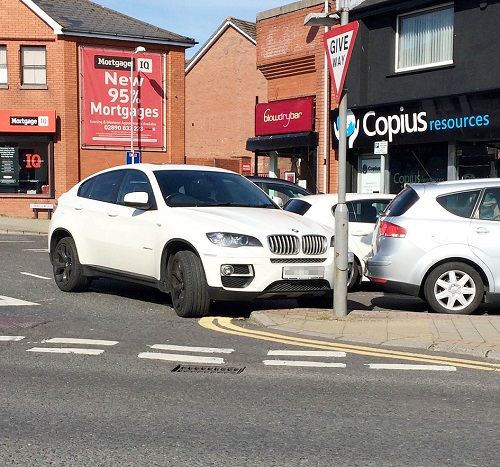 TIGHT SPOT: This BMW 4X4 was imaginatively parked in Glengormley; above left, no way out

AS Squinter’s oul’ lad might have said: ‘That’s not parked, that’s abandoned.”

A mid-afternoon drive through sunny Glengormley reveals quite possibly the most hilarious piece of parking Squinter has ever encountered. This white BMW XWhatever, right, is hemming in two cars and restricting left turns from the side road on to the main Antrim Road, but on the upside it was giving a quare laugh to every passing motorist and pedestrian.

Which raises once again the question: how come drivers of fancy vehicles are so much more likely to park wherever they feel like it, whenever they feel like it? A touch of arrogance, no doubt. A sense of entitlement too, perhaps. Mostly the poor parking is an attempt to protect a valuable piece of metal. How often do you see large and expensive vehicles parked diagonally across two bays in the supermarket car park? The drivers do it not because they are inept – nobody could be that bad at parking – but because it keeps other cars away and avoids paint-scrapes and trolley dents. But this driver’s asking for trouble with his paint job if the guy nearest his boot tries the tricky, not to say impossible, task of backing out.

Squinter can put his hand on his heart and say he’s never had a parking ticket; never had a speeding ticket either, touch wood, although he did get pulled once passing through Fivemiletown on the way back to Belfast from Sligo. Must be 20 years ago now and the Trevor who tugged him informed him that he had been doing 37mph in a 30mph zone. Here we go, thought, Squinter, as he took out his wallet and searched for his licence. Unfortunately – or with the benefit of hindsight we can now say fortunately – he had put his press card over the top of his licence and as Squinter removed them both the RUC man’s interest was piqued by the bright yellow and black NUJ accreditation to the fore.

“A journalist, eh?”
“That’s right.”
“Really?” he added as he took the press card and studied it with great interest, leaving the licence in Squinter’s hand. “What paper do you work for?”
Now Squinter’s not what you would call Mensa material, but he does recognise an out-of-control quarry lorry coming down the Hannahstown Hill when he sees one. And he immediately twigged that in rural County Tyrone the words Andersonstown and News were not likely to render this roadside encounter any shorter or any less painful.
“Freelance,” he replied with a wide and sickly smile.
“What’s that?”
“Work for myself. Write stories and sell them to any paper that’ll buy them.”
“Well, write something nice about us.”
“Will do.”
And with that, Squinter was off, with a warning to watch the signs in the future. As for that promise to be nice to the RUC – as with the scrapping of the force four years later, it’s a case of better late than never.