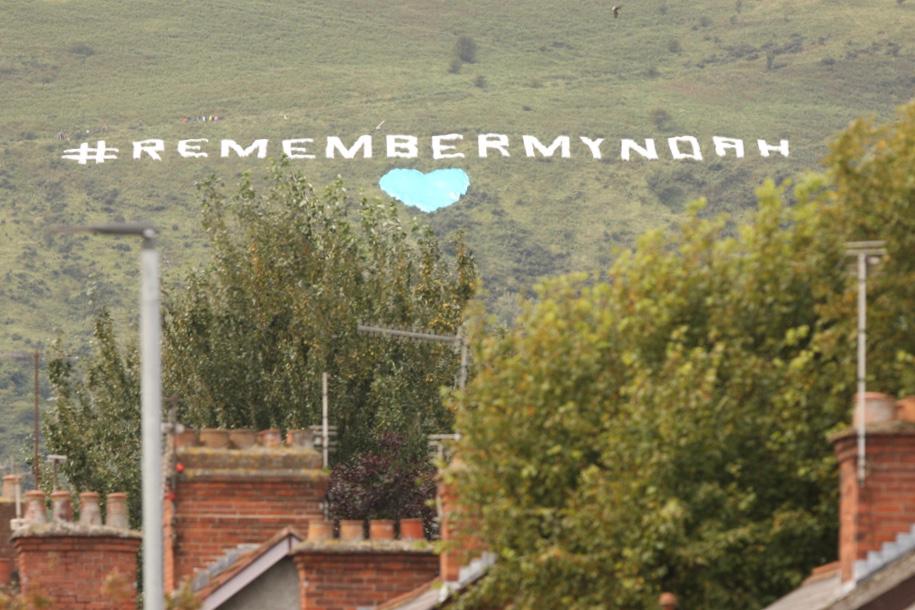 SUPPORT: The new mural on the Black Mountain

A HUGE new mural has appeared on the Black Mountain overlooking Belfast in support of the family of Noah Donohoe.

The message 'Remember My Noah' was created by Gaelforce and is part of a wider campaign to get answers around the 14-year-old's disappearance and death.

The message of support comes after Belfast City Hall was bathed in blue this week to mark nine weeks since Noah's disappearance and death. A number of murals have been painted in the city highlighting the case.

Noah’s mum, Fiona has set up Facebook and Twitter pages and in an interview published on the pages, she said the social media campaign is all about getting answers about Noah.

Yesterday a Belfast pre-inquest examining the South Belfast boy’s death heard there is no evidence that he was attacked, or that any other person was involved.

Noah’s mum Fiona attended the pre-inquest, where she watched nine minutes of CCTV footage of Noah travelling on his bicycle before his disappearance.

"While this nine minutes represented the most harrowing experience of Fiona Donohoe's life, to view the last recorded moments of Noah, she is appreciative of having had the opportunity to do so," solicitor Niall Murphy, representing the family, said.

"Fiona acknowledges that the compilation is not a constant continuous video track of Noah's movements and notes that there are blind spots in the journey, particularly, and perhaps most relevant, the sensitive part of the journey from Skegoneill Avenue to his final sighted destination".