Retiring after fifty years on the road 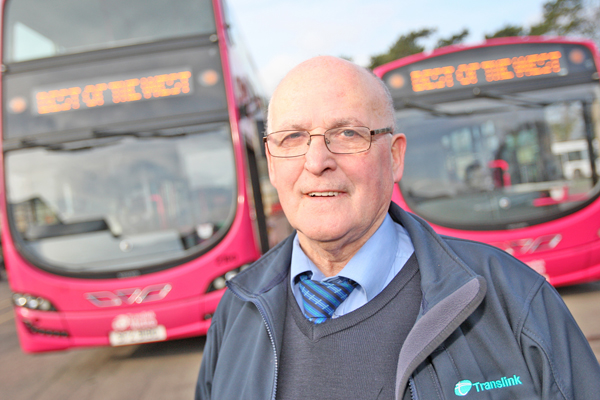 ANDERSONSTOWN bus driver Kevin Maguire has dedicated most of his life to making sure we all get to where we need to be and he wouldn’t have had it any other way.

“The buses have been very good to me,” said Kevin, “that’s where I met my wife Deirdre. She was a passenger on my bus and I chatted her up, I was a good looking lad in my day!”

During the Troubles, driving a bus in Belfast was often a dangerous occupation.

“One night the Falls Road depot got set on fire and thirteen buses were burnt out, this was back in the days when there were no mobile phones” said Kevin.

“We had to stay at the depot all night to help out and make sure the service was up and running for the public by morning. When I got home the next day my wife was furious, she was worried sick about me all night, but that’s just the way it was then.”

Married for thirty years before Deirdre’s unfortunate passing fifteen years ago, Kevin has two children and four grandchildren and will soon be leaving his Translink job.

“I’m retiring in April after almost fifty years. I started in 1967, I was a conductor for seven years, then in 1974 I started driving and that’s been me ever since.

“I think I’ve been hijacked four times. One time I was getting robbed in Ladybrook, your man robbed me and he only got about £13. He turned round and handed me a pound and said ‘here you go driver, get yourself a drink’ – I wasn’t long telling him what to do with himself. I was getting hijacked one day and the fella said to me ‘What are you?’ I said I’m a bus driver, I got a dig in the gob for that one.

“Another time I thought this fella was running for a bus and I slowed down and opened the doors, he grabbed my tray and ran off the bus with all the money!”

There was one very unfortunate incident on the Glen Road many years ago that Kevin has never managed to live down.

“The Brits used to pull us over and make us turn our lights out,” he recalled. “This one night I was driving past the Roddy’s, the next thing I knew a horse ran out in front of me and I killed it stone dead!

“I hit the poor thing and every day from that right up until this very day I get slegged about it in the depot. I’ve been called the horse killer and Shergar for years. It was a genuine accident, the poor horse!”

The thought of retiring doesn’t bother Kevin as he will find plenty to occupy his time. One of his neighbours called into his Glenshane home when I was interviewing him and  said: “I would be lost without Kevin, he does everything for us. We are so lucky, he is like a granda to me.

“He cuts the grass for all the neighbours in the good weather and he goes and does messages for people.  We are all so lucky to have him, we all love him.”

Kevin’s good friend and co-worker Martin Hamill said: “Kevin is so well thought of in the depot, he would do anything for you. He would swap shifts if someone needed to go somewhere, he was always very obliging.

“We’ve worked together for almost 40 years. He was off sick recently and all the school kids would ask how Kevin was every morning until he came back. He’s a great man, we all have so much respect for him.”

Kevin added: “I’ve had many happy years working on the buses. We had our dark days when some of our drivers were shot dead, that was hard to get over.  It was a horrific time. You were going up roads and you weren’t sure if you were going to come down them again.”