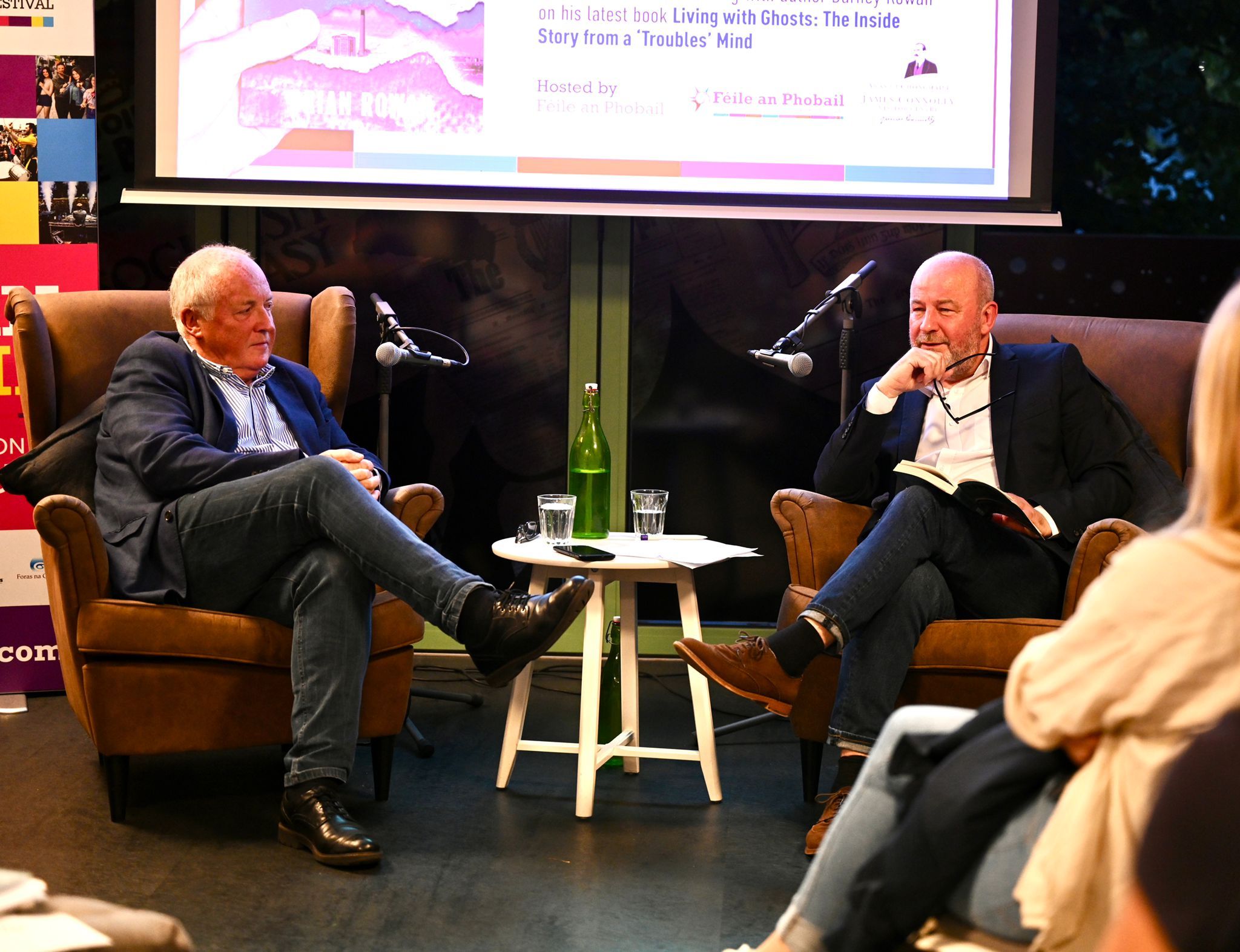 INSIGHT: Barney Rowan, right, talking to Mervyn Jess at Áras Uí Chonghaile Pics: Above and below by MT Hurson

Journalist Barney Rowan launched his new book Living With Ghosts, The Inside Story From A 'Troubles' Mind at Áras Uí Chonghaile on the Falls Road last night. He looks back at the event...

IT was one of those moments when you sit up and pay attention; a festival conversation on the Falls Road on Monday, in which detail was added to our knowledge of key moments in the peace process. The first, in 2005 and, then, two years later, in 2007.

From the audience, Séanna Walsh spoke of that moment when he was asked to read to camera the IRA statement that ended the armed campaign, telling us how he talked it through with his family before agreeing to do so.

On Monday, I had brought that statement along with me to include it as part of a conversation on my new book – Living With Ghosts, a conversation facilitated by long-time colleague and friend Mervyn Jess.

The statement, was given to me on July 28, 2005, by the IRA 'P O'Neill' – along with a DVD showing another Belfast republican Séanna Walsh reading the statement.

Given the historical significance of that moment, I had later asked him to sign it, and I shared this story with Monday's festival audience.

Then, there was another contribution from the floor. Former Lord Mayor Tom Hartley spoke of how a visit he and Sinn Féin party colleague Jim Gibney made to the Braniel estate in January 2007 helped open a path for Gerry Adams to attend the funeral of David Ervine.

My wife, Val, had driven them there, picked them up at the City Hall and travelled the route along the Albertbridge and Upper Newtownards roads, on to the Knock carriageway and into the Braniel.

History and conversation.
At the launch of #livingwithghosts in West Belfast earlier, @WalshCllr recalls that moment in 2005 when he was asked to read the IRA statement ending the armed campaign.
Pic @mthurson@FeileBelfast @JamesConnollyVC@MerrionPress pic.twitter.com/l4BfKtIHDo

Hartley, described an hour-long "beautiful conversation" with David's wife, Jeanette, and how he and Gibney were thanked by a group of loyalists who arrived at the house as they were leaving.

In my book, Gibney describes the decision to go to the Braniel as "spontaneous and a gesture of sympathy to a grieving family".

He continued: "It wasn't politically motivated. Tom and I just wanted to let David's family know that he was being grieved beyond them. And in circles most unlikely. We wanted his family to know that republicans appreciated the contribution that David had made to peace. And we wanted to tell Jeanette that ourselves."

On Monday evening, Hartley explained that when they returned to the Falls Road, the first question was about why they had not told anyone that they were going to the Ervine family home, but, then, the conversation quickly moved to "how they were received".

In Living With Ghosts, Jeanette Ervine comments: "You had put it to me that they wanted to come, and I didn't hesitate and they were welcomed. If they thought that well of him [David], why would I refuse?"

Days later Adams, with Alex Maskey crossed the lines from west to east Belfast, stepped onto the Newtownards Road and into the church for the funeral service. I write in my book that inside the packed church we could touch the significance of that moment.

This was peace working.

Just months later we witnessed the formation of a once unthinkable Paisley-McGuinness Executive at Stormont.

For years, I have participated in festival events in West Belfast, chairing conversations involving the late Martin McGuinness and loyalist William 'Plum' Smith, and, then, McGuinness in conversation, with Chief Constable Sir George Hamilton.

The events are a visual and talking confirmation of what has changed here –- moments of learning; what peace is meant to be about.

And on Monday, Séanna Walsh and Tom Hartley added to that script.

I tweeted after the event: The more we talk, the more we begin to understand each other. We've done the hard bits – the 'wars' are over. The political noise of now is the fear of change.

Living With Ghosts, The Inside Story From A ‘Troubles’ Mind is published by Merrion Press, £16.99.