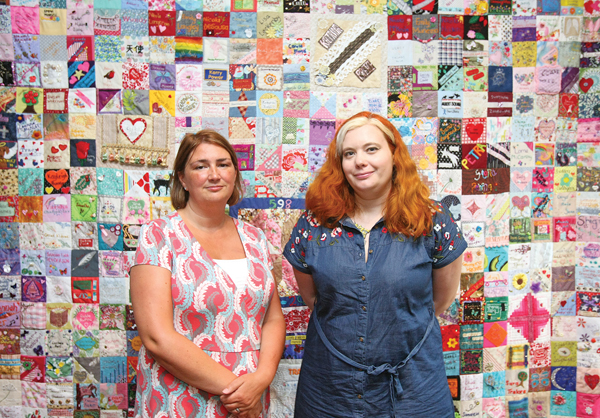 AS part of their enduring Féile an Phobail collaboration, Relatives for Justice (RFJ) joined their iconic Remembrance Quilt with The Women’s Quilt to highlight the loss of life through domestic violence.
The victim’s support group had extended an invitation to Labour and Co-operative councillor Roxanne Ellis to bring the quilt over to commemorate the 598 women killed by their current/former partner’s between 2009-15 across the water. Roxanne explained how the quilt is a reminder that each woman is not just a number but a name.
“The thing that connects the two is the dignity and strength of the survivors,” explained Roxanne. “People who have survived domestic violence always seem to have this inner strength within them and the quilt will hang alongside RFJ’s for the duration of the festival. People can ignore numbers, we needed something else to make femicide real.”
RFJ’s deputy director Andrée Murphy said she had come across The Women’s Quilt on social media as it was made to highlight International Women’s Day last year, “and I contacted Roxanne around the two being displayed as part of Féile’s 30th year.” “This particular campaign for justice for women, I felt worked alongside our own project looking at harms against women. There were 21,000 reports of domestic violence to the PSNI last year so our own statistics are very poor. I would encourage as many people as possible to come and view it.”