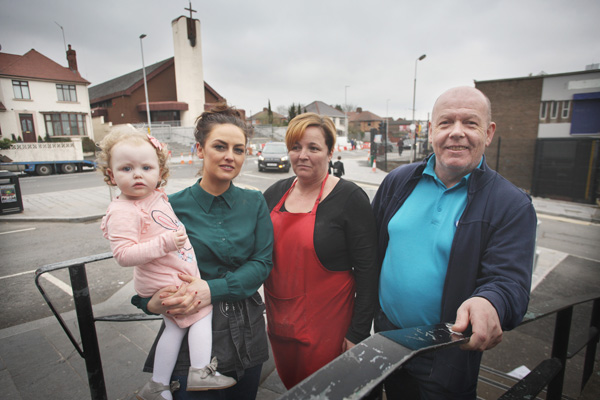 A LOCAL business owner is on the brink of shutting up shop, claiming the ongoing roadworks on the Andersonstown Road have caused a 25 per cent fall-off in business.

Work on the Belfast Rapid Transit system (BRT) is due to be completed this summer and has sparked frustration amongst motorists and business owners on the road for over a year.

“Customers confessed they have been put off coming to the business hub for a bite to eat or to pick up odds and ends due to traffic congestion or lack of parking as a result of the ongoing road works,” said Paul. “As a business owner you expect January and February to be slow, especially with the snow, but this is April and it hasn’t picked up. We have seen a 25 per cent drop in customer footfall since the roadworks moved here and things have only got worse since the leisure centre and nearby banking facilities closed. You used to make a small recovery over the weekend, but even that’s being taken away with the roadworks closing the Falls Road the past few Sundays.

People just avoid this end of the road and as a result we experienced our worst Sunday business since opening last year. All the shops have noticed a drop in business and as a result some of us won’t be here much longer. It’s very unfortunate.”

Although the work is due to be completed within months, Paul believes it could be too late to salvage his business after people turned to alternatives away from the road to avoid the disruptive roadworks.

“People won’t just drop their routines and start returning when the roads are clear again – they have become regulars at other cafes and shops across the city that they can access now and will continue to take their business there,” he said. “When Casement is finally given the go-ahead residents and business owners are once again going to have to struggle through the same nightmare all over again.

“If things don’t improve we are going to have to move on somewhere else. In fact, I’ve already given notice to the landlord so it won’t be long now. I don’t want to go but the business has a better chance somewhere else. It’s not like we have been given rate relief or anything in light of the works. We pay our rates and tax just like all the other businesses across the city whose trade remain accessible.

“This used to be a thriving hub on the road where people could run errands then stop off for a bite or pop in for their odds and ends, but the banks, the facilities, everything has gone and parking is non virtually non-existent even if they are able to get up here. It has definitely hit all the businesses hard and we can only hope things will improve again once the eyesore is complete.”

Neighbouring businesses echoed his plea to the Department for Infrastructure to take responsibility and acknowledge the damage to the local economy as a result of the ongoing roadworks.

A DfI spokesperson claimed that the department has sought to “balance the needs” of local residents and business owners, adding they had opened a new 100-space car park in the area (between Biddy Duffy’s and the PD).

“In scheduling these works, which by their very nature are disruptive, the Department has sought to balance the needs of local residents, businesses and commuters,” the department said. “The BRT roadworks are due to be completed in the summer, prior to the BRT Glider services going live in September. The Department appreciates the ongoing patience and support of the local community.

“Before the BRT works in the Andersonstown area commenced in January, the Department, in partnership with Belfast City Council and the GAA, opened a new 100-space car park to alleviate some of the potential impact of the works on local car parking.”