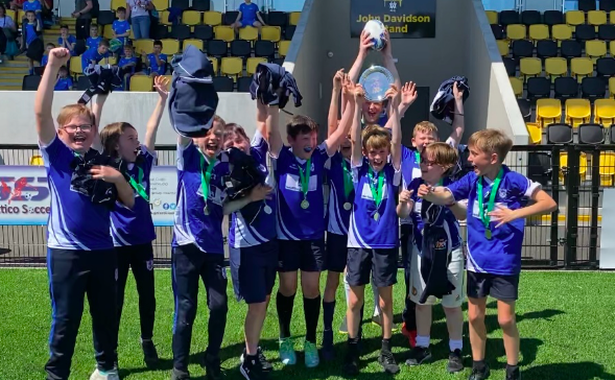 The girls tournament was held at the Ballybeen Sports and Wellness Hub on Friday, June 16 and the boys was held at The Blanchflower Stadium on Monday, June 20.

Both tournaments had eight primary schools competing with almost 100 girls and boys attending each event.

Stan Cinnamond, Club Community Rugby Officer for Civil Service (NI) Rugby Club, who delivered the rugby sessions said: “The programme has been designed to play rugby in a fun environment to see if the children enjoyed it.

“If they do, then there is a supportive pathway for them to play mini and youth rugby at Civil Service (NI) Rugby Club at Stormont.”

Civil Service (NI) Rugby Club has coached nearly 1,800 children from P6, P7, Y8, Y9 and Y10 in schools throughout South and East Belfast during the season.

This has led to approx 175 children attending rugby programmes at Stormont in the 21-22 season with the club establishing an U12 boys development squad, U12 girls and boys squads and U14 and U16 boys squads from scratch in one season.

“The tournaments were the culmination of the extensive coaching programme that we provided in the primary schools and it was great to see the children representing their schools and getting the opportunity to play their rugby in a challenging and competitive environment against children from other primary schools of a similar standard,” Stan added.

Phil Kennedy, Youth Rugby Convenor at Civil Service (NI) Rugby Club, who oversees the development of all youth rugby within the club said: “We are both overwhelmed and delighted with the extraordinary uptake of rugby within our re-established youth rugby section last season.

“We have a great team of coaches that have supported the newly set up teams throughout the season and we openly welcome any other children who wish to play either mini rugby or play for the U12, U14 or U16 teams next season, regardless of experience.”

Phil Anderson, Club Chairman, who has steered the club through this period of growth and development added: “As a club we took the decision to invest heavily in youth to ensure the club’s continuity in what was our 100th year as a rugby club.

“It has clearly paid off last season and we hope that this will eventually result in the growth of our senior section which currently runs two teams in the Ulster leagues on Saturdays.”

Any children (Y8-Y14) that are interested in trying rugby with our Youth section should contact Arthur Kerr at arthur.kerr1959@googlemail.com tel: 07888738238.