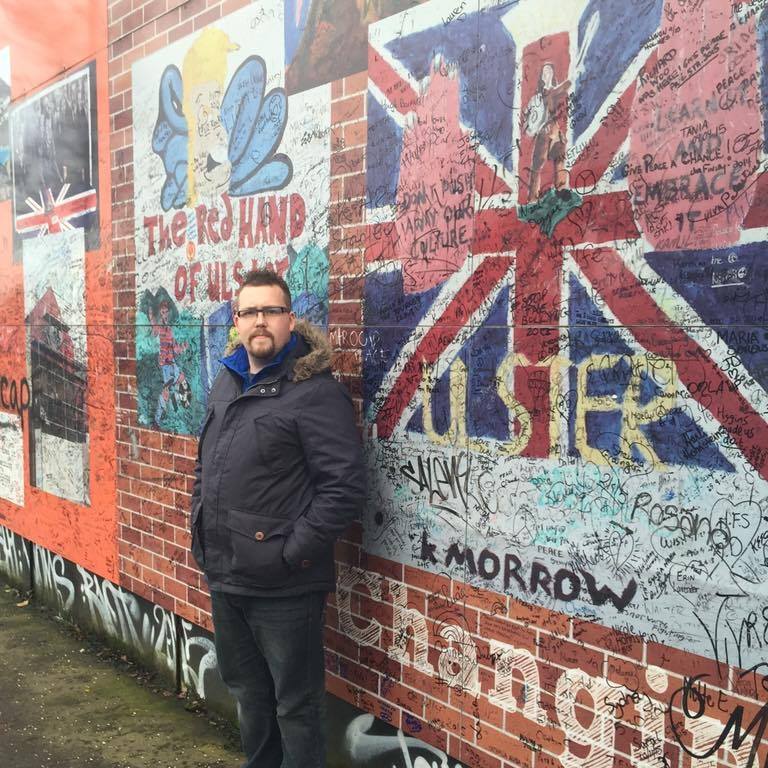 Kris McGurk, Chairman of the Regimental Blues, who are set to move into Camp Twaddell for a week

The chair of the Scottish loyalist group hoping to revive support for Camp Twaddell by staging a week-long occupation said that he has not ruled out his group moving in permanently.

Kris McGurk, Chairman of the Glasgow-based Regiment-al Blues, denied that his group’s plans were designed to raise tensions in North Belfast ahead of a planned parade to mark 1,000 days since the camp was erected and insisted their presence at the camp is welcomed by the loyalist community.

The Regimental Blues, who have organised local campaigns in Glasgow against the erection of a tricolour on a council building and a protest against a Bloody Sunday parade in Glasgow, plan to man the camp 24 hours a day from tomorrow (Friday 1) for one week.

Mr McGurk confirmed that the group had only engaged with the camp’s committee and saw “no reason” for wider local interaction.

“There hasn’t been any engagement with local businesses or residents,” he said. “When it comes to engaging locally it hasn’t been done. I don’t see the need for it to be done, purely because they won’t notice a difference in us being there.

“We won’t be doing anything out of the ordinary, if we were to go over there and things were to change dramatically, then as an individual I would no doubt be saying that we could maybe inform other organisations and locals, but we are not.”

“The loyalist community in Belfast are used to having their leaders leading them down the garden path with false promises. It always seems to be the unionist politicians who are conceding the points,” added Mr McGurk. “What we are seeing now is the loyalists forcing community reps to dig their heels in firmly, we wanted to show that if you dig your heels in on this one, as long as the support is there we won’t be conceding the points. The main message is support, showing that loyalists in Belfast do not stand alone.

“If our community in Belfast go through something we all feel it. Regardless if you’re a loyalist in England, Scotland or Wales, the same down south.

“It’s all the same, we all go through the same thing. We all support each other and this is really about demonstrating that we can and will support Belfast.”

Mr McGurk said that he hoped to rebuild support for the camp and help put the community in a position “to start fighting back properly” but stressed that their methods are peaceful.

“We’re not going there to cause tension, we are going there to concentrate efforts on the end goal which is getting the parade up that road. Our campaign will be peaceful, organised and there is no hidden agenda.”