Seamus’s inside story of life on the blanket 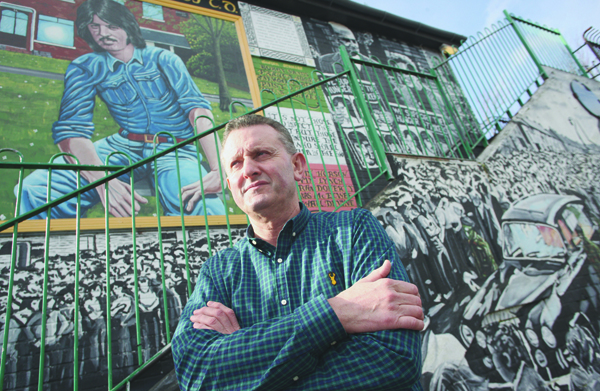 THE COURSE of Irish history has been marked by insurrection against British rule. The impacts of the various campaigns have been extensively debated, but certain events, such as the republican struggle against criminalisation in the H-Blocks and Armagh Gaol, are almost universally recognised as catalytic in effecting social change.

While we know the blanket protest and the deaths of 10 men on hunger strike would completely alter the political landscape in Ireland, the lived experiences of the blanket men and women and the horror they endured is much harder to comprehend.

As part of wider effort to tell the prisoners’ stories, ex-prisoner Seamus Kearney, who is one of hundreds of people who experienced the ordeal of the H-Blocks, is set to give a talk on his time in prison in St Gall’s GAC on Friday.

Seamus was arrested during an IRA operation in Finaghy Road North and was imprisoned in January 1977. He was placed on remand in Crumlin Road Gaol where he admits he was looking forward to some rest after years of struggle, but he didn’t know what to expect.
His imprisonment coincided with the building of the H-Blocks, where the first blanket man, Kieran Nugent, had begun his protest against criminalisation just three months earlier. At that time, however, Seamus said, “Nobody knew what way the jails were going.” Indeed, during an early encounter with Kieran Doherty, who would die on hunger strike in 1981, he was informed that his comrades were “disappearing off the face of the earth” after sentence.

After his own sentencing, Seamus was moved from the Crumlin Road to H-Block 1 in June 1977. It was there that he first met future hunger strikers Kevin Lynch, Thomas McElwee and the then block OC, Bobby Sands. During their short time in H1, which was then used as a transitional block, Seamus and his comrades resolved to join the blanket protest. Non-conformity meant being locked in a cell for 24 hours a day and a ‘Number 1’ starvation diet.

“After refusing a uniform you were told to strip ‘everything’,” he said.

“It was all men looking at you, so it was a bit weird. They put the clothes into a brown bag and I remember thinking to myself ‘I’m going to get them back.’

“It seemed quite daunting because I thought I was getting some R and R,” he added.

“We ended up in H5 and took each day as it came. One day led to another. Your legs start getting tingly from the lack of exercise, but the idea was to keep walking to keep moving.

“After a few months, we were lucky, because at the end of January 1978 Brendan Hughes, ‘The Dark’, arrived. I ended up in cell next to him. Bobby ended up at the far wing of H5. Getting Brendan Hughes was amazing. He was already a hero, even then.”

According to Seamus, the arrival of Brendan Hughes, who took up command in the blocks, was pivotal in the escalation of the prison protests. The blanket men were isolated from the outside world and the British government was “winning the propaganda war”, but with the men voting in favour of Brendan Hughes’ idea of no-wash protest in February 1978, the protest began gaining public attention.

“We needed to recalibrate,” Seamus said.

“It was then that we were told that this was not a local jail dispute. This was a part of governmental policy and that it was bigger than we thought. I think the Brits thought we weren’t of the same calibre of Connolly or Pearse – that we would do what we were told. But they were wrong. They were hitting a raw nerve and they didn’t realise it, and maybe we didn’t. We weren’t thinking about what it all meant, but our backs were against the wall.”

Seamus continued: “It was about attracting national international interest. We had to open new lines of communication to the outside world and get our story out there, because at that time they were winning the propaganda war.

“We were already getting harassed on the way out of our cells, so The Dark said we were going to exploit that going into the no-wash protest. The screws were already beating some of the lads. You were going out one cell at a time and it was one man being hit by about 12 screws.”

Seamus was soon moved to H5 where he lost Brendan Hughes’ counsel, but said he and his comrades were emboldened at the onset of the no-wash protest. Their ingenuity in sending communications within the blocks and to the outside world is now legendary. It was during that time, amid increasing brutality from the screws, that the prisoners took the decision to smear excrement on walls – a decision that Seamus said was taken reluctantly.

“We didn’t know how we would even do it – the mechanics of it,” he said.

“We were improvising again. Some bright spark, Tom Martin, had the idea of taking a piece of the mattress and using it as a sponge. That seemed to be the only way to do it. Eventually we did it together. We started smearing it on the wall – it was horrible. After about two weeks the screws went ballistic. I remember the screw opening the cell door and saying ‘you dirty bastards – you fucking animals.’ I think that’s when the real hatred started forming. We didn’t feel good about putting it up anyway. We weren’t animals, but we felt that we had to do it to highlight the case.”

Seamus recalls 1979 as bad year for the blanket men, particularly in ‘an seachtain dona’ (the bad week) of April that year, when “people were literally beaten off the blanket”. He said the remaining blanket men were determined to “save the IRA from obliteration” and, often, it was comedy that got them through. While you were getting beaten you were still laughing,” he recalled.

Seamus tells with a smile of a visit from an old neighbour who cajoled him into singing ‘Smoke Gets in Your Eyes’ by Bryan Ferry – a move that brought applause from the visiting room and, later, a beating from the screws. Needless to say, she never visited again.

While the torture endured by the blanket men was immense, Seamus faced one of his toughest challenges when he received word that the IRA had executed his brother, Michael Kearney, as an informer in July 1979. The screws initially mocked his brother’s death, but later offered supposed salvation and a chance to leave the blanket. Michael’s name would not be cleared until 2003 when it was revealed that he had been killed at the behest of IRA informant Freddie Scappaticci, codename Stakeknife. However, Seamus remained undaunting in his commitment to the IRA during his 10 years in prison.

“I gave him my blessing to join the IRA,” he said.

“I felt he betrayed me and he betrayed Ireland. I didn’t know what I was going to do. Everything stood still.
“I was in the middle of no-man’s land. I was neither with the IRA or the British and I felt shell-shocked. The first thing that went through my mind was ‘What am I going to tell the lads?’

“It was the first time I realised the distinction between mind and body, which you’ll not understand until it happens,” he added.

“My body was telling me I’d had enough – I was starving, I had lice, I had dysentery – but my mind was saying, ‘Tell them (the screws) to fuck off.’

“I told them I had lots of brothers. There were 300 of them, one of them was dead, but I had Sean on the outside and I had brothers in the H-Blocks.

“I told the lads that the only way they would take me out is if they carried me out. They weren’t going to break the back of the IRA.”

The H-Blocks saw a hunger strike in 1980 that saw the British government renege on a deal it had struck with the prisoners. Tragically, 10 men – Bobby Sands, Francis Hughes, Raymond McCreesh, Patsy O’Hara, Joe McDonnell, Martin Hurson, Kevin Lynch, Kieran Doherty, Thomas McElwee and Michael Devine – died on hunger strike the following year. Of the 10 that died, Seamus knew six of them personally, and he vividly recalls the last time he saw Bobby Sands during Mass in February 1981.

“At the end of the Mass Bobby went round the lads clockwise,” he said.

“He came to me and smiled and said ‘I see you’re still here,’ and I knew it was in relation to our Michael. I said ‘There’s nowhere else to go, Bobby.’ He looked straight into my eyes and said ‘Good man – goodbye.’

“I had doubted him. Most of our wing had doubted him. To me he was just like a Rod Stewart lookalike. I had given him the words to ‘This Old Heart of Mine’ before – he liked that song. When I looked into his eyes that Sunday they were like a shark’s eyes. He had resigned himself and I knew he was going to go through with.

“The hunger strike was a formality. Bobby didn’t really die on May the 5th – he died in February. One after another they died and it was like losing a part of yourself. It was the same reaction I had to losing our Michael. It was like losing brothers. It was so catastrophic – and it still is.

“Maybe it’s a physiological thing that I don’t understand, but when I talk about it I can still feel that emotion as if it was yesterday and I still struggle to get over it. I know I speak for a lot of the lads who can’t have this conversation, but something broke inside me.”
Those who knew the men who died most keenly feel the sadness of 1981. For Seamus, the death of his friend Thomas McElwee, who he knew from H4, was most difficult of all, and one that he finds most painful to speak about. He talks about his friend fondly, and will no doubt do so as he tells his own chapter in the dramatic account of the blanket men.

“You are trying to bring people into that world and a lot of the lads can’t talk about it – most of them don’t,” he said.

“For me, you don’t just talk about the protest, you actually relive it. Once you open that Pandora’s box you don’t know what you’re letting out, so a lot of the lads keep it closed.

“Today, with the rise of Sinn Féin, the republican movement is healthy. It is a direct result of the fight against criminalisation. We thought it would be a footnote in Irish history, but it became a pivotal moment. Of the ten men who died on hunger strike I knew six of them personally. It was such an intimate death for all of them that it’s difficult to talk about.”
Seamus will give his talk about life on the blanket in St Galls GAC this Friday evening, March 1, at 8.15pm. All are welcome to come along.