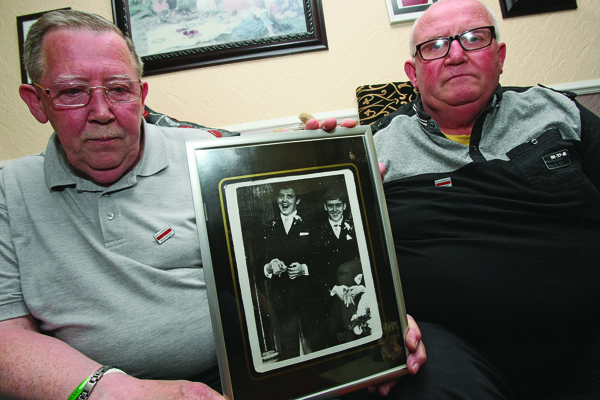 FRANK Quinn was born on April 21 1952 at 2 Coates Place in Divis Street. He was one of six children born to Tommy and Grace.
He had three sisters Irene, Annette and Marion and two brothers Liam and Pat.

Frank married at the young age of 17 to his beloved Ann. They had one young child, Angela, and Ann was pregnant with their second child who was named Frances in memory of her father.

On August 9 1971 Frank was fatally shot by a soldier from the British Army’s Parachute Regiment as he went to the aid of Father Hugh Mullan during what would become known as the Ballymurphy Massacre.

The Andersonstown News spoke with Frank’s brothers Liam and Pat to find out how their lives changed when their brother was murdered during those three fateful days in Ballymurphy in 1971.

“Our father worked in Stranmillis in a builders’ yard for 38 years, in 1964 we moved there and my father rented a house from his employers,” recalled Pat.

Liam said: “Another reason why we moved to Stranmillis was our mother always wanted a garden. She loved it there beside Botanic Gardens and the museum. We got on with all the Protestant people who lived there, there was a small community of Catholic people there but we all got on, it was okay.”
Describing the build-up to Frank’s murder Pat said: “Frank and Ann got a maisonette up in Moyard, he was only there for seven weeks. I was 14 at the time, I loved staying with them and running to the shop for them.

“Our Frank worked as a window cleaner, he was a geg, he had me tortured – we were very close. He left me to the bus stop at the bottom of the Springfield Road one day and said ‘see ya later kid’. Next thing internment came in.”

Pat continued: “Late one night it came on the news bulletin that a Catholic priest had been shot in the Ballymurphy area. It said that a young man had been shot alongside him and my mother said ‘somebody is going to have a sore heart tomorrow’.

“My father went to work the following morning – my mother worked part-time in the Monarch Laundry on the Donegall Road. I was in the house on my own, it was about 10am I think, and I heard this banging at the door.

“I walked down and I saw my daddy, he was in a terrible state, he was distraught. I asked ‘what’s wrong daddy?’ He said Frank was shot. I asked was he wounded, he walked past me and sat on the bottom of the stairs and said ‘no, he’s dead’ and I can’t remember anything after that.”

“I remember people coming round to the door and my mummy being brought home, she was like a ghost. That’s when my whole life changed.”

Taking up the story Liam said that after Frank was shot dead it was reported in the papers that he was an IRA gunman.

“The neighbours turned their backs on us, I had to go and get a lorry and move my parents out.

“There was a young policeman who lived at the top of my parents’ street, he came down and stood at the door when we were taking the furniture out. He said ‘nobody will do anything to annoy you’.
“Frank had to get buried out of his mother-in-law’s home in Divis Flats. I felt sorry for my parents because their son wasn’t being waked from their own house.

“One night during the wake there was a gun battle on in Divis Flats. My mother got up and put her arms around the coffin and said ‘he’ll not be shot again. I had to pull her down.”

Liam continued: “I remember the day of the funeral, walking up the Falls Road and getting to the City Cemetery at the bottom of the Whiterock and this big brute of a Saracen stopped and a soldier got out and saluted as the coffin went by, I was enraged but my da said ‘keep your dignity son’.

Describing the aftermath of Frank’s murder Liam said: “Not long after Frank died my son Francis was born, then poor Ann gave birth to her and Frank’s daughter and called her Frances.

“I walked onto the ward to see Frank’s daughter, it killed me, it should have been him there, instead I was there representing him. That’s the saddest thing of all to me.

“He missed events in his life that he should have been there for. He’s a granda and a great granda now and he missed out on it all, there’s not a day goes by that we don’t think of him, he was a character, we loved him.”

Discussing the effect Frank’s death had on his parents Pat said: “They were never the same. Christmas was never celebrated after Frank died, there was never another tree put up in our mother’s house, there were times when I could hear them crying.

“After our daddy died she just said she wanted to be with him and Frank, she said she didn’t want to be here anymore.”

Talking about the upcoming hearing for the Ballymurphy Massacre families in September the brothers say they are used to knockbacks but it only makes them more determined to get justice for their brother.

“We’ve been promised everything by politicians in the past then it’s amounted to nothing, but it makes us more determined,” said Pat.

“People have asked ‘but do you think you’ll get anywhere?’ I say to them just you stand there and watch us. There’s still a fight ahead here, we don’t trust the British government at all, but we are definitely getting there.

“They’re under pressure here, claiming they can’t trace soldiers and that UVF statement last month was just ridiculous. It knocks the stuffing out of you but you pick yourself back up and keep fighting.”