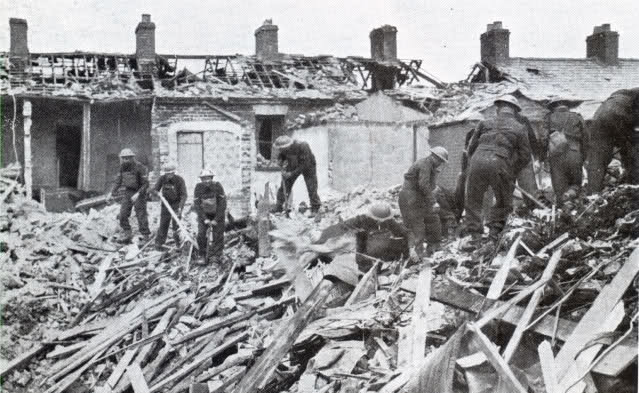 Walton Street off the Crumlin Road was hit by German bombs

One hundred and thirty North Belfast residents who lost their lives during the German bombing of the city 75 years ago are to be remembered at a special ceremony organised to mark the anniversary.

On Sunday, April 17, an ecumenical service of commemoration will be held in St Anne’s Cathedral in conjunction with St Patrick’s Church, Donegall Street. The service, at 3.30pm, is open to the public and candles will be in a symbolic reflection on those who lost their lives during the Blitz.

On April 7, 1941, the first of four Luftwaffe raids on Belfast resulted in 13 deaths, 12 in the dockside area, during the overnight raid.

However, it was the second raid on Belfast, which began on Easter Tuesday, April 15, and continued overnight, which saw the heaviest death toll in the north of the city. Around 180 bombers dropped 200 tons of explosives and 30,000 incendiaries, causing massive devastation.
A third attack targeting the shipyards and aircraft factories on May 4/5 became known as the Fire Raid because of the number of properties left blazing after three hours of bombing.
The next night, 460 bombers attacked targets across the UK. It was fortunate that just three aircraft targeted Belfast, because by that stage two-thirds of the city had no water and air defence measures were virtually non-existent. In total 740 civilians lost their lives in Belfast.

The public service being held in St Anne’s Cathedral will mark the end of a weekend of commemorations, which will begin with the unveiling of the first in a series of memorial plaques at St George’s Market at 10.30am on Friday, April 15. The market was used as a temporary morgue during the Blitz. A solemn ceremony will begin at noon at the NI War Memorial Gallery, which is open to the public. Other events over the weekend will include a lecture by Dr Brian Barton, author of The Belfast Blitz: The City in the War Years, in the Bobbin coffee shop in City Hall on Friday, April 15 from 6.30pm to 8pm. A sound and light presentation will then take place in the grounds of City Hall, accompanied by a screening of the names of the dead on the big screen. A Blitz-themed family open day will take place in the Northern Ireland War Memorial gallery in Talbot Street on Saturday, April 16 from 10.30am to 2.30pm. A 1940s-themed tea dance will be held at the Ulster Hall on May 2.

Dr Barton said: “North Belfast bore the brunt of the Luftwaffe attacks particularly on that Easter Tuesday. Streets such as Atlantic Avenue, Hillman Street, Duncairn Gardens and Unity Street have all become synonymous with the Blitz because of the severe amount of damage caused.
“You only have to look at the records of St Patrick’s Church to see that 130 parishioners lost their lives, this gives you an idea of how widespread the devastation was. The impact on Belfast was traumatic. Over 1,000 people were killed in the four raids, in addition 56,000 houses in Belfast, that’s over half, were destroyed or damaged. Figures show that almost half the population fled the city, assuming that the Luftwaffe would return.”