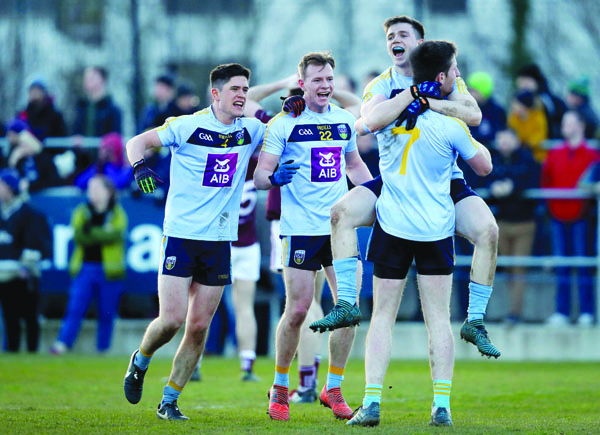 Peter Healy, pictured above, second from left with Conor Mullally, Cillian O’Shea and Jimmy Feehan, celebrates UCD’s Sigerson Cup win over NUIG last Saturday. The previous weekend, Healy was part of the Antrim side which suffered a disappointing home draw to Wicklow. The Saffrons will seek to bounce back when they face London in Ruislip on Sunday

FRESH from helping UCD win the Sigerson Cup last weekend, Peter Healy has stressed Antrim must learn the lessons from their disappointing draw against Wicklow when they take on London in Ruislip on Sunday (throw-in 2.30pm).

Healy played a key role for the Dublin university as they saw off the challenge of Ulster University in last week’s thrilling semi-final which UCD won 0-18 to 1-13 after extra-time in Inniskeen.

The St Enda’s clubman then played the entire game as UCD defeat NUIG 1-13 to 2-9 at Trinity College Dublin’s Santry Sports Grounds on Saturday.
After losing last year’s Sigerson final to St Mary’s Belfast, Healy was delighted to go one better this time around.

“It was unbelievable – it was a great achievement,” said Healy.
“It is very different from club or county, it is a different atmosphere.

“You are playing with your mates from college and obviously, the standard is huge.
“You know what you are going to get with Jordanstown. We played them last year and they gave us another great battle.

“I think we showed what we didn’t last year. We proved there is a bit of character within the team.
“The NUIG game was the same – we knew what to expect. Damien Comer is a fantastic player and they are always going to do damage.

“Last year, we had two bad games at the weekend. We got past UL (University of Limerick), but St Mary’s played unbelievable and we played into their hands.
“This year, we wanted it a bit more and the hurt of last year was plaguing us and it got us over the line.”

Healy also hopes to benefit from playing alongside Dublin phenomenon, Con O’Callaghan while he also hailed the exploits of Monaghan sharpshooter Conor McCarthy, who was man-of-the-match in the Sigerson final after hitting 1-6.

“There is just no stopping Con at the minute,” said Healy.
“Conor McCarthy was brilliant for us this year as well. Against Jordanstown he hit two points at key times from outside the 45 with the outside of his boot.

“We had Con O’Callaghan back for the semi-final, which was obviously some boost. The standard you are training with is unreal.
“A lot of the work would be very skills based – it isn’t like the manager is trying to run the legs off you.

“If you aren’t fit enough, you aren’t going to play.
“It is brilliant to be training with those guys and it will hopefully bring me on.”

For Healy, it is back to the grind of Division Four football this weekend as Antrim seek to get their promotion bid back on track following a draw against Wicklow last time out.
While the general consensus was that Wicklow were the happier of the two teams after the game, Healy is hoping the result will prove to be a point gained, rather than one lost by the end of the league.

“I think getting a point doesn’t really change things for us that much,” said Healy.
“It just means there is no margin for error, we cannot afford to drop any more points.

“Hopefully, by the end of the campaign, it is a point gained rather than a point lost.
“Wicklow, credit to them, kicked some unbelievable scores. The point to level the game in the last minute from Rory Finn was a brilliant score. I wasn’t too far away from him so I knew it was going over.
“We probably should have held on when we went two points up, but hopefully we will learn from that.”

Healy also refuted the notion that Antrim’s failure to protect their lead in the closing stages of the Wicklow game was due to a lack of cuteness with the current squad.
“I know the Wicklow game doesn’t back it up, but there is a lot more character in the team this year,” added the St Enda’s clubman.

“We have held possession in games, especially against Waterford. Against Wicklow, what happened? I don’t know, but they had 13 men towards the end of the game.
“I don’t think it is a lack of character or bottle. I think we have plenty of that.

“We just have to learn to see out games. We won’t take anything for granted against London either.
“We will want to bounce back after the Wicklow performance and we are ready to give a good account of ourselves.
“Hopefully we can get over the line and set ourselves up for the Laois and Carlow games which will probably define the season.”