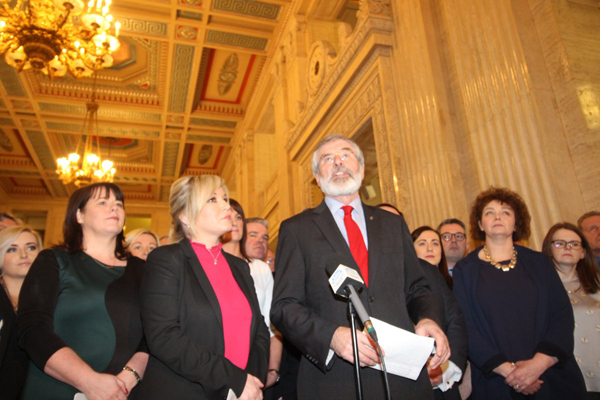 SINN Féin have accused James Brokenshire of talking “waffle” after a meeting with the Secretary of State.

Talks are being held at Stormont with parties in a bid to restore the power-sharing Executive.

Sinn Féin leader in the North, Michelle O’Neill, said Mr Brokenshire was avoiding the issue of financial assistance to deal with inquests into deaths during the Troubles.

“We need a fundamental change in approach from the British Government,” she said. “We made that very clear to James Brokenshire.

“All he did was waffle, waffle and more waffle in relation to how we are going to go forward and give families what they need.

“We called the meeting to an end because we had more waffle and asked him to go and reflect on that,” she added.

Sinn Féin President Gerry Adams TD has said if progress is to be made on legacy issues a major step change in the approach of the British government is required.

"In our meeting we asked James Brokenshire to immediately release the funds which the Lord Chief Justice has repeatedly requested so that victims and survivors – some of whom have been waiting more then 40 years – can have inquests into the deaths of their loved ones,” he said.

"He promised to come back to us on this issue. After a few minutes of today's meeting, however, it was clear that he had not done this.

"Sinn Féin saw no point in proceeding any further with the meeting and told him to come back when he had a positive contribution to make.

"If this process is to have any value then it has to be about implementation of agreements.

"If there is to be any progress we must have a fundamental change in the approach of the British government."

Meanwhile, DUP leader Arlene Foster met with her newly-elected MLAs and said she was “delighted” with their support.