Sofa so good as pioneering project brings community together 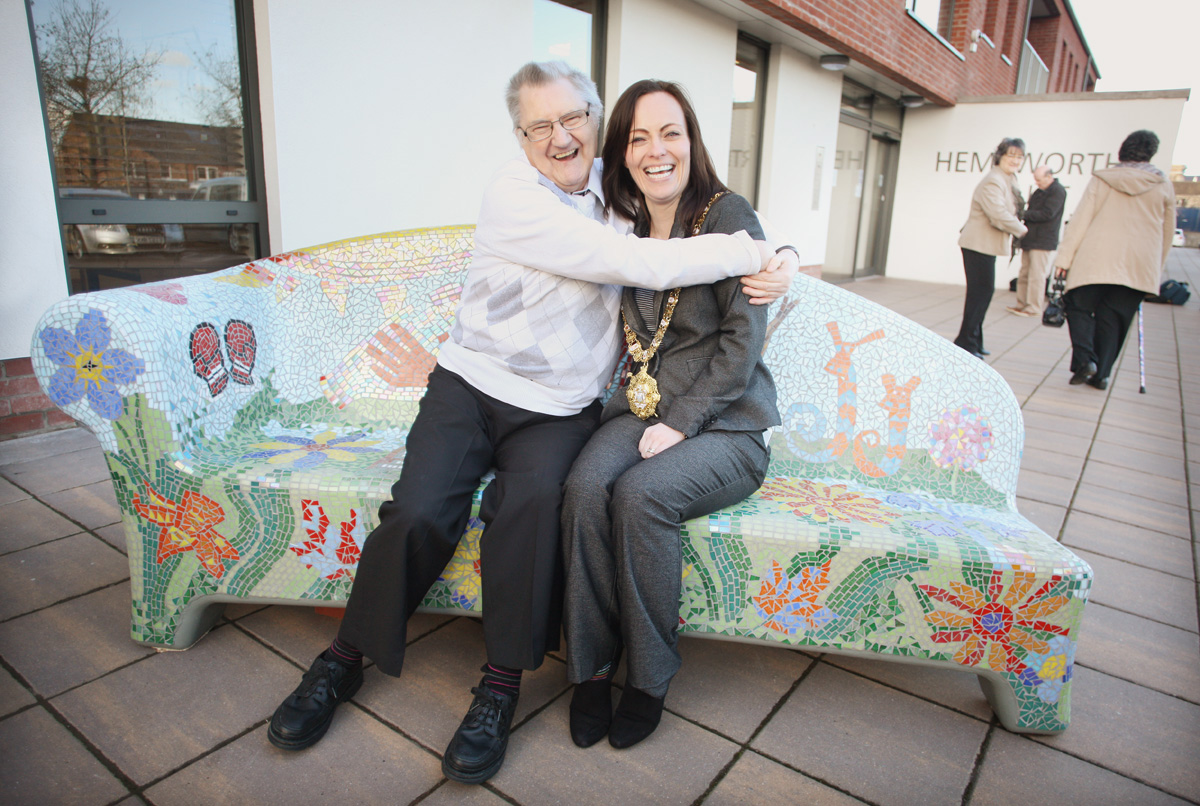 Warm memories are being shared on cold tiles in a ground-breaking project aimed at fostering community cohesion.
35 tenants of Hemsworth Court, a supported housing scheme in the Shankill area for people with dementia, have designed and constructed a 'Social Sofa that's set to bring all sections of the district together. At the launch this week, the guest of honour, Lord Mayor Councillor Nichola Mallon, paid tribute to all who had helped bring the scheme to fruition.
The first of its kind in Northern Ireland, the project is based on an idea picked up by Maria while visiting the Netherlands.
“A few years ago, a new initiative launched in Tilburg by comedian Karin Bruers addressed the need for natural meeting places in different neighbourhoods,” said Maria. “Cities like Tilburg seemed to have fallen prey to a kind of social coldness, so to solve this Karin started the project in 2006.”
The 'Social Sofa' scheme was designed to create meeting places where residents and visitors could catch up, converse and meet new friends.
“Initially, creating meeting places was the main reason for the introduction of Social Sofa, but the social aspect over time became increasingly rich and after the launch a community project was created,” said Maria.
Mervyn Bell from the Spectrum Centre secured funding for the Belfast Social Sofa initiative from the Art and Older People's Fund, administered by the Arts Council with support from The Baring Foundation.
Participants turned a plain concrete bench into an eyecatching and colourful focal point after a crash course in the use of mosaic tiles, adhesive and grout. 300 hours of labour went into the sofa, during which those involved extended the hand of friendship to groups from other parts of the city. Finally, and almost naturally, the design took on the theme of 'reminiscing'.
“The whole process has enabled tenants from Hemsworth Court to embark on a journey of reminiscence in the initial design stage and also during active participation with the local community and further afield,” explained Maria.
“Tenants, community groups, day centres, children from local primary schools and volunteers have expressed memories and feelings through the medium of art and learnt new technical, practical and creative design skills through the whole process of mosaic with the Social Sofa.”
Olivia Clarke, manager of Hemsworth Court, which opened in July 2013, said the project has been a great success in empowering tenants and helping break through social stereotypes of people living with dementia.
“The tenants have taken the lead role in the design and met different groups within the community, including day centres, senior citizen forum groups and Glenwood Primary School,” said Olivia. “It's so important for people who have dementia to be actively and meaningfully occupied. The project was a great way to let people know about us here. All of the tiles were agreed and negotiated and a lot of the memories were collected during that consultation period. It really is a social event and people get a lot of stimulation, chat and the opportunity to meet new friends and reach out to others.
“Empowerment, decision-making, being part of something and ownership are very often things that are taken away from people with a dementia as society's way of keeping them safe, but this project has worked brilliantly with our model of helping them make decisions and to keep them within the community for as long as possible, with a little bit of support.”