Soon to be Deputy Lord Mayor, Mary Ellen Campbell opens up about her political life and the fight against inequality as she prepares to become the city’s first openly gay holder of civic office 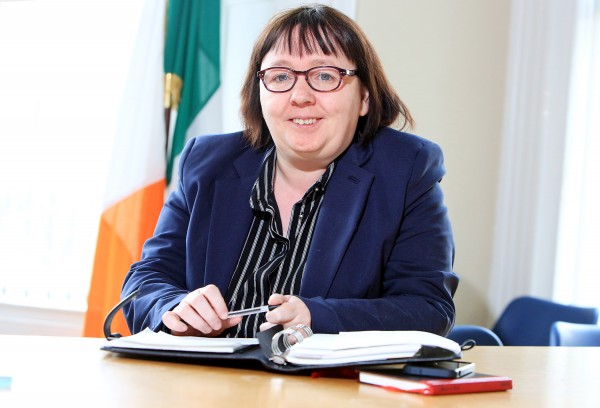 Despite only having served six years as an elected representative in Belfast City Council, Mary Ellen Campbell is no stranger to the sweeping hallways and grandeur of City Hall.

As a young child her father, who worked as a porter for the city, regularly would have had her six sisters and four bothers in his place of work.

Adopted when her birth mother passed away just a month before her fifth birthday, Mary Ellen says that she has a lot to be thankful for in the support shown to her by her large, close-knit family, made up of an extraordinary 64 nephews and nieces, 39 great nephews and nieces and even one great great niece.

It’s a source of great sadness to her that her dad passed away before he could see his daughter take her place as a councillor for the Castle ward in 2010. But the pride that he would known was felt many times over by her large family last week, when she announced to that she was to become Deputy Lord Mayor in June.

“Sometimes when I am walking around City Hall I can’t help thinking how proud he would have been and how much he would have loved what I am doing,” said Mary Ellen.

“He died in 2003 and he was an amazing guy. He would have always said that I would have been a good councillor and always had a project for me to help out others, whether it was a neighbour or a friend in the pub. I think my dad’s past is now an advantage for me because I see City Hall very much as a place of work, from the minute I arrived I knew it was a place to work and a place to deliver for constituents.”

Speaking openly in a rare in-depth interview about her life as a republican activist, and now an elected representative in North Belfast, Mary Ellen said that she would use her year in office to promote visibility around equality.
Her appointment also marks another important milestone for the city of Belfast, as she will become the city’s first ever openly gay holder of civic office.

She remembers attending the blanket and no-wash protests of the late 70s and early 80s and she says the hunger strikes were the biggest influence on her decision to get active.

She served four years in prison for possession of an incendiary device, being sentenced in 1991 when she was 23, and was one of the first people released under the re-introduction of the 50 per cent remission scheme.

“While being an ex-prisoner is an important part of my identity, it’s not an important part of my life,” she explained. “I think it influences me but it doesn’t define me. Jail taught me a form of discipline that comes to good use in my position as a councillor and as an activist. In those times I knew the choice was either death or jail, however since I have come out of jail I have worked very hard within the community, including meeting young people to get across the full reality of jail and end any romanticism associated with it. I would be heartbroken if any of my family or any of my young cumann had to face jail.

“I am not ashamed of what I have done or who I am. It is an important part of my character, of my identity. I am proud to be an ex-prisoner. However, I work hard for my community in other aspects and that’s what I think defines me now.”
No stranger to elections, Mary Ellen worked as a teenager on Joe Austin’s campaign, which finally saw him elected to the Oldpark ward in 1991. She admits that at that time she didn’t harbour ambitions to be an elected rep herself.

“I never thought I’d be a councillor, I never assumed that’s what I would do. I definitely didn’t assume that I would hold a civic office, it shows how much Belfast has changed,” she said.

“To be honest, in the first election I didn’t expect to get in but as Gerry Kelly has always said to me, ‘Hard work gets you elected,’ and while I might not be able to solve every issue that is brought to me, I always do my best.”

Mary Ellen was co-opted to replace Tierna Cunningham when she became pregnant in 2010, and in 2011 she was returned to Belfast City Council with Tierna, taking over 1,200 first preference votes.

She revels in constituency work and toiling behind the scenes for the people of the Castle ward. Publicity-shy, she admits uneasiness at the prospect of being thrust into the spotlight shone on the top civic offices of Lord Mayor and Deputy Lord Mayor, but she knows that the year-long term is a fantastic opportunity for her as a gay person to further her fight against inequality.

“Part of me thinks that in 2016 it’s mad that we are talking about this as a first,” she added. “The reaction has been 99.8 per cent positive but there have been a few negative comments. Unfortunately, in 2016 there are still some who tell us that we need to be invisible. Inequalities for the LGBTQ community have led to mental and emotional health problems, that’s why it’s important to be visible, that’s why I am using this year to increase that.”

Last year Mary Ellen picked up the Belfast Pride award for ‘Political Contribution to the LGBTQ Community’ at an awards ceremony in the City Hall, while also receiving a commendation for intervening in a verbal racist assault she witnessed on a North Belfast bus, which led to her receiving several blows to the head.
“I hate sectarianism, homophobia and racism. It’s something I have always challenged, until it stops it is something I will always challenge,” she said.

“Bringing Belfast forward as a 21st century city is for the benefit of all citizens so that Belfast becomes a visibly welcoming city attractive to major companies, investors and visitors. A city of equality promotes tourism, boosting the economy and reducing unemployment.

“When I talk about a city of equals, I really mean it. I don’t do rhetoric. I see my role as ensuring my constituents should have equal access to services.

“I think my constituents know, regardless of who they are, I’ll fight for them. I see that as the definition of the activist that I am.”