Sorrow and pride as local Fians are remembered 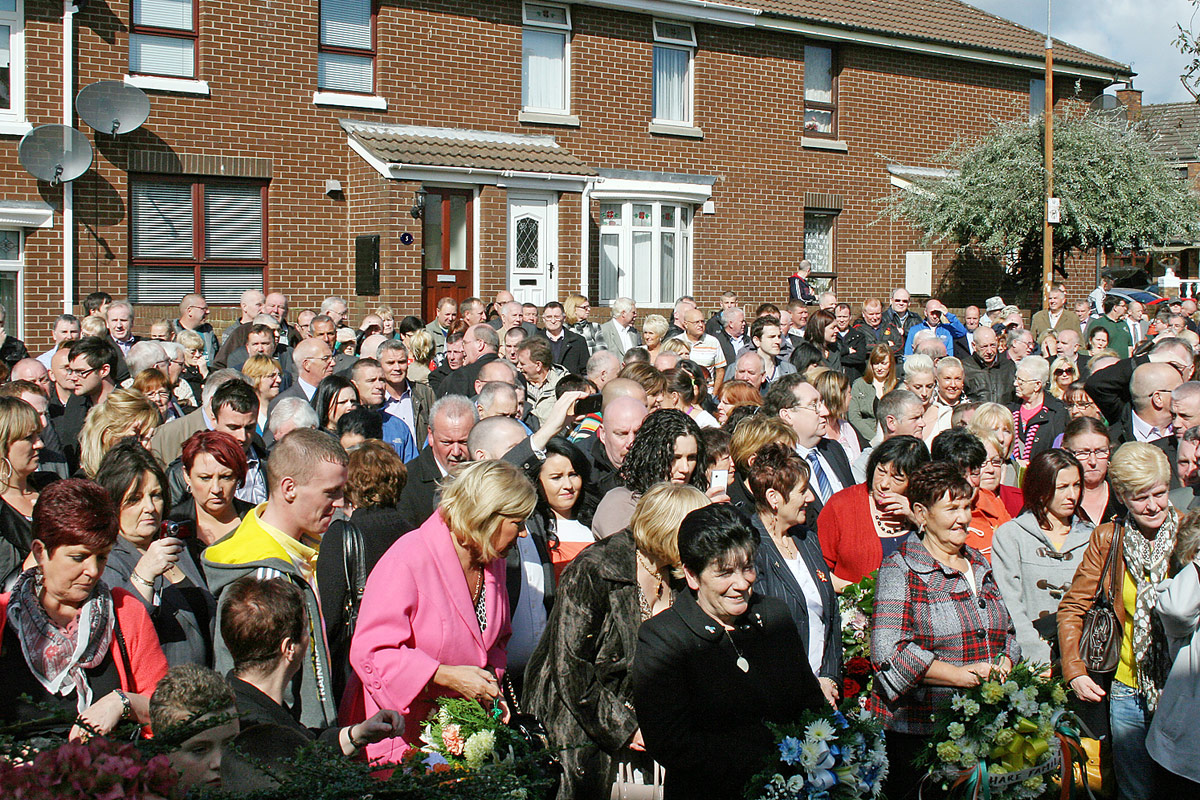 FRIENDS, family and former members of Na Fianna Éireann gathered in the Lower Falls for the unveiling of a plaque dedicated to the memory of teenage volunteers Rose Curry and Gerard O’Hare, who died in a premature explosion in the lower Falls in September 1971.

Rose’s brother Seán addressed the large crowd at Gibson Street on Sunday. It was a day “filled with a mixture of sadness and pride”, he said.

“Welcome friends, comrades, and especially former members of Fianna Éireann. We are gathered here to honour the memory of two brave Fians, Rose and Gerard, and in remembering them we remember all our comrades who lost their lives in the struggle and we thank members of their families who are here with us today. This is a magnificent turn-out and I thank each and every one of you on behalf of our two famiies for giving your time to attend this unveiling. This is a day for me to remember the loss of a sister and a friend. Gerard and Rose were in no means fanatical about their politics; they, like ourselves, regarded it as their duty. The only thing I remember Gerard being fanatical about was fishing was his Da, big Jimmy, and I can still picture Rose, or ‘Malteser Eyes’, as my Da used to call her, and her love of music and chasing boys. 40 years is a lifetime away and thankfully such sacrifices are no longer necessary, we are free to pursue our goals by peaceful means – our political arguments and principles are the only weapons we need today. We stand today a world away from those dark days, when every day was a struggle to defend ourselves and our community from the excesses of the British army and the RUC. Gerard and Rose were involved in these actions while defending the Falls area, the heartland of Belfast republicanism, when they died tragically near this spot. It could’ve been any of us.

“The motto of Na Fianna is ‘Strength in Their Arms, Truth on Their Lips and Purity in Their Hearts’ – Rose and Gerard lived and died for those principles, and it is great to see so many of their comrades come to pay their respects. Looking back on their ages [Gerard was 17 and Rose was 18] – it seems extremely young to be involved in such actions, but we must remember that the average age of a combatant at that time was probably 19 or 20. It is just we got older and they didn’t. Rose and Gerard came from two strong republican families, they were struggling like so many of us for the right of the Irish people to self-determination and a republic outlined by Wolfe Tone and James Connolly – few here would disagree with those aims. So let us in their names begin to highlight our commonalities and not our differences. In the intervening years many of us have chosen different political paths, but on reflection many of those differences were greatly exaggerated and we demonised friends and neighbours for abstract sectarian political slogans. Friendships are more important than political differences, and it is an ever-decreasing minority among us who perpetuate political sectarianism. We are probably politically closer today than we have been since those days.

“So as well as involving ourselves in essential cross-community peace-building, is it not time to begin intercommunity dialogue to heal the old wounds? There is a new political landscape out there and we should all look to the future.” and not the past.”