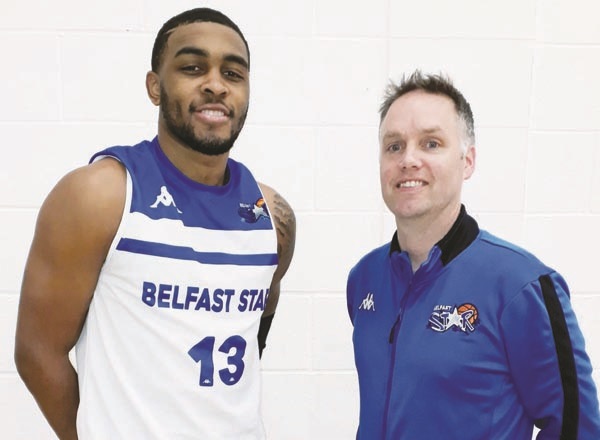 WITH the Basketball Ireland Men’s Super League title already safely stored in the trophy cabinet, Belfast Star was celebrating further over the weekend with a clean sweep of the end-of-season awards.

Adrian Fulton was named Coach of the Year, with Delaney Blaylock picking up the Player of the Year accolade. Fulton’s son, CJ enjoyed a personal clean sweep as he scooped the Young Player of the Year for the second season running, as-well-as U19 and U18 Player of the Year awards, while he and Blaylock were also named on the All Star team. These personal accolades capped a quite magnificent campaign for all at the club that celebrated the national title last month, albeit in strange circumstances.

With one round of games still to play, Covid-19 forced the league’s hand in declaring the season over with Star and Tralee Warriors neck-and-neck at the top, but the Kerry team were found to have committed an unintentional rule violation towards the end of the playing season, resulting in Star being declared outright winners. Their exploits on the court resulted in Thursday’s announcement that Coach Fulton, his son CJ and American, Blaylock, were all rewarded for their stunning performances throughout the season.

“We’re obviously very pleased, but it’s been a weird month since the season finished - not getting to celebrate it the way we’d have liked,” said the Star head coach.

“There are bigger things going on at the minute but it was nice to get that.

Club Chairman Bill McCotter was delighted with the news.

“I have to say that while this is a terrific honour for the club as a whole, it’s also richly deserved recognition for these three individuals,” he said.

“Delaney has been outstanding – athletic, powerful and a great guy into the bargain. And when you consider that he was out injured for several weeks before Christmas, it just shows you what an impact he has had on the league to get player of the year. Then there’s the Fultons. What more can you say about them?

"CJ is such an unassuming young man but with an incredible talent. He has really marshalled the team brilliantly from point guard this season. And I’m so happy for Adrian too – not just the fact that he delivered our first title in 20 years, but the way he did it. He built a terrific spirit among the players from pre-season right through. And people the length of the country have remarked on the style of play he has delivered, gutsy when needed but always with the flair he himself had as an Irish international."

The awards are due to be handed out at a ceremony in Croke Park at the end of May, but like everything at present, that may have to be rescheduled.

Either way, the Belfast club can reflect on an impressive campaign when they pushed on from the previous season when huge strides were made to bring them back into contention for the major honours.

“We made great progress last year and then ran out of gas even though we had a good enough finish to the season getting to the Champions Trophy final, so it was great to sustain that,” Fulton agreed.

“We knew by Christmas that we had very little room for error so we were able to kick-on and won some really big games on the road and at home. We were able to dig out a couple of big road wins and the game against UCD stands out as it’s always tough to win down there.

“The run that started with beating Killorglin at home, UCD away and then (DBC) Eanna at home - three of the top teams - that stretch left us in really good shape.”

Saturday night games at La Salle attracted large crowds that were up on the previous season with Star’s push for the title drawing a growing interest as the weeks passed. It wasn’t just the results, but the manner in which they were achieved that pleased Fulton who felt their style of play helped inject a buzz around the team.

“We definitely played a style of basketball that brought the crowds back,” he continued.

“Last year the crowds were good, but they were even better this year and people enjoyed watching us play, which is as important as anything. When you’re getting people wanting to come and watch you play then leave entertained, that was our primary focus in how our team was set up.

“We’ve a very talented and exciting group of young players and an American (Blaylock) who is an incredible athlete, so it was just a great season all round. It’s a shame how it finished but we were obviously very pleased.

“We’ve a lot of young players who came through our programme at St Malachy’s and through Star, so it’s very rewarding for all of the coaches who’ve worked with those players coming through to see them come out on top.”

The Irish Super League usually gets underway in September, so the hope is that things may have returned to some form of normality by then, but it is simply impossible to tell as to what measures surrounding the Covid-19 pandemic will be enforced then.

Fulton is hopeful that basketball can return at some point but is fully aware that there could be added pressures on the League and clubs due to the current lockdown and expected economic repercussions.

“There will obviously be discussions behind the scenes and people are talking as to what is going to happen or what format it will all take: could it be October or November when it starts? You just don’t know,” he accepts.

“There’s so much uncertainty out there, but you have to have a bit of hope were going to come out the other end of it, whether you’re involved in basketball or not.

“All sports will find problems at the end of this and one of the first will be sponsorship. That might affect what pro’s you can bring in so at the minute they’re looking to see what measures they will have to put in place to get things going next season.”