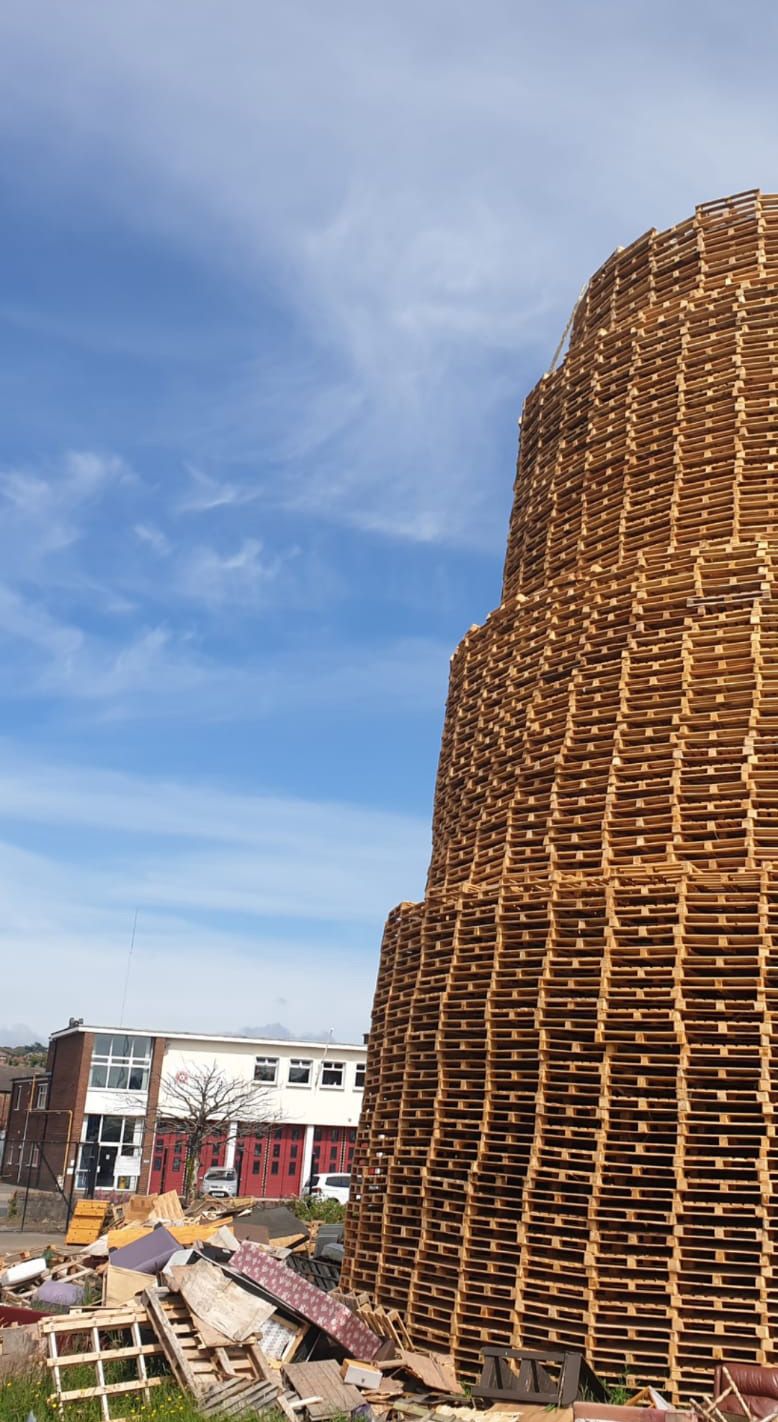 MILES AWAY: As this photograph confirms, the bonfire is quite a distance from the fire station

An open letter from Newtownards

We have been disappointed in recent days and weeks to see the increasingly hostile press coverage of our bonfire on the Portaferry Road. For the sake of community cohesion, and to correct some of the frankly mischievous and downright inaccurate reporting, we would appreciate space in your publication to outline the facts of the case.

Firstly, while it is true that the bonfire is a tall one, it is only 90 feet higher than the recommended safe height, and not 100 feet, as has been widely claimed.

Further, allegations that the pallets on the bonfire have been stolen are an insult to loyalism and a disservice to the engineers who have worked so long and hard to construct this modern marvel. The majority of the pallets were voluntarily donated by local businesses after being approached by our Bonfire Sourcing Officers, Top Gun and Pliers. Other pallets were generously handed over by the Ards Peninsula Pallet Bank, an organisation set up last year to alleviate high levels of pallet poverty, mattress misery, sofa scarcity and tyre trauma in the greater Newtownards area.

Next we turn to claims that there is a fire station next to the bonfire. For the avoidance of doubt, this is a flat-out lie. From the doors of the fire station to the foot of the bonfire is at least 100 yards. Our survey of the structure calculates that if the bonfire were to collapse in the direction of the fire station, the burning material would fall at least ten feet short of the building, posing little or no risk to life or property. And in any case, the Northern Ireland Fire and Rescue Service have said they will be covering the front of the station with NASA-standard heat shields.

We have written to the Fire and Rescue Service demanding to know who made the ludicrous decision to build a fire station next to a cultural celebration, but we are yet to receive a reply.

To those who have expressed concern about a fire station having to be protected from a fire, we would point out that should Newtownards fire engines be needed on the night anywhere in the Ards Peninsula area, it will be perfectly safe for them to exit the building as long as they drive along the footpath, otherwise paint-bubbling may occur.

We also recommend that fire engines take a left towards Portaferry on exiting the building to avoid the bonfire side of the road. Should they need to head in the direction of the town centre they should do a looper round the back of the station. We have sent Newtownards fire station’s blue commander a helpful list of top safety tips which we recommend he observes on the night. We have also informed him that we are available to provide advice and help on any aspect of fire safety on the night.

There has been much deeply unhelpful speculation about what is inside the bonfire. While we are not at liberty to divulge what’s in there for commercial and privacy reasons, we would point out that we are on track to meet our Tyre/Mattress/Sofa-Free deadline by summer 2040. In the meantime, the usual advice to bonfire-goers to breathe only when absolutely necessary remains in place. Finally, the Newtownards bonfire this year has been kindly sponsored by Acme Inhalers Ltd, Ulster Oxygen Supplies and Apex Heat Shields.

Welcome to North Down

Another NHS Cross to bear

SO the NHS has received the George Cross from the old Nellie Deane. There’s no doubt been much rejoicing in the nursing stations of the Royal Victoria Hospital and the porter room of the City Hospital at this latest act of munificence by the British establishment.

The important job of paying back our frontline health staff for the magnificent and selfless job they’ve done over the course of the pandemic began in the early spring of 2020 when the first Clap for Carers was held. Out we came to applaud, blow whistles, bang pots and rattle pans with wooden spoons. And how the staff in their binliner aprons and home-made masks were lifted by this show of appreciation. And how their hopes of a long-awaited pay rise rose when Prime Minister Boris Johnson came to his door to clap, breaking his own rule of never doing gestures (stop giggling at the back). Surely now that the entire country was united behind our NHS heroes they would get the monetary thanks their sacrifices demanded. And sure enough, in March that same year Health Secretary Matt Hancock wiped the lipstick from his bake to emerge from his office and announced that NHS workers were indeed to receive a pay rise – of one per cent. For context, the average pay of a porter is £10 per hour, so that meant a rise of 1p per hour, or 8p per day.

And now this. NHS staff – who have hardly recovered from the hangovers brought about by celebrating the bump in their salary – are now holders of the George Cross. Squinter’s not sure if ATMs accept the George Cross, or whether PayPal is happy to take a Clap for Carers, but who cares? It’s the thought that counts. By the way, it’s a little-known fact that George Cross medals are struck from the engine block of the actual car that Dominic Cummings drove to Barnard Castle in. Or that holders of the George Cross are entitled to drive their sheep through Jeffrey Donaldson’s front garden.

And who better to present the George Cross to the NHS than the queen, who has for years been an unswerving supporter of the NHS? Except, that is, for all those years after 2004, when her estate first invested in an offshore tax haven. Some people may think it that a little awkward since the NHS is paid for by, ah, tax. But Squinter’s sure the porters are completely relaxed about it and delighted with their clap, their Cross and their 8p a day.