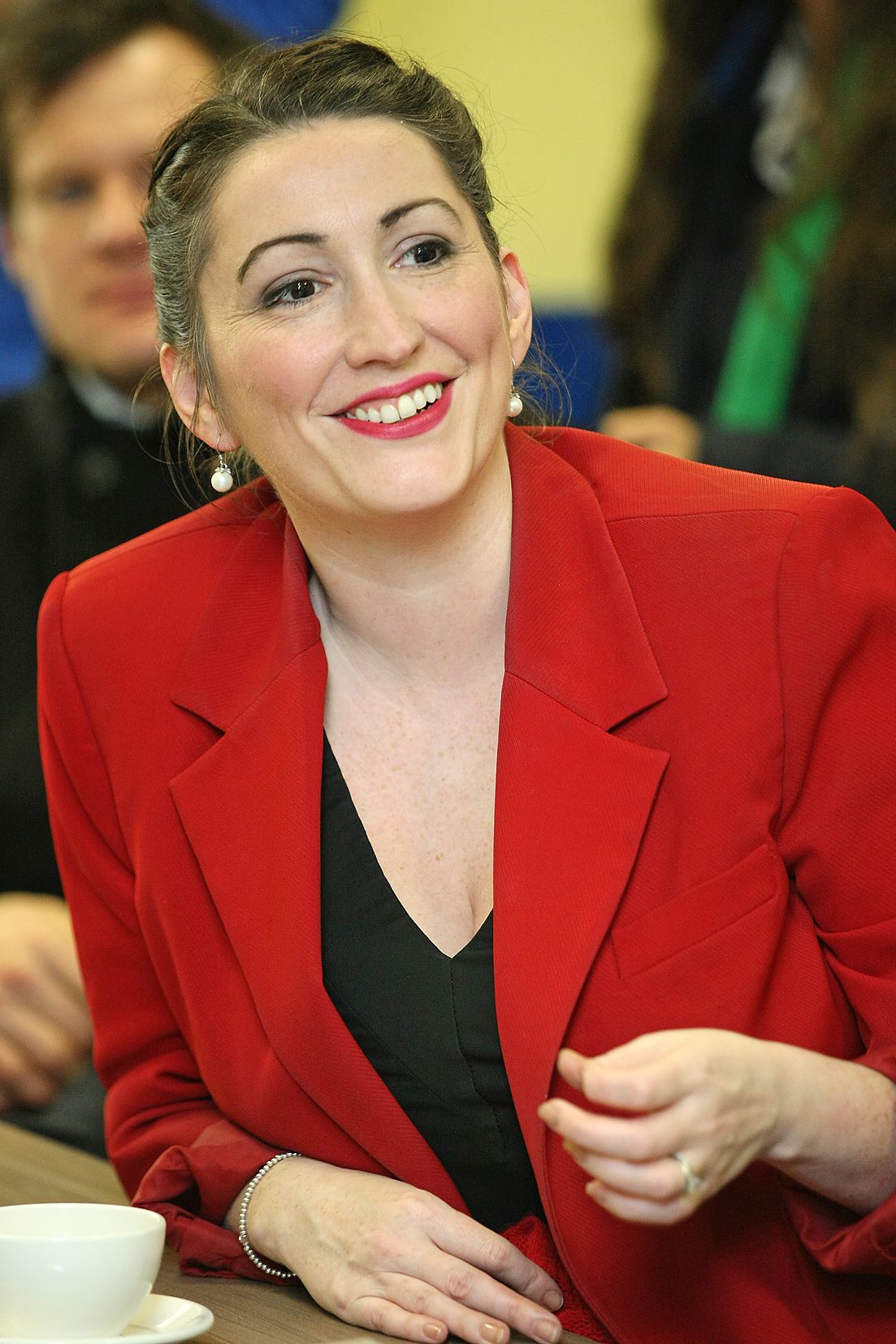 EMMA Little-Pengelly believes that people who identify as British are currently being treated like “dirt”. In an impassioned tweet in the wake of a fire at an Orange Hall in Tyrone she wrote: “Those who demonise the culture, traditions, heritage and identity of the British here have to understand the consequence of what they're doing. It must stop. We will not be treated like dirt – abused, attacked and, on issues that matter to us, ignored. Enough is Enough. #Disgrace.”

Emma’s boiler had been stoked by an equally impassioned tweet by her party leader, Jeffrey Donaldson, on the same subject, and it was that to which Emma was replying when she made her “treated like dirt” claim.

“Another burning Orange Hall,” wrote Jeff, “youths chanting pro-IRA songs, thugs desecrating memorials to victims. Some republicans seem intent on crushing the unionist spirit. We will not respond to this provocation with violence. We will respond with a solid determination to stand our ground.”

Kind of a 21st century ‘No surrender!’ cry, you might say.

In this era of late-stage unionism, with the conversation around a new Ireland gathering pace and the clamour for a border poll growing louder by the day, the reaction of unionism to rapid change has been a fairly standard one, witnessed across the years and across the world whenever and wherever political dominance is being overturned, as Squinter pointed out online: “Treated like 'dirt', Emma? Interesting. Overwrought post-colonial hyperventilating is a historically typical reaction of the formerly dominant. There's a lot of literature on experiential inversion as a symptom of power loss.”

The democratisation of power never arrives without a fuss and a key weapon in the arsenal of those losing control is to create a bogus cloak of victimhood – to claim to be experiencing the same discrimination that sparked the heave to change the status quo. Not that Emma agreed.

“Ah, nothing like some dull, stereotypical pop psychology that reveals much more about you than about your intended targets,” she tweeted. “What about deciding to speak up in solidarity to those who have suffered this sectarian attack on their culture rights instead? We'll wait...” For some reason she added an emoji of a bloke wearing a monocle at the end.”

Dictionary.com defines ‘pop psychology’ as “Psychological or pseudopsychological counselling, interpretations, concepts, terminology, etc., often simplistic or superficial, popularised by certain personalities, magazine articles, television shows, advice columns, or the like, that influence the general public.” Now Squinter has seen The One Show covering dogs that make human noises and vegetables that look like bodily parts, but he doesn’t remember them getting Ant and Dec on to analyse the dynamics of post-colonial power shifts. And while there are many excellent articles in Take a Break on sisters stealing their sisters’ husbands and holiday apartments from hell, the magazine is not renowned for its laser focus on experiential inversion as a symptom of atrophying hegemony. These things can, however, be read about online should the notion ever take hold, although be aware that academic papers can often cost a few quid to access.
Rounding off the exchange, Squinter tweeted: “Emma, some day – and today is not that day – we will discuss the difference between political science/peer-reviewed academic works and, ah, pop psychology.”

And that was that. Squinter went back to telling jokes about people farting in black taxis and Emma went back to being an elected representative for South Belfast. Sorry, unelected. And sorry, Lagan Valley.

ENEMY AT THE QUEEN’S GATE: A SAD TALE OF LOYALIST LOSS

THE creation of imaginary enemies to engineer a sense of crisis and siege is a tactic the right has used since Genghis Khan put the first of his 40 million victims to the sword.

The idea of political correctness has become so banal and clichéd that it has latterly been replaced by the concept of woke, which is a deliberately vague concept used by the usual nasty nutcases to mean anyone or anything they want it to, but which can be boiled down to mean anybody who cares about anything or anybody other than themselves.
*See also virtue signallers.

Migrants, of course, are Enemy Number One, always have been, with the crosshairs being painted on the back of whatever target suits at any given time. During the long lie that was the EU referendum campaign it was Turkey and the Turks, with the public’s already fevered imagination being furthered inflamed with horrific and entirely bogus claims of an invasion of Turks after that country’s imminent accession to the EU. Today it’s Albanians because somebody has figured out that while scapegoating asylum seekers fleeing from conflict-torn lands such as Iraq, Syria and Afghanistan is easy-peasy, there remains a stubborn cohort of people who steadfastly refuse to see such people as anything other than victims. And so while Albanians are a relatively tiny percentage of those crossing the channel in supermarket inflatables, they’re not fleeing because they’re afraid of being blown up or shot. Oh, and they look a bit like Romanians, who, as every Daily Mail reader has known for years, are cutthroats, pickpockets and beggars who want to move in next door and kill your family.

Our local rightists are similarly intent on presenting to their supporters as enemies people and organisations who are anything but. Alliance, for instance. An alien living undercover in Belfast for the past ten years might be forgiven for thinking that Naomi Long and her colleagues are a bigger threat to the union than Gerry Adams, the Wolfe Tones and the Protocol put together. More recently, however, Naomi has been replaced in the anti-affections of Billy Boy Big Balls by a mild-mannered law academic from Queen’s by the name of Colin Harvey. Colin’s sin against loyal Ulster is first of all being in favour of a united Ireland, and secondly and more importantly, not shutting up about it. The extent of the opprobrium and bile directed at him in both mainstream and social media is quite extraordinary, driven to a large degree by the fact that as an employee of Queen’s he’s a symbol of the changing face of Belfast and of the North. The university was once one of the blue-chip institutions identified by equal rights campaigners as not so much a cold house for Catholics, more an Arctic ice palace. It was also a conveyor belt for unionist politicians and of course back when the university was inviting the RUC band to play God Save the Queen at graduations there was nothing wrong with legal academics declaring for the union – in fact it was positively encouraged. But these days, when it seems O’Neill’s half-zips are the unofficial uniform of the student body and flags and anthems are a distant memory, suddenly professors Bolshie enough to express a political opinion should be stripped of their stipends and stripes.

More recently, a rather worthy small group which is doing its bit to improve accountability in public life has started to appreciate how it might feel to be Professor Harvey. Fact Check NI (FCNI) has called out the DUP over some rather obvious whoppers it has been telling about how much the Protocol is costing us. Ian Paisley claimed that the Protocol is adding an eye-watering 27 per cent “additional costs to everything in Northern Ireland”. FCNI disproved that one by consulting the well-known economic reference book ‘What In God’s Name Are You On About, Man?’ A similar if rather less bonkers claim by Jeffrey Donaldson was also slipped into the drawer marked ‘Bollocks’, as were scaremongering fairy tales by other DUP politicians.

Just as Queen’s turning out unionists is fine but turning out united Irelanders is seditious, so FCNI fact-checking others is fine, but fact-checking the DUP is a declaration of war. Cue we-know-where-you-live comments on the membership of FCNI as the usual suspects took a well-deserved break from ganging up on Colin Harvey to gang up on the real enemy: facts.