SQUINTER: If the cap fits, wear another one 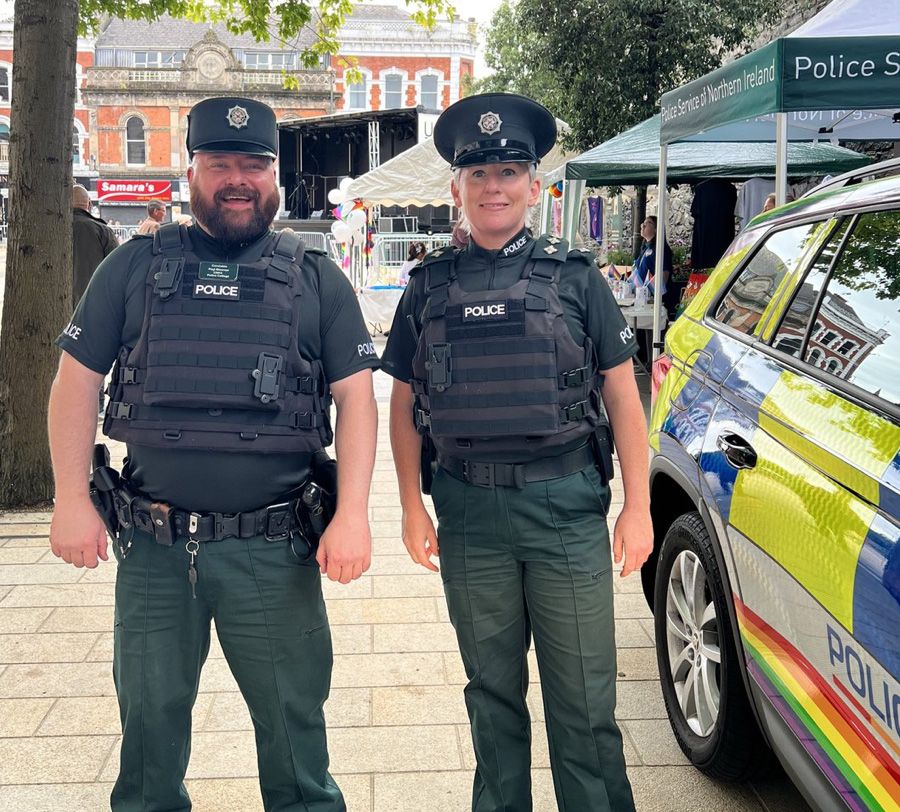 IF YOU WANNA GET AHEAD: Police officers have a choice on headwear

AS an unrepentant Fenian Squinter has always found it odd being lectured on morality over the years by members of the DUP who are “pretty repulsed” by gay people or believe them “worse than paedophiles” and “poofs”. Similarly, when DUP members enter the arena of intellectual debate, it’s odd being expected to take seriously people who believe that the Earth is the same age as David Attenborough and Noah’s Ark is historic and scientific fact.

And in recent weeks as the party hysterically denounced Michelle O’Neill he’s found himself wondering 1) whether there was any alternative to the DUP donning red berets and forming a paramilitary force which went on to import industrial amounts of illegal weaponry which are still sloshing around and 2) whether any of our esteemed broadcasters will ever ask the DUP that question.

More oddities have been emerging by the day in recent times. Squinter had thought the oddest one was a column in the Belfast Telegraph shrilly denouncing kids in the park singing about the Ra… written by a former National Secretary of the cuddly dissident group Republican Network for Unity. But that was triumphantly outdone in the oddity stakes by the entertainingly excitable DUP MLA for Upper Bann, Jonathan Buckley, who’s been filling the time that he and his party are spending boycotting Stormont by passing wind loudly and aromatically on Twitter. A couple of Jonathan’s more fragrant contributions in particular have had Squinter pondering whether young Jonathan mightn’t have a little too much time on his hands.

I’m sure you all feel great🙄 Everyone can stand around and clap each other on the back in the, ‘politically correct brigade’. How about getting on with the real issues affecting people such as tackling drugs, theft and crime? https://t.co/ugXmNHuDN8

In a nod to Foyle Pride at the weekend, the PSNI announced that officers with non-binary identities would be allowed to choose which hat they want to wear. Jonny wasn’t having it. He wasn’t having it at all. He tweeted in response to the police: “I’m sure you all feel great. Everyone can stand around and clap themselves on the back in the ‘politically correct brigade’. How about getting on with the real issues affecting people such as tackling drugs, theft and crime?”

Call Squinter old-fashioned if you like. But if he had decided not to go to work like Jonny and his chums have, if he had woken up one morning and begun claiming his wages while not going to the office, he’d be a tad reluctant to urge others to do their jobs. That contribution shoots to the top of the ‘Neck Like a Rhino’s Scrotum’ list ahead of Education Minister Michelle McIlveen, who has warned teachers that their pay may be cut if they go on strike for a day while she continues to claim her full pay for being on strike. For four months.

But that wasn’t Jonny’s most remarkable contribution to the social media discourse in the past few days. That came after Sinn Féin South Down MP Chris Hazzard tweeted about a book that he had read and enjoyed. The book – ‘People’s War, People’s Army’ – was written by Võ Nguyên Giáp, a Vietnamese politician and general widely considered one of the greatest military tacticians of the 20th century. He’s widely studied in military academies and political circles and is known as ‘the Red Napoleon’ for his exploits in tackling and expelling three military behemoths from his country: Japan, France and the United States. Chris described the book as “a political and military masterclass in anti-colonial struggle”, adding nine years after Giáp’s death, “A good read today on his birthday.”

If this is a recommendation from a Member of Parliament for tactics to use against our security forces, then it is deeply worrying. Immediate clarification required. I have written to the Parliamentary Standards commissioner. https://t.co/i4TLnzs0IV

After a hard morning and early afternoon of the News Letter crossword, a spot of light gardening and and Bargain Hunt, Jonny took to Twitter and was appalled by what he read. Lips thin with rage, his thumbs flew across the keyboard: “If this a recommendation from a Member of Parliament for tactics to use against our security forces, then it is deeply worrying. Immediate clarification required. I have written to the Parliament Standards commissioner.”

Squinter can’t be sure, so he’s only guessing when he says this may be the first time the Commons standards guru has received a complaint about an MP reading a book. Lying? Yes. Cheating? Yes. Misleading? Yes. Corruption? Yes. But going to a library or a bookshop?

So here’s a challenge for Jonny. For a relatively young politician to whom Squinter is probably giving 30-plus years, you look like the kind of tightly buttoned-up guy of whom Homer Simpson once remarked: “The poker up his ass has a poker up its ass.” So you probably don’t gamble. Squinter does. He loves a bet – and here’s one if you care to make an exception on punting. If anything comes of your complaint to the standards commissioner, Squinter will shave his head and pose for a picture bald beneath Carson’s statue. And if Chris is indeed hauled over the coals for, ah, reading history books, all you have to do is tweet: “Oops, Jonny made a boo-boo.”

We're here @FoylePrideFest dancing the Macarena to engage with the public and to show some support for our colleagues in @LincsPolice. Happy Pride everyone celebrating this weekend. #PoliceWithPride pic.twitter.com/Dg78w3mbwf

There’s clearly an attempt being made to create an alternative universe wherein the Ra remains the pre-eminent threat to peace and security in Our Wee Country even though they haven’t lifted a hand in over 20 years – 20 years in which loyalist paramilitaries have tightened their murderous grip on the throat of their own community. We saw last week how 70 per cent of nationalists who expressed an opinion that 50 years ago republican violence was inevitable given the prevailing circumstances were branded ghouls and terror apologists. Now we’ve got a geezer who thinks that by recommending a book about political and military history a Sinn Féin MP is on the brink of declaring war – unless he puts his hands up, steps forward and makes it clear he isn’t.

And you don’t need to read a history book to understand where that particular road leads to.

Conor really gets it

“I’M still Conor, I’m still the wee fella from the Antrim Road.”
Thus spake Conor Burns – Tory Minister of State for Northern Ireland – during an interview with Freya McClements of the Irish Times which was as hard-hitting as a water balloon hitting a walrus.

Now much as Squinter admires Conor’s dizzying rise to the middle-rung of a Conservative Party about to be led by the towering intellect that is Liz Truss, he’s not sure that the Honourable Member for Bournemouth West has attained the heights of global fame that Jennifer Lopez reached when she thrilled the world with the timeless classic ‘I’m Still Jenny From the Block’. But if Conor thinks that being an NIO apparatchik entitles a man to go all J-Lo about his achievements, then good luck to him. And god bless his chutzpah.

As Conor and Freya continued their interview, conducted during a stroll around the Waterworks accompanied by a photographer with a brief to capture the subject in a series of interesting and windswept moods and poses, Boris Johnson’s most pantingly loyal acolyte opened up more about his deep spiritual connection with the people of the New Lodge. And he laid out the innate understanding that he developed of the serpentine political and historical intricacies of the north during the many, many years he spent as a boy in the Bandit Country of North Belfast from birth to Primary 3:

“I have an emotional, instinctive understanding of this place because I’m from here. I lived it, I’ve breathed it, my family are here.”

Squinter grew up in a very similar urban, working class environment three miles across the city. But he has to say that when he was in P3 he hadn’t ‘lived’ Belfast. The only things he’d lived were rap-the-doors-and-run-away, egg-and-milk chews and Scooby-Doo. But if Conor thinks that living in the New Lodge until he made his First Communion confers on him as a man of a certain age a Solomon-like understanding of Belfast then the only response can be, Fair play, big man – they must have put some special stuff in your Dairylea Triangles that those of us who’ve spent our lives here were denied.

But while the hilarious hubris of “I’m still Conor, I’m still the wee boy from the Antrim Road” will loom large in Ireland when it’s time for posterity to carve Conor’s epitaph, it will feature some way below his most famous contribution to the political and social discourse. That came when he told Channel 4’s Cathy Newman that Boris ‘Pump Up the Jam’ Johnson had not attended a birthday party at 10 Downing Street, but had been “ambushed by a cake”.

Up to that point, Squinter’s favourite Tory quote in the Tory Austerity Banter Years was the now disgraced, money-grubbing Owen Paterson, who, on being asked why a cull target in his Environment Department hadn’t been reached, replied: “The badgers moved the goalposts.” Owen, of course, was another Tory C-lister sent to loyal Ulster to keep him away from the scissors.

If Conor’s handed this article as part of his press team’s daily media brief, Squinter can only hope that he takes it in the right spirit. After all, if he’s still a wee boy from the Antrim Road, Squinter’s still an oul’ lad from the Lower Whack. And that’s a bond worth treasuring.