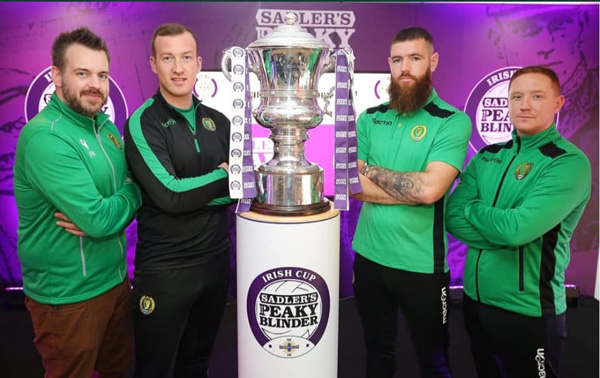 Belfast Celtic manager Stephen McAlorum, picured above (far right) at the fifth round draw, knows his side face a huge challenge this Saturday as they take on Irish Premiership side Larne at Inver Park for a place in the sixth round

CRUMLIN Star will look to pull off another shock result in the fifth round of the Irish Cup when they take on Ballymena United at the Showgrounds.

Last season, they claimed the scalp of Championship 1 outfit Loughgall with a brilliant 4-1 fifth round win at Lakeview Park before losing out to Larne 3-1 in the sixth round.

The North Belfast men are no strangers to the fifth round and have reached this stage of the competition four times in the last five seasons.
Indeed, they lost out to Ballymena in the fifth round back in 2015 when goals from Matthew Tipton, Darren Boyce (two) and Gary McCutcheon saw the Sky Blues claimed a 4-0 home victory.

Now under the management of David Jeffrey, a seven-time winner of the Irish Cup with Linfield, Ballymena will be strongly fancied to progress.

Yet, Crumlin Star manager Paul Trainor insists his side were hoping to draw top-flight opposition.

“We were one of the last teams out, I think the fourth last draw, and the Glens, the Blues (Linfield) and the Reds (Cliftonville) were already out,” stated Trainor.

“I’d have loved one of those teams, but by that stage we were hoping for Crusaders or Ballymena.

“Failing that, a home draw against a team from our own level would have been nice.

“Crumlin Star played Ballymena at this stage back in 2015 and it was a great occasion so it is something we are looking forward to.

“David Jeffrey is over them, but they just haven’t been playing as well as they have been last season.

“Hopefully, we’ll bring a good crowd with us and there’ll be a great atmosphere at the Showgrounds.”

On what proved to be a day of Irish Cup upsets last season, Crumlin Star turned in one of their best performances of the season against Loughgall to defeat the Armagh side 4-1 with skipper Barry McKervey leading by example with two goals in a man-of-the-match display.

Star then went on to lose out to the-then Championship 1 leaders Larne in the sixth round and Trainor feels this Saturday’s clash with Ballymena is a huge step up in class from last year’s fifth round tie.

“No disrespect to Loughgall, but this is a different test. Ballymena are a top five, top six team in the Irish Premiership,” said Trainor.
“With David Jeffrey looking after them, it is going to be a big ask.

“David is one of the most successful football managers in the country.

“We’ll go out with a plan and we’ll be as professional as we can and we’ll enjoy the day. That said, I like more than just enjoying the day – I like winning too!

“It is a massive ask, but we’ve always punched above our weight and we’ll give it another go. The players will enjoy it, we’ll work hard we will see where it takes us.

“I noticed at training after the draw was made, there was a real buzz about training and we’ll forward to the fifth round.”

Larne v Belfast Celtic (Saturday, 3pm, Inver Park)
BEATING Irish League opposition in the form of Larne was always going to be tough, but Belfast Celtic take in their first game of 2020 without the services of Matthew Fitzpatrick, who has switched to Coleraine.

The former Antrim GAA star has been a revelation for the West Belfast side this season since resuming his soccer career.

His impressive performances helped The Hoops reach the last four of the Steel and Sons Cup where they lost out to Newington on penalties while they’ve progressed the fifth round of the Irish Cup.

However, his form caught the eye of the Bannsiders, who fought off interest from Glenavon, among others, to secure ‘Fitzy’ on a three-year deal.

McAlorum insisted Fitzpatrick moved on with his blessing, but admits he could struggle to find a like-for-like replacement in the January transfer window.

“There are very few players we’ll be able to sign who will be of the same ability as Matthew (Fitzpatrick),” said McAlorum.

“We are still looking and we’ve a few names in the mix. Hopefully, they’ll be able to come in and do a job for us.

“We don’t want to go out and sign someone just for the sake of it - they have to be the right fit for the club and have the right type of mentality for the team.”

While Belfast Celtic will be huge outsiders for Saturday’s clash, they’ve claimed a few scalps in their cup run to date.

Their reward is a clash with Irish Premiership newcomers Larne, who are currently sixth in the league and McAlorum knows his side will be up against it this weekend.

“I think we were hoping to get one of the bigger teams to help the club in terms of finance,” said McAlorum.

“You can’t get a bigger team than Larne at the minute. They are an up and coming side. I’ve a decent connection with Larne with Tiernan Lynch.
“I know them very well and I’ve won the Irish Cup with Tiernan. It will be a good day.

“They are a great side and I’ve watched them a few times this season. They play a similar style to ourselves. They like to keep the ball down and pass it about. It should be a good game for the neutrals.

“We are under no illusions - it is going to be a massive test for us.”