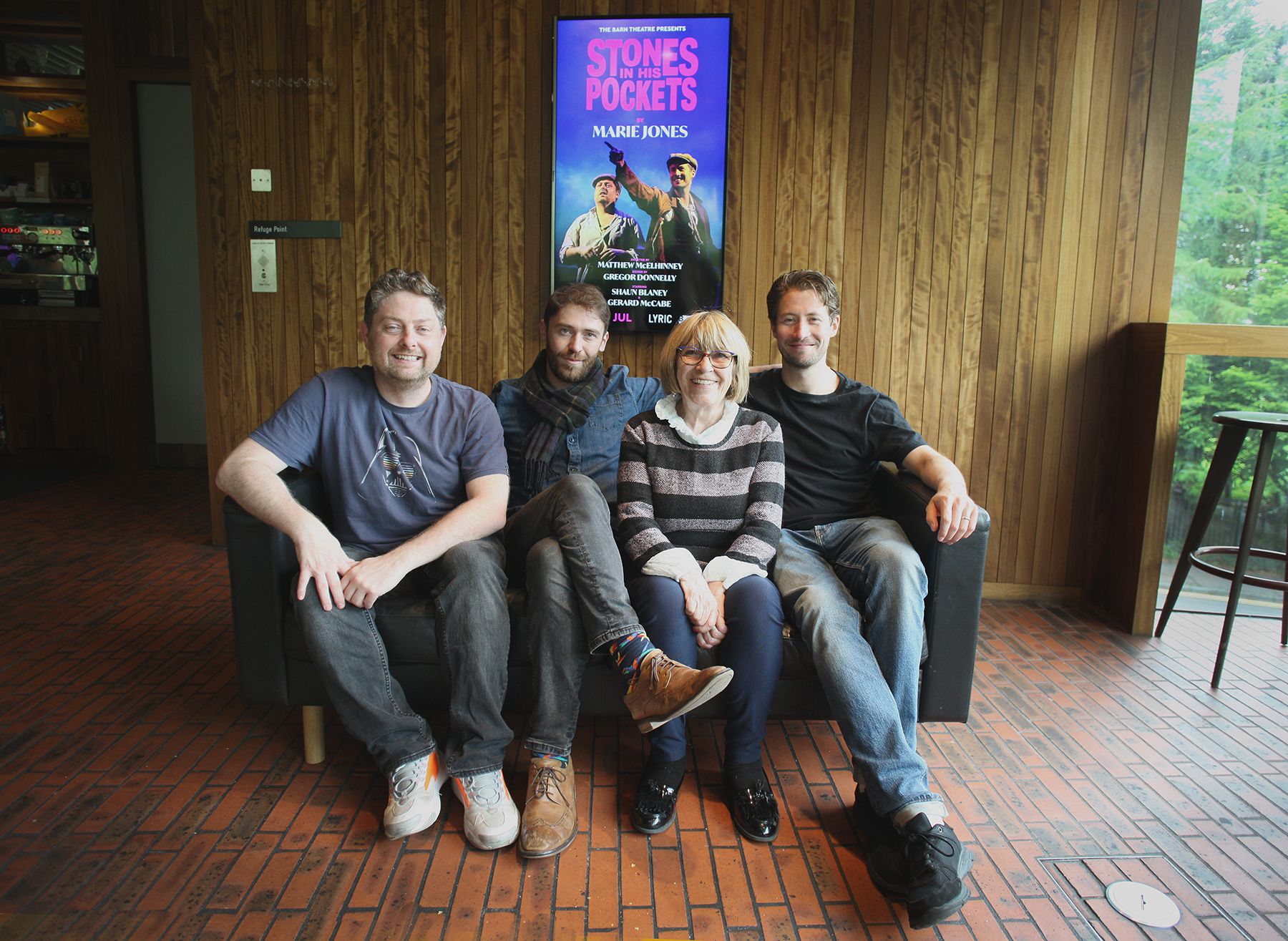 TWENTY-three years after Marie Jones’ hit 'dramedy' Stones In His Pockets premiered at the Lyric theatre, the Lawrence Oliver Award winning show is set to return to its birthplace like never before.

Originally directed by Marie’s husband – Derry Girls and Star Wars’ Ian McElhinney – the couples' son Matthew has now taken up the reigns to bring this much- loved production into modernity. Taking time out of rehearsals, Marie, Matthew, actors Gerard McCabe and Shaun Blaney spoke to the Andersonstown News about this latest production.

“We never thought that we would see the play back here. It was about five years ago when it was last produced with a performance in the Opera House,” Marie said.

“I had seen it so many times and there have been so many mediocre productions of it that I thought it was going to bed and I never wanted to see it again.”

Marie added that she had been asked by her agent multiple times to let the production return but she said no. After a conversation with her son, who had been directing shows at the time, he agreed to direct it.

“I agreed that if it was to come back, I would decide on the casting, who the director would be and I wanted their ideas to be listened to. The stars just aligned.”

Given the fact that the play was written by his mother and originally directed by his father, there is a lot of pressure on Matthew to get the direction right.

“When the play was originally performed the stars also aligned," said Matthew. "You had a brilliant play, a brilliant director and a perfect cast. It just took the world by storm.

“90 per cent of getting it right is getting the right cast. People have tried to recreate the original and it became stale. In recent years there have been some stinking productions of it and we had to think about how we make it fresh and recreate that magic.”

The story of Stones In His Pockets will be even more relevant to local audiences today due to the bustling film industry in Belfast alongside an increased awareness around mental health and exploitation.

“At the time when it was first performed there was lots of filming happening around Ireland but not up here. People were starting to get curious about the film world, what it was like and everyone wanted to be an extra. Now, probably everyone has been an extra which makes it more interesting,” Marie added.

“I couldn’t have done anything without Gerard,” he said. “He is a comedy genius. He has the lion’s share of the work in this and I’m like the Maypole with his characters flying around me,” he said.

Gerard added: “We joke about the perfect storm and the starts aligning but there was something in that. With Covid happening, we were still in contact through different things and we were like a team before this happened. All of a sudden, the Barn Theatre came along and allowed this to happen.”

Stones in His Pockets runs at the Lyric Theatre from 7 June to 3 July and Marie Jones tells us to expect to see some “very famous faces” pop up throughout the performance as the stars become the extras, and the extras become the stars.