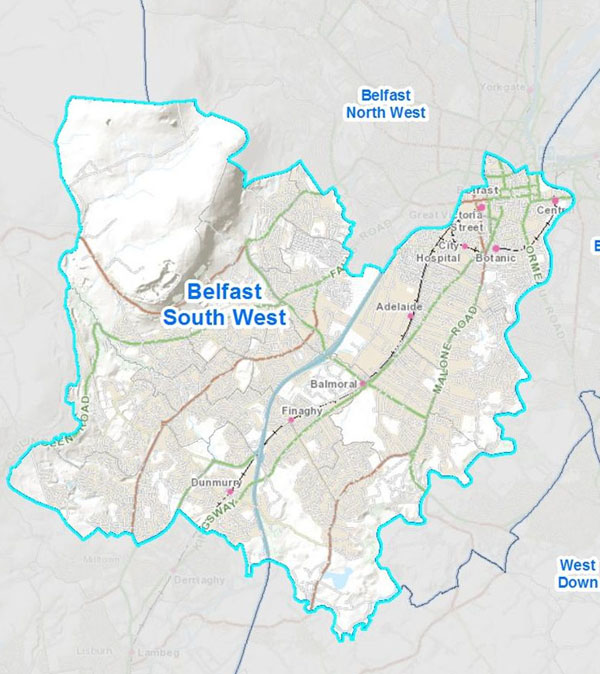 Belfast South and Belfast West will disappear under the new plan, to be largely replaced by Belfast South West

THE Boundary Commission for Northern Ireland is to hold public hearings across the north on its provisional proposals for the new Parliamentary constituencies.

The suggestions have brought a range of reaction to from local political parties, with a consensus forming around the contention that the new changes will be of more benefit to nationalism than to unionism.

The hearing will be conducted by independent chairs and will provide an opportunity for people to make oral representations about the Commission’s provisional proposals. The hearings will operate over three sessions. The first will be from 10am to 1pm, then 2pm to 4pm, concluding with an evening session 6pm to 8pm. The South Belfast hearing is on October 20.

Secretary to the Commission, Eamonn McConville, said: “The hearings offer people another way of telling us what they like about the provisional proposals or to provide the Commission with information to support any changes that they think would improve the proposals. Representations can also be made online at BCNI2018.uk or in writing before the 28th of November when the public consultation closes.

“The Commission will consider all information received during public consultations and, subject to the legislative requirements of the 2018 Review, decide whether the provisional proposals should be amended,” he added.

The 2018 Review began on February 24, 2016 and, informed by public consultation, will determine how best to decrease the number of Northern Ireland constituencies from 18 to 17, as required by the Parliamentary Voting System and Constituencies Act 2011.

The public hearings will be held at the following venues:

Anyone wishing to attend and/or present oral evidence during the hearing should register online at www.bcni.eventbrite.com or on the morning of the hearing for the purpose of arranging a timetable of speakers.