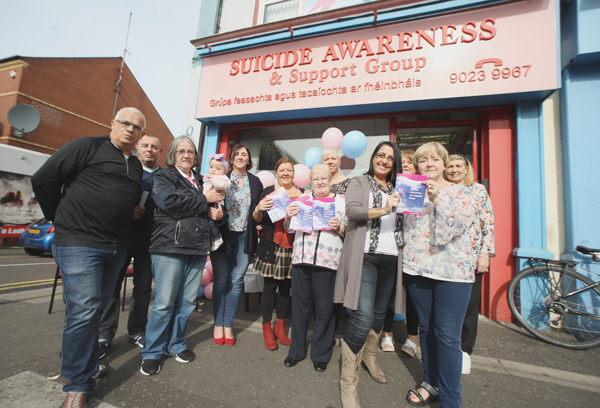 AWARENESS: The a coffee and information session at Suicide Awareness on the Falls Road

SEVERAL events were held throughout the community on Tuesday to mark World Suicide Prevention Day.
Falls Road-based Suicide Awareness and Support Group hosted a coffee and information session that welcomed families who have and are relying on the centre’s invaluable services. Centre Manager and founding member of the organisation Margaret Walker spoke of the communities “incredible support” for the organisation.
“My brother took his life in 1999, there was no support for families then. At that time families bereaved got together and campaigned and lobbied and that is where the ‘Protect Life 2’ strategy came from, it’s families’ voices, their pain, their hurt,” she said.
“We have families here that have been touched by bereavement through suicide, living with someone who is suicidal and also we have survivors with us who have come through the other end.
“We don’t have a waiting list at present but the waiting list for counselling is sky rocketing at present, it’s up to four months. We would want to remind people that Lifeline is 24/7 for people in distress, in despair. We would tell them to pick up the phone, the trained staff are there.”
Margaret told the Andersonstown News how she “welcomed” the publication of the Department of Health’s long-awaited Protect Life 2 suicide prevention plan which was released on Monday.
“It’s our 20th anniversary next May – although we don’t want to be here 20 years later but unfortunately the way society is there is such a need for the service and it needs to be local service delivered by local people.”