Swifts and Newington await their fate after abandoned cup tie 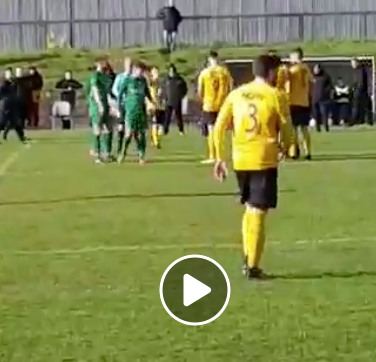 THERE were chaotic scenes at Donegal Celtic Park on Saturday afternoon as the Steel & Sons Cup quarter-final tie between St James’ Swifts and Newington was abandoned on 45 minutes.

Referee Mark Milligan said his reason for the abandonment was that players had left the field of play to engage in a flare up between Newington’s Joe McDonnell and some Swifts fans after the player had been sent-off for a second yellow card.

At the time Swifts were leading the game 2-0 in what had been an entertaining affair.

Eugene Gallagher had given the hosts an 11th minute lead with an excellent strike from the right of the box and despite Swifts going down to 10 men after Mark Clarke had received a second yellow on 37 minutes for a clumsy challenge, they went 2-0 ahead when Brendan Glackin turned Gallagher’s cross home.

However, things were to quickly unravel on the stroke of half-time as McDonnell – cautioned on 15 minutes for his reaction to a challenge – was shown a second yellow and therefore red.

As he was going off, McDonnell reacted to taunts and a plastic water bottle was thrown towards him.

This led to punches thrown with several Newington players following him off the pitch as scuffles ensued. Things appeared to have calmed down with the players returning to the field, but the incident then sparked off again as McDonnell was being led to the dressing rooms. Again, players left the pitch, some it seemed were trying to calm the situation rather than join in, but the referee had seen enough, saying afterwards the chaotic scenes were out of control and he had no choice but to abandon the game.

What happens now is up to the Co. Antrim FA. The draw for the semi-finals were made on Saturday with East Belfast awaiting the winner of Saturday’s game if that is to be replayed or not.
The Co. Antrim secretary was unavailable for comment this morning, but a decision is expected in the coming days.