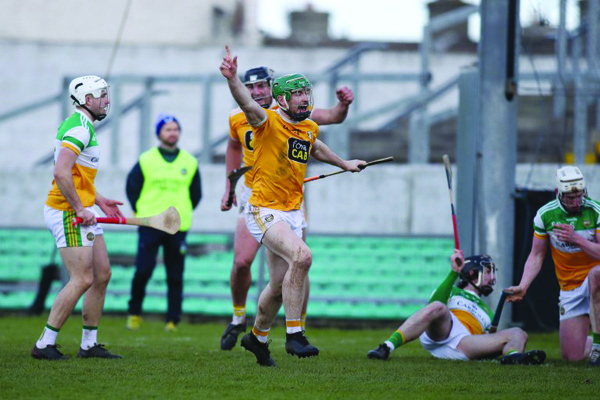 Antrim hurling captain Conor McCann, pictured scoring a late goal against Offaly in O’Connor Park back in March, has said the idea of a ‘Team Ulster’ is unworkable following recent debate on the concept in the media.

ANTRIM senior hurling captain Conor McCann says he doesn’t envisage the county ever being involved with a ‘Team Ulster’ following recent debates as to the merits of the concept.

The idea was first mooted by former Cork star Donal Óg Cusack on the Sunday Game back in 2013, but failed to gain much traction within the province and ‘Team Ulster’ appeared to be dead in the water.

However, several high profile figures within Ulster hurling have given their support to the idea in recent weeks including former Down goalkeeper Graham Clarke, former Armagh star Cathal Carvill as well as Slaughtneil manager, Michael McShane, and Slaughtneil captain and Derry ace Chrissy McKaigue.

Indeed, writing in his weekly Gaelic Life column last week, Carvill suggested that a ‘Team Ulster’ not only didn’t need Antrim, but that a provincial select from the other eight counties could beat Antrim.

It would appear that, should the project ever get off the ground, any ‘Team Ulster’ would not include Antrim, who need to defeat to Kerry in the Division 2A final to return to Division of the Allianz Hurling League.

“I think it is probably a good conversation to be had about Ulster hurling in general, but it is not really a runner from an Antrim perspective,” stated McCann.

“It is welcoming to hear people talking about the state of Ulster hurling.

“I don’t think, when you look at the smaller details, it is possible and I don’t think there is much chance of it taking place, certainly not with Antrim involved anyway.

“We are on the verge of a return to the top tier so that’s what we are focused on.”

While welcoming any conversation surrounding improving hurling in the province, McCann feels the idea lacks merits when the smaller details are questioned.

There are obvious long-term doubts over the sustainability of a ‘Team Ulster’ in terms of a training base, support and funding, but McCann also feels that a combined team, even without Antrim, would be a backward step for each of the other eight counties involved.

“There are a lot of stumbling blocks, the geography of Ulster for a start. If it was just Antrim, Derry, Armagh and Down, you could maybe get some compromise,” added the Antrim skipper.

“There are a few players from the likes of Tyrone and Donegal who would be considered as well.

“Probably most counties could provide at least one player so you can’t ask those boys to drive two hours to training. That’s just one thing.

“What happens when a county is missing five or six of their players who are on the Ulster teams? What happens to the rest of the squad?

“Would they see any point in playing for the county if their best players aren’t there?

“You could have a situation where an Ulster team would be coming up against a really good side from the South who have been going all year whereas an Ulster side might only have been together for a couple of months – is that fair?

“I think longer term, it isn’t something that would help individual counties, I think it would actually set them back.”

Earlier this month, the GAA published its ‘Safe Return to Gaelic Games’ document with July 31 as the target date for the resumption of club games with county action scheduled to start on October 17.

Later this month, the GAA will give further details on how the inter-county season will be rescheduled in light of the Coronavirus pandemic, but it remains unclear if the Allianz Leagues will be completed.

McCann stressed that Antrim’s sole focus remains on securing their return to the top flight, but his views on ‘Team Ulster’ were echoed by Antrim chairman Ciarán McCavana, who feels the absence of Gaelic Games during the Covid-19 pandemic has led to the idea being revisited.

McCavana also feels that other Ulster counties who wish to promote hurling could do worse than follow Antrim’s lead while both men have called on the Ulster Hurling Championship to be reinstated (see P55).

“I think people maybe have had too much time on their hands during lockdown,” stated McCavana.

“Is anyone calling for a ‘Team Munster’ or a ‘Team Leinster’ in football?

“As well as investing time and money in Gaelfast and getting their structures in place, Antrim are on the cusp of getting back to Division One of the hurling league. We are due to play Kerry in the Division 2A final.

“There are definitely three or four teams at that top table who Antrim wouldn’t fear. On any given day, we could hold our own against them.

“Now people are wanting to talk about a Team Ulster?

“I don’t believe the other eight counties in Ulster are giving hurling the respect it is due. If the other counties eight counties want to come together and form a Team Ulster without Antrim, I would wish them all the best.

“It is not something Antrim would be taking part in.”

A number of club sides from across Ulster compete in the Antrim hurling leagues and the Antrim chairman feels having an Ulster hurling league might be a better way of promoting the code in the other counties.

“I think it is up to the other counties in Ulster and the Ulster Council to put their shoulder to the wheel,” added the Naomh Éanna clubman.

“The Antrim Hurling leagues welcome clubs from other counties, but we don’t get any additional funding for it, we do it out of good will. It can cause problems when you have a discipline issue.

“Perhaps the Ulster Council could explore the possibility of a proper Ulster Hurling League for the other counties and that then could provide the starting point for a ‘Team Ulster’ at some point down the line.”

When the dust settles we will be back in action.. we look forward to our 2020 club championship.
Photo from Curly pic.twitter.com/V1USE9v5aD