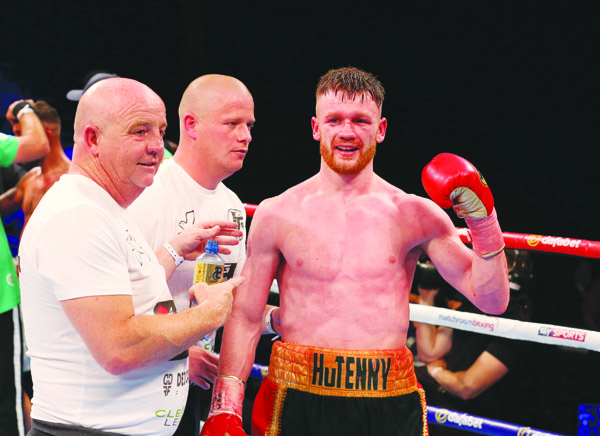 James Tennyson says he and trainer, Tony Dunlop (left) have devised the perfect game plan for a victory on Saturday that could lead to a world title opportunity later in the year

JAMES Tennyson believes his experience of the big stage can help him add the European and Commonwealth super-featherweight title to his WBA International strap against Martin J Ward in London on Saturday night.

It will be almost two years to the day since his last outing in England when a weight-drained Tennyson was stopped in five by Ryan Walsh at the Copper Box Arena in a British featherweight challenge, so he will be hoping for much better at the O2 Arena on the Bellew-Haye 2 undercard this weekend.

Since then, the 24 year-old Poleglass banger has moved up to the 130lb division and has looked much more comfortable, scoring three big wins in 2017 over Declan Geraghty, Ryan Doyle and Darren Traynor, picking up that WBA bauble along the way that more importantly, brings a world ranking.

‘The Assassin’ sits at two in that governing body’s world ratings, so a victory this Saturday could all but confirm a crack at a world title this year.

“I’m going over there this time as a completely different boxer,” said Tennyson ahead of Saturday’s fight that will be broadcast, live on Sky Sports Box Office.

“I’m a lot more experienced and have just come off the back of three big wins over the last year, so I’m really looking forward to it and more than ready for what lies ahead.

“This is my second defence (of the WBA International belt) now, so another good win will move me further up the ladder.

“We were pretty close to a (world) title shot there, but I think if we get another win here it could come.”

Standing in his way is a man who Belfast fight fans will be familiar with.

Martin J Ward edged out Anthony Cacace in a British and Commonwealth title defence last summer before moving on and impressing on the undercard of Katie Taylor’s world title defence against Jessica McCaskill on December 13, when claiming the vacant European crown against Juli Giner.

The 26 year-old showed he has the power to add to his slick boxing, so Tennyson is forewarned.
However, ‘Teeny’ has faced a similar style in Geraghty and despite losing some rounds, proved he has the power in his fists to quickly turn things his way.

“He has a similar style to Geraghty,” notes Tennyson who has sparred Cacace in the build-up, which will give him an extra insight into his rival this week.

“He’s orthodox and probably won’t be as elusive, but he has a same sort of style and that’s something I have been getting ready for.

“I have watched the Cacace fight. He was catching him with some nice shots, but they were single shots. If he had have upped his work-rate a bit more...

“He (Ward) still boxed a brilliant fight, but Tony (Dunlop, trainer) knows the craic and has watched plenty of him so we will be more than ready.”

It is almost incredible to think that Tennyson is still just 24 years-old given he is a veteran of 23 fights, winning 21 and losing just two.

That bodes well given his ring IQ will be tested to the full against an opponent who is a master of setting traps and making opponents pay to bank rounds.

“I turned pro when I was young, so I had plenty of learning fights,” he continued.

“I’ve progressed a good amount for the short time I have been a pro. I feel I have gained plenty of experience and enough for this fight.

“Obviously, every fight you learn new things, but I’m ready.”

Should Tennyson prevail this weekend, the general consensus is that it will be done inside the distance.

It could be a similar story to the Geraghty fight, where Tennyson is out-boxed, but flips things his way thanks to the dynamite in his fists.

There will be a decent support there for him at the sold-out O2 Arena and he is confident it will be a happy journey home with an extra passenger on board.

“Get the win, that’s it,” he said when asked for the game plan.

“Tony has everything set. We’ve worked hard and I’m flying going into this. I’m bouncing with confidence and I’m really looking forward to it.

“We’re bringing a good crowd over for it, so there will be plenty of happy faces around London after.”