The bald monk is set for an Irish return 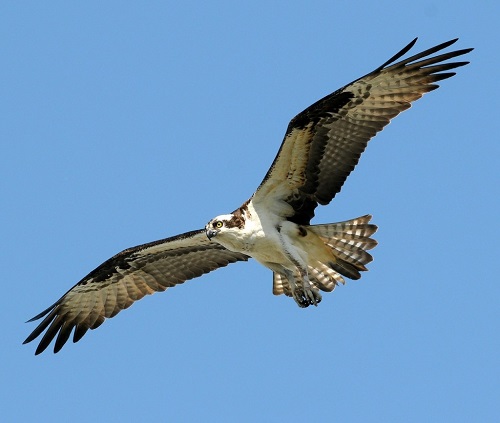 MAJESTIC: Could the osprey be a familiar sight over the Belfast Hills?

IT was high in the sky above the house gliding on the thermals like a kite.

Birds of prey are often seen over Belfast homes – especially if you live in proximity to our hills. But this was unusual. It didn’t have the straight eagle-like wings of a buzzard, but it was about the same size. And it was a mottled white colour with angled wings. Dúlra ran inside to get the binoculars and went back out just in time to focus as the bird disappeared behind Divis. This had all the hallmarks of a bird that he thought he’d never see. It looked for all the world like osprey – that unique raptor that plucks giant fish out of lakes with its talons.

There are at most 11 species of birds of prey in Ireland – terrible and selfish persecution has meant we’ve lost at least seven others. Today, because of those centuries of shooting and poisoning, we have the lowest diversity of raptor species. So you’d think it would be easy to tell those 11 species apart. But with birds of prey, males and females usually look different and juvenile birds are different again.

So maybe Dúlra was mistaken, guilty of seeing what he longed to see. For one thing, there’s probably only a couple of pairs of osprey breeding in Ireland, and their top-secret nests are believed to be in Mayo, a good 150 miles away.

But they do breed a lot closer to Belfast as the proverbial crow fields – in Scotland. Could one of them be taking a day trip to Ireland? Well, Dúlra decided to skim the internet for sightings. And, believe it or not in the past week an osprey was spotted at Quoile nature reserve in Downpatrick and then later at Lough Beg near the northern shore of Lough Neagh. Draw a line on a map between these two spots and you’d come right across the Belfast hills.

Neither of these two sightings was front-page news. Ospreys are unusual among our birds of prey as they migrate to Africa just like swallows. So on their way from Scotland, they often take the scenic route south through lovely Ireland. And of course this country has perfect habits for them. They lived here for centuries – their Irish name coirneach was the name given to the unique hairstyle of Irish monks, who used to shave a patch through the centre of their heads, with hair on either side. The osprey has similar markings. Because they ate fish, they were quickly exterminated as competition. Today it’s not fish farmers who target them in Scotland, but egg collectors. In 1988, 11 out of 49 Scottish nests were robbed.

Scandinavian
But the Scottish experience gives us hope. There were no ospreys there between 1919 and 1954, when a Scandinavian pair suddenly arrived at Loch Garten. Now 1.5 million people visit there to see this amazing bird fish – an important tourist attraction. And there are more than 300 pairs in Scotland today.

Ospreys can live for up to 32 years, and a single mother can rear 50 chicks in her lifetime. Experts say the lone birds like the one above Dúlra’s house can be forerunners to a breeding attempt. It’s unlikely to build a nest near the Half Moon Lake or the Waterworks, but Lough Neagh would be perfect. And they love each other’s company, and as soon as one pair finds a spot, they call their mates and, as in Scotland, form colonies.

In America, nest sites were dropped like darts from helicopters into mud to encourage the ospreys to stay. Should we do that at Lough Neagh. The osprey remains one of the most widespread birds in the world – although certainly not the most numerous, with 50,000 pair worldwide. In fact, it breeds almost everywhere except – bar a recent exception in Mayo – our beautiful country.
But hopefully the bald monk is about return after centuries in exile.