‘The Belfast Hammers’ going from strength-to-strength after two decades 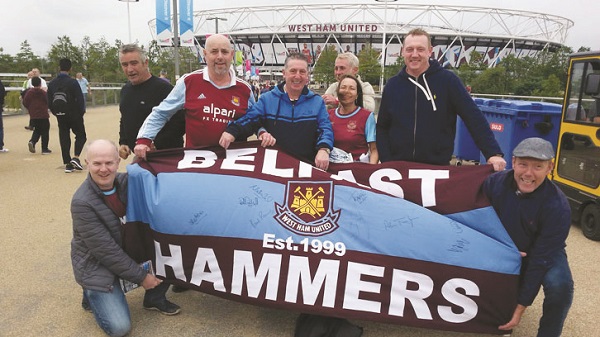 Club members outside London Stadium ahead of a game this season

THE Saturday morning exodus to England for local soccer fans is nothing new as the International and City Airports would see various teams represented, but it’s not just the typical clubs like Liverpool and Manchester United who have that loyal following from this side of the Irish Sea.

‘The Belfast Hammers’ have been making the trip to the Boleyn Ground (Upton Park) and more gently, the London Stadium for just over 20 years as West Ham United fanatics from Belfast and further afield descend upon east London to cheer on The Irons.

The supporters club was revived back in 1999 by Peter O’Prey and has gone from strength-to-strength.

Indeed, the club ought to have been celebrating its birthday in May with a matchday breakfast with West Ham legend Phil Parkes at the Stratford Theatre, followed by drinks on the popular Hammers Chat boats on the WaterWorks River, just a short distance from London Stadium.

There, Belfast Hammers were also set to meet more of their heroes, making their special visit even more memorable, only for the COVID-19 pandemic to see the group’s plans cancelled.

“We’d be well-known in West Ham circles - maybe not anywhere else,” said Peter, who is a keen blogger on various fan forums.

“There was a club in West Belfast years ago, but people drifted off when they got married and different things.

“I was going over on my own so I decided to start the club up again myself. We started from very humble beginnings in 1999 and have grown from then.”

Following an English team is hardly a new phenomenon, but of course, there are the traditional clubs that fans flock to, so why West Ham?

“In the 70s here, we would have got the London TV feed and started following the London clubs, then there were others who may have had fathers who lived in London for a while.”

When not in London, club members would have gathered in The King’s Head for games before relocating to the Ulster Sports Club in the city centre, but the club has been present at the majority of major West Ham games over the past two decades including FA Cup finals, Playoff finals and the final game at the Boleyn Ground before relocation.

It is on these trips where the bonds are formed with other West Ham fans and the reason why they have become part of the furniture on match days in Stratford.

“True Hammers have embraced our passion and we have made many friends,” Peter added.

“Our routine became an enjoyable habit. We arranged transfers and lifts to Belfast City or International airports, making a 4.30 am start!

“While we are ‘Belfast Hammers, we have members from Derry, Donegal and Tyrone including Sean and Chris Douch from Omagh.”

The club has been present at various club legends events in recent years involving Billy Bonds, Tony Gayle, Julian Dicks and Steve Lomas who Peter calls “a great friend to the club.”

“A company called E13 run it but we have become friendly with the guy in charge and we would be allowed in for a drink an hour before the event starts because we have to travel over,” he continued.

“We’d also head to the Romford dogs and the West Ham chaplain has come along a few times, so it’s all great craic.

“We were worried when we moved from the Boleyn Ground what it would be like, but it’s great craic around the Barges on the day of a game.”

Aside from their matchday activities, Belfast Hammers have enjoyed the privilege of presenting their Player of the Year award to players, welcoming West Ham legends to Belfast and producing their own range of merchandise.

The lockdown may have prevented Belfast Hammers from making their latest trip to London, but O’Prey says they continue to watch on, passionately, from home, hoping the club can beat the drop to the Championship.

Whatever happens in that regard, they will be back on the road to follow their team.

“Sadly, our meetings have been cancelled due to COVID, but members’ safety has to take priority and we have held meetings online,” he said.

“We are delighted that Premier League football is back, albeit that the fans can only watch from afar. Although we watch the televised games in Belfast it is nothing compared to our visits in the flesh.

“We have worked hard for our reputation as a friendly and diehard supporters’ group who always look for a good time. We are very proud of our small part in the West Ham story and hope that the future will allow all West Ham fans the opportunity to return to the home of our beloved club.

“If anyone is interested in joining us, we can be contacted through Facebook on ‘The Belfast Hammers’ page.”