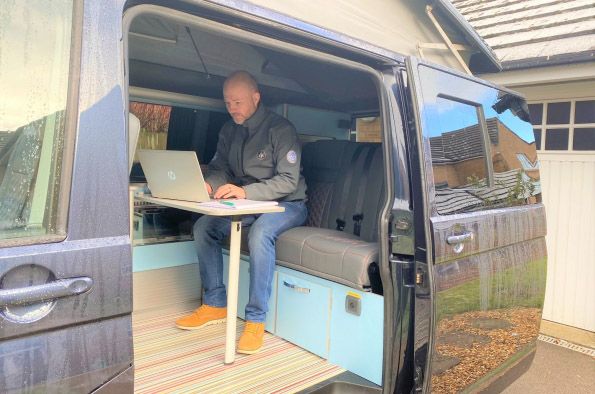 OPTION: The office van is proving a popular and very versatile alternative to the garden shed or pod for those working out of office

THE campervan market witnessed an unpredictable trend towards the end of 2020 with customers buying ‘Revolution Campervans’ to use as mobile offices as an alternative to having a garden shed or pod office.

An ‘office van’ can be used for work as well as doubling as a vehicle for camping adventures and staycations and Kelly, who owns her own candle and jewellery making business, bought one such van in the first lockdown to use for a mix of work and leisure.

Kelly said: “My brand is inspired by beach life, so sometimes I like to take my campervan to the local beach and make my jewellery with a view of the sea and a hot cup of tea to hand. It’s also a great place to go to get away from the kids or my partner if I have to work and need some peace and quiet.”

Kelly’s campervan will also be used as a mobile shop when artisan and speciality markets events open, giving her the capability to simply open a door to sell her goods. She can also expand her reach by travelling the length of the country to events not accessible before and now has an affordable place to eat and sleep when she arrives.

A second fan of the office van, Chris, said the pandemic had changed his work patterns, and with most of his family at home in the lockdown, the van was somewhere to go to work and escape the distractions in the house. He can park it on his drive (or in fact anywhere) and use it as a home office. His version has all the kit needed to run his office, such as USB points and a mains hook-up, it has a layout to facilitate face to face meetings with clients utilising the swivel front seats plus the bonus of a fridge and cooker.

Some people build home offices or pods in their garden, but Chris believes that his campervan is way cooler, he can travel to his clients for meetings and he gets the added benefit of weekend escapism. Chris said he lives not far from a national park, so it’s great for a day out, and once it’s safe to do so, he plans to take it to France and tour the whole of Ireland.

A local company quoted between £6k and £20k to supply and install a basic garden office or pod which would be worth less than half of that layout once installed whereas a quality office van costing from £30k for a conversion could hold its value much better and give you those weekender and road trip opportunities as well. It may not be for everyone, but if you are in the market to create a flexible space to work in, somewhere to get peace and quiet and room to think when you need it, why not have one built for you that you can holiday in as well.

Back to the van future


FOR a good many years the Ford Transit has been the mainstay of the Light Commercial Vehicle (LCV) marketplace. Over more recent years the Mercedes Sprinter and Vito challenged this perception. However, after the announcement of the 2021 International Van of the year awards, there are a few new kids on the block.

The highest honour in the LCV industry has been won for the first time by an electrically powered vehicle. This is a global award which this year celebrates its 30th anniversary.
The PSA Group developed the basis of a van before sharing it with the companies they own. Those companies are Peugeot, who badged it the e-Expert; Citroën who named it the e-Dispatch; and Vauxhall who called it the Vivaro-e. The combination of these three variations took the top spot in the awards. The Mercedes-Benz eSprinter took second spot followed by the latest evolution of the Mercedes Vito in third and the new Ford Transit Active and Trail models in fourth.

The announcement was made on a special web-based broadcas. Commenting on PSA’s achievement, the second such award in three years, a spokesperson said: “Congratulations to Group PSA on its stringent research, development and investment on producing an excellent range of electric powered vans, that exceed expectations and are without compromise.”

The award trophy, dedicated to Anders Karlsson, the Swedish jury member who died recently, will be presented to Xavier Peugeot at Groupe PSA’s headquarters in Paris early this year. “The PSA-vans are the first electric vans in the market to be sold across Europe with a range of more than 190 miles. They are solidly built with great driveability and except for the lower noise-levels, there isn’t much separating the drive feeling from a diesel version.

“This new generation of van gives a tremendous push for e-mobility in the professional business marketplace and forces the accessibility to all and scaling of emission-free transport. From now on the business case is real and electric vehicles can be on same level with petrol and diesel versions. It is a convincing package with a smooth and silent driveline and a consistent DC quick charger as standard.”

This range of e-vans is setting a new standard and pushing progress toward widespread market penetration. That’s what a worthy ‘International Van of the Year’ title holder must deliver. Even more so when each brand has electric derivatives from the humble delivery van through to people-carriers, campervans and shuttle buses.

If you like me are of a certain age you will remember bread and milk being delivered by electric vehicles with the most famous being the milk float. You will remember electric buses (trolley buses) carrying us up and down the road. Surely this is the most classic case of back to the future we have witnessed. So, watch out for your postie, parcel delivery man or tradesperson pulling up in an electric van somewhere near you soon.