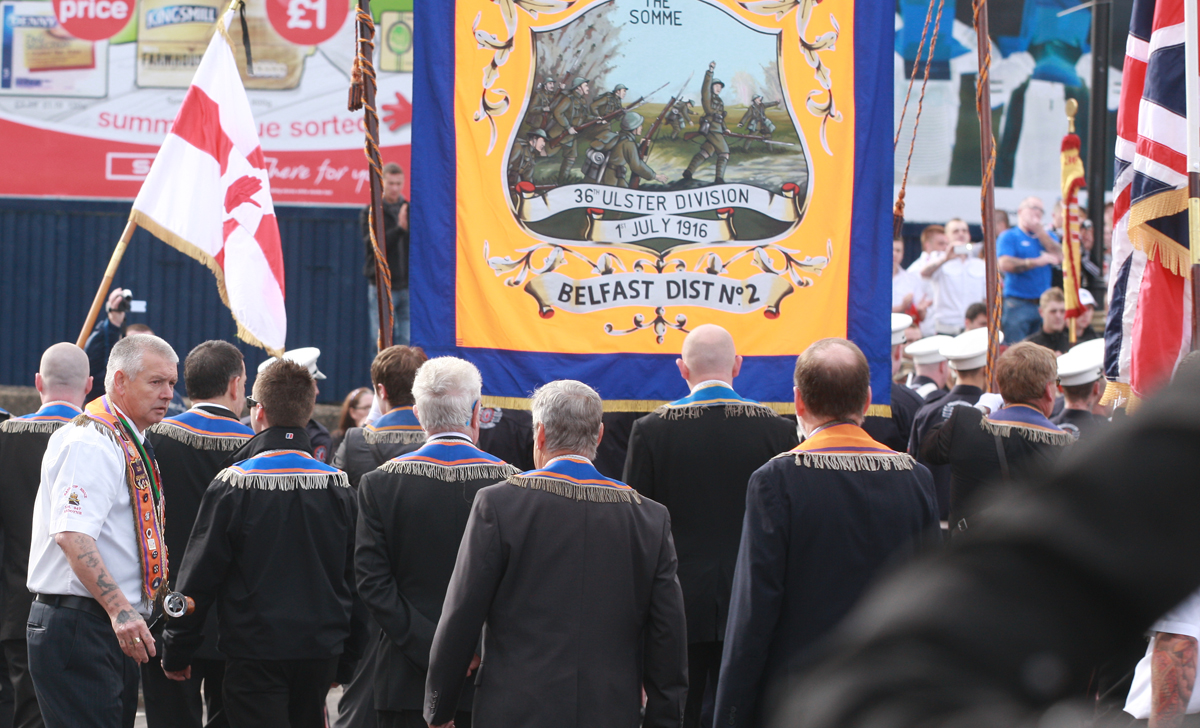 BANNERMEN: The Orange Order says it exists to promote Protestant culture and values

WITH the various bloody and sometimes lethal clashes between blacks and whites in the US recently, you may have missed the emergence of another grouping there. It’s an organisation which is liable to add to the problems of an already-divided society. They’re called the Milwaukee Power Maintenance (MPM), and were established in Wisconsin just under a year ago. It came into being following a clash between two local groups, as a result of which two young Muslim men were killed. Its numbers have swollen since that time. It is a right-wing organisation which claims it exists to protect and promote Christian values.

The organisation admits only people who can show they are Christian. It has created its own uniform and has held marches in several major cities. Its rules exclude anyone who is Muslim, anyone who habitually associates with Muslims, anyone who is in a relationship with a Muslim person. It says it is not opposed to Muslim people, it just doesn’t have room for them in its ranks. Last month it registered to conduct a march in an area of Milwaukee which has many Muslim residents. The Wisconsin authorities banned the march and the MPM held protests, claiming this ban infringed their civil rights. Muslim leaders who have spoken out against the MPM have been denounced as anti-Christian.

Okay, let me come clean. All of the above is made up. There is no MPM, they have not marched or worn uniforms, they have not mocked Muslim culture, they don’t have rules forbidding members from associating with Muslims. The very idea of such an organisation would run counter to the liberties most Americans hold dear and of course it couldn’t help but heighten tension.

But let’s consider an organisation that does exist and is nearer home. This organisation was born out of a clash between two sectarian groups, a clash which left some thirty Catholics dead. This organisation denies that it is anti-Catholic and says it exists merely to promote Protestant values. As a result, it follows that there could not be room for Catholics within its ranks.

It has demanded the right to walk anywhere it chooses and when the authorities refuse to give in, it establishes protests that are a massive drain on the public purse. It has its own sashes and banners, it marches to the thud of drums, it insists on its right to march anywhere it chooses, including areas where Catholics live and where it would be unwelcome.

Those who have spoken out against this organisation have been denounced as intolerant. Yes, Virginia, the organisation I’m referring to is the Orange Order. We’re told that these days there is only a small number of contentious Orange marches. That’s good. But regardless of whether or not it meets opposition, is the Orange Order an organisation that contributes to reconciliation and peace in twenty-first century Ireland? I think the answer is obviously no.

Does the existence of an organisation that speaks disparagingly of Catholicism, that has rules barring not just Catholics but anyone in a relationship with a Catholic or who has attended a Catholic service – does such an organisation contribute to the common good in this part of Ireland? Again, the answer is an unambiguous no.

Every year at this time, thousands of people leave the north, booking their holidays so they can avoid the thundering drums, the swaggering and the drinking and, sometimes, the violence. Unionists are, of course, entitled to their traditions and culture, the same as everyone else. But where that tradition or culture is built on anti-Catholicism and triumphalism, surely any sensible Protestant would call for a thorough review of the organisation’s rules and beliefs.

Such a review could start by questioning whether an organisation is healthy if it feels the need to conduct thousands of marches every year to remind itself and anyone/everyone else of battles in which its neighbours were defeated?

A good day out in mid-summer is always to be welcomed. But a day out under the banner of exclusion and insensitivity is a day that comes at too high a price.