The Fureys: Uniting generations through music 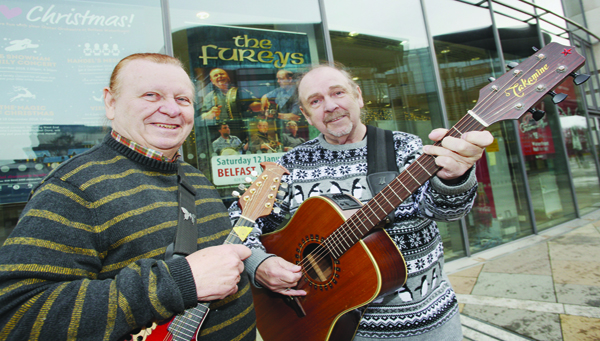 BELFAST BOUND: George and Eddie Furey celebrate their 40th anniversary at the Waterfront Hall playing songs from their incredible backlog of material and music from their new album ‘The Fureys 40 Years On’

DESPITE its relatively small population, ours has never been a country with a shortage of musicians on the international stage, but few of them have had an impact as lasting as The Fureys.

Formed in the 1978, the iconic folk group has entertained audiences throughout the world for 40 years. While the band’s line-up has inevitably changed over the years, brothers George and Eddie Furey have continued to tour the globe, bringing the finest ballads to generations old and new.

To celebrate their 40th anniversary they have released a new album, ‘The Fureys 40 Years On… to be continued’, and will play a headline gig at Belfast’s Waterfront this January. Ahead of the gig, the Andersonstown News met with George and Eddie, who had just returned from the Netherlands leg of their jubilee tour. While their music has touched thousands, if not millions of people, George and Eddie are a pair without air and graces. Our chat was an informal one that took place in the Waterfront Hall’s lobby, with school kids, excited by their trip to the panto, providing an excitable background hum.

As for the story of The Fureys – it’s one of famous faces, infamous sessions, and more years worth of craic than can be adequately depicted in a single newspaper article. However, with the release of their new album – which foregoes many of the obvious tracks and is jammed full of new material – our conversation almost immediately turned to things more current.

“A lot of the songs we would’ve heard as kids and would’ve grown up singing them,” Eddie explained.

“Streets of London is one of them, which was written by Ralph McTell, and we know Ralph going back many, many years.”

George added: “The first track on the album was written by a Donegal man, Jordy Gallagher, and he wrote the song about eight years ago.

“Joe, our manager knows him very well and he gave our manager the song to have a listen to because he thought it might suit on the album because it’s a protest song. A lot of those songs from years ago are all protest songs, from the 60s.

“We grew up with all these protest years ago. There was a great song years ago called The Eve of Destruction, and it’s about what would happen to us if someone dropped the big bomb – we grew up with those songs. So this song really suits the album.”

“The Day’s Gonna come is a great song,” Eddie concurred.

“The song tells you what’s happening to the world and those older songs tell you what was happening at that time. The words are; ‘the day is gonna come when the water runs out and the wells run try, man’s so dumb, fish can’t swim and birds can’t fly’.”

Although it’s an anniversary album, the new CD is new territory for The Fureys, who had not previously recorded much of its material. But much like their previous albums, The Fureys have continued to record songs from some of world’s best songwriters.

“The songs are mostly from people we’ve met over the years on our tours,” Eddie said.

“We’ve sang a lot of great ballads over the years.

“We even recorded an album of Charlie Chaplin songs. Josie, Charlie Chaplin’s second youngest daughter, was cleaning out her father’s house and she found five songs that were never recorded before, written by Charlie Chaplin, and she asked us if we would do the songs. We had to do them, and we had to do them with an orchestra. We had a 48-piece orchestra in the studio with us recording these great songs.”

George added: “We do a mix of stuff – not just Irish songs. If you listen to some of the bands now they’re going back on the old stuff. To me, you can’t beat the real thing.”

Unlike some older musicians and music fans, The Fureys are not consumed with thoughts of past ‘glory days’. On the contrary, George admits that music is “probably more versatile now”.

Instead the past only serves to make their current concerts more fulfilling as they bring together people who have followed them through the generations.

“A lot of the kids that come to see us now, their grandparents or parents would’ve come to our concerts and bought our albums,” George said.

“Now we have kids coming to concerts with their grandma and grandpa.”

Eddie noted: “People grew up with our stuff and they love to see it live.”

The Fureys have united generations and their music has been played everywhere from their hometown in Dublin to the International Space Station – where astronaut Chris Hadfield famously played their track ‘Steal Away’ – but of all other places outside of their hometown, it’s in Belfast where they feel most at home.

“We’ve been up here so many times it’s like our second home,” George insisted.

“We used to play in the Ulster Hall before this was built. We used to bring the wives up to do the Christmas shopping, because it was cheaper up here. Then we’d smuggle it across the border. If you got caught at customs they’d take it off you – drink and everything – party time. We had some parties like.”

He continued: “This is our tenth gig here, which I never knew until this morning. It was only opened up when we first played here. They know what to expect – people are used to coming to see us. They always ask for some of the old songs, and we have to do them. People will ask for some different songs too, and we can do them no problem.”

Eddie added: “We’ll be singing some songs off the new album too. You have to add them in here and there. If a request comes up for an old song we like to keep people happy.”

The Furey’s play at the Waterfront Hall on January 19, 2019. For tickets, see: waterfront.co.uk/what-s-on