The train, the pub, the match: it’s All-Ireland day again 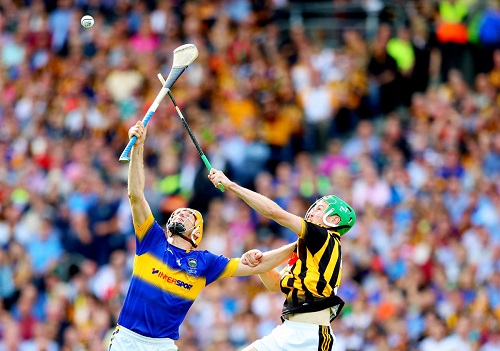 BILLY Gillen was impatient. You see, it was the day of the All Ireland hurling final and Billy, as usual, had a ticket for the match. Having arrived at Central Station at 8.30am he found there was a queue stretching out to the street. One of the ticket booths was unmanned and one of the two ticket attendants seemed to be conducting a go-slow campaign. When Billy reached the platform there were two trains bound for Dublin, one on each side of the platform.

Billy asked one of the uniformed officials which train was departing first. With great gravitas (it was obvious he wasn’t a Kilkenny supporter) the NIR employee declared that he wasn’t sure. We boarded the train on the right and watched the other train take off a few minutes later with our NIR spokesman aboard. To put it mildly, Billy wasn’t too pleased and it was fortunate the NIR man was nowhere to be seen when we reached Dublin.

However, Billy wasn’t going to allow this to spoil his day – and what a day it was. All Ireland hurling final day has to be the best day of the year. You just don’t know what to expect as the capital takes on a carnival atmosphere and the men from the country take over.

Billy led us into the pub an hour before opening time (he has matters like that well sussed out). Just as we entered a man said hello to me and I had to study him for a second or two before I recognised him. It was Vivian Lavery from An Port Mór (better known to people of Tandragee and those fluent in Ulster-Scots as Blackwatertown). Vivian and I were at school together. His father, Barney, was one of the best known and best-liked people in the parish. He was an entertainer who took part in plays and sketches devised by himself. I can remember being enthralled when he appeared on stage, his face made up, wearing a blonde wig and his wife’s clothes singing ‘Biddy Mulligan the Pride of the Coombe’ while he smoked a cigarette. It was only the next day I realised it was him. On another occasion he led a torchlight procession commemorating the Manchester Martyrs through the streets of Armagh city, dressed as Robert Emmet. Sadly, Barney was killed in an explosion in 1988 aged just 67.

Significance
Vivian takes after his father and has appeared on stage a few times too. This was his first hurling final and he was in great form. When his friend learned from Billy that we came from North Belfast he told us a few stories about the time he worked in Mallusk in an auction house. He was the only man in the firm who knew the significance of an O’Neills football. Vivian told us then about the unlikely connection between Blackwatertown and North Belfast. In 1999 Armagh’s senior footballers were Ulster champions. The village was bedecked with flags and bunting. Vivian was working as a barman in the local pub. He told us that on the Tuesday after the Ulster final (Armagh had beaten Down) the door opened and in walked a group of people. A man approached Vivian and asked where the boss was. A voice behind him said, “You’re talking to him.” This was Peter the proprietor. The man introduced the only woman in the party as Baroness Blood of Blackwatertown. May Blood from the Shankill district had been made a life peeress the previous week and was paying her first (and probably last) visit to Blackwatertown. Quick as a flash, Vivian assured her that they had heard about her and related how the locals spent the weekend decorating the village, putting up the bunting and flags in expectation of her arrival. One of the men in the party told Vivien that they were the right colour. Vivian readily agreed, knowing that the man obviously didn’t know that Armagh played in orange and white.

Billy led the way to Croke Park. We passed the Brendan Behan (the Sunset Bar was renamed after a gang feud murder took place there some months ago).

Billy wondered what Brendan Behan would have made of the day. Vivian told him he would not have been too impressed. Behan referred to non-residents of the capital as bogmen. When Behan lived in the northside of Dublin the representatives of authority, the teacher and the Garda, were almost always countrymen. He once told an audience in Jerry O’Dwyer’s pub in Moore Street of his horror of country people. Not only that, but he declared that country people in the north are the worst. “There are two types of north of Ireland people,” he said, “the Protestants and the Catholics. The Protestants are all right. Up where they are, they’ve grabbed everything. So they stay at home and don’t annoy you. But the north of Ireland Catholics, they have to go somewhere, and a lot of them come to Dublin and they’d lift the sausage off your plate.”

The hurling match was a treat. It was a sensational performance from Tipperary in the second half. John ‘Bubbles’ O’Dwyer and Seamus Callanan led the Cats a merry dance. Billy was ecstatic, for he has been prophesying this since Tipp destroyed Waterford in the Munster final.

Back in Connolly Station Billy saw the helpful NIR man, who retreated on to the train on the left when he saw Billy coming his way. “I wonder what Brendan Behan might have thought of him,” Billy muttered as he took the train on his right. He had backed a winner this time – the train pulled out at 7pm. As always on All Ireland day, the trip home is short with Gaels from all parts of the north and the sing-song non-stop.