JUDE COLLINS: There’s just no such thing as a good Brexit deal 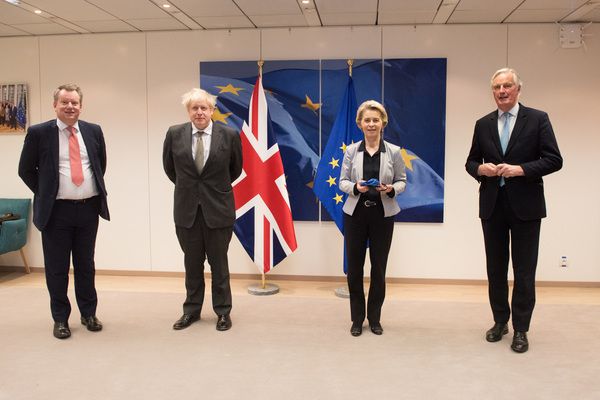 WHEN I was a child, we used argue which would be worst – to be deaf, dumb OR blind? A few minutes’ discussion always led us to see being deaf as a relatively mild condition, when compared with being dumb. But blind: that must be terrible altogether.

Those childish rankings came to mind over last weekend when I heard that Ursula von der Leyen and Boris Johnson had decided to scrap the Sunday deadline to keep the Brexit talks going. This news must have caused an awful lot of people in Britain and Ireland to unclench their teeth. Post-Brexit with a UK-EU deal will be ghastly, but compared to post-Brexit without a UK-EU deal, it’s cheerful news.

Add the fact that the border-in-Ireland threat has been withdrawn, and there’s even a temptation to break into a small victory dance. My considered advice: don’t. Those scary lines of trucks backed up ten miles: five miles may be better, but only compared to ten. Compared to none backed up,  five is awful.

In this final stretch of talks, transparency & unity are important as ever: Debriefed @Europarl_EN Conference of Presidents this morning on 🇪🇺🇬🇧 negotiations.

The main sticking-point now is measures to ensure that UK-EU trade is fair – the level playing-field. If a trade deal is signed and Britain – or, less likely, the EU – starts having an advantage because they’ve binned workers’ rights or ignored environmental rules, there needs to be something in place that halts that decline in standards and/or adjusts the trade arrangements to match that decline.

This brings out the uber-Brit in Johnson, who likes to talk of EU plans to ‘punish’ Britain. How  dare they infringe on our sovereignty? Send in the gunboats, chaps. This dumb display of British might is actually aimed at fishing rights, not a trade deal, but it allows the blond buffoon to strike a pose that resonates with all those English people who think the world’s gone to the dogs since England lost its Empire.

Johnson may whirl his arms and talk about casting off EU shackles, but the fact remains:  the EU is by far the UK’s largest trading partner. You may be sure that post-Brexit, however served, will make UK-EU trade vastly more complicated and, for some, impossible.  And if trade is hampered, the increased costs will be passed on to the consumer.

The other stumbling block, we’re told, is fisheries. We hear much about foreign trawlers in British waters, but rather less about what British fishermen do with their catches. At the moment, Britain exports 80% of its fish catch, and most of that goes to EU countries. Selling their fish, post-Brexit, could be a major headache for British fishermen.

What about China or maybe India – wouldn’t  deals with those huge markets make up for the loss of EU membership? Maybe, but probably not, and for one very good reason: they’re far away. And the further away a country is from Britain, the harder it is  for British business to make profitable deals. This inconvenient truth is masked by PM Johnson’s bluster about the wonders of Brexit  and how Britain will set sail into the future,  but a moment’s though removes the mask.

And if we dare peep at a no-deal through our fingers, we’ll find that some 90%  of UK goods exported to the EU will face tariffs.  The average external tariff which the EU levies on non-EU countries is 4%. Looked at one way, that may seem peanuts; but think of the rude words you’d say if 4% was deducted from your salary, and how overjoyed you’d be if 4% were added.

A hard border in Ireland, buíochas le Dia, is no longer a point of dispute. But there are other Ireland-Britain problems.

And no, no, sorry Virginia. It’s pointless complaining that the British people should never have performed this act of self-harm: of course they shouldn’t, but they did. What we’re left with is the collateral consequences.

As I type it looks as though a UK-EU deal of some sort will be cobbled together. But it’ll still be piles-painful for all concerned. Economically, there is no such thing as a good Brexit. Politically, of course, from an Irish point of view, Brexit could be a giant plus. Ach sin scéal eile.