Thomas has been behind the lens for 21 years 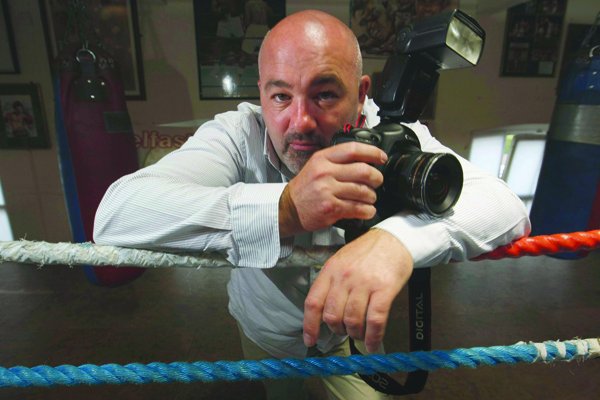 TO many people in North Belfast Thomas McMullan is a familiar face in the local community.
A multiple award-winning photographer, Thomas has been the man behind the camera for 21 years ever since the North Belfast News started publication in 1998.
Hailing from Chatham Street in old Ardoyne, Thomas was born in 1969 in the Mater Hospital on the Crumlin Road and came from a family of three brothers. He attended Holy Cross Boys Primary School in the district and is also a past pupil of the old St Gabriel’s school.
Leaving school at 16, Thomas admits that the academic world was not for him and he left home soon after to work in England.
“School just wasn’t for me,” he explained.
“I wasn’t academic but always fascinated by art and photos in newspapers and magazines such as The Observer and Sunday Times magazines.
“I left home at 18 and went to England. There wasn’t much work here at the time and I just wanted to get away from Belfast with all the conflict going on.
“I saw so much trouble and bloodshed on the streets. My community was under siege.
“You couldn’t get in or out of Ardoyne without getting checked by British Army or RUC.
“I was away for a year and worked in construction on building sites in London. I decided to come back because to be honest, I missed the place.
“I didn’t really like London at all. It was far too quiet compared to back home.”
Thomas returned to Belfast and turned his attention back to one of his hobbies and interests he had from a young age – photography.
“I wanted to pursue a career in photography,” he added.
“I went to night school where I learnt the basics but I wanted a job so I could work for the community using photography.
“I managed to get an interview with the founder of Andersonstown News in West Belfast, Basil McLaughlin and Máirtín Ó Muilleoir who told me they were starting a new newspaper for North Belfast.
“I was familiar with the Andersonstown News and liked the fact that they provided a voice for the community in West Belfast during the Troubles.
“My interview was 21 years ago and I haven’t looked back since.”
In 21 years, Thomas has established himself as a well-known and talented photographer and there wouldn’t be many in North Belfast who haven’t recognised him out and about doing the job he loves.
Still, much has changed over the years in North Belfast and in photography.
“North Belfast has changed in some ways but many issues remain today like housing and the unfair points system.
“Community relations have improved with integrated education but even today, there are still sectarian attacks and peace walls remain up dividing communities.
“There are still people out there fighting for peace.
“As for photography, I started off developing my own black and white images before it moved on to the digital age which takes up a lot less time and I can produce more photos.”
Thomas has enjoyed many successes over the years and in 2018, showcased 20 years of his work in the local media at an exhibition for Féile an Phobail.
Back in May of this year, he scooped four awards at the Northern Ireland Press Photographers Awards, including first place in the Individual Study and Sports Action categories along with a Provincial Merit Award. He has been recognised multiple times over the years in the awards.
“It is great to be recognised for the daily work that I do. It is great for the North Belfast News and Belfast Media Group to show we put our best efforts into the product.
“It was a proud moment for me and the paper.”
Away from his daily working life, Thomas may also be seen on his motorcycle on the road and he also enjoys music. Thomas is also a busy grandad to two grandchildren and has three children – two daughters and a son.
Asked for any advice for any budding photographers out there, Thomas would encourage them to join a camera club – the long-running CB Camera Club on the Antrim Road who meet every Thursday night at 8pm.
As for the future, Thomas concluded, “I am content with the job I do now – representing people in the local community.
“I am proud of where I am from. I want to see all young people succeed in what they are doing.”