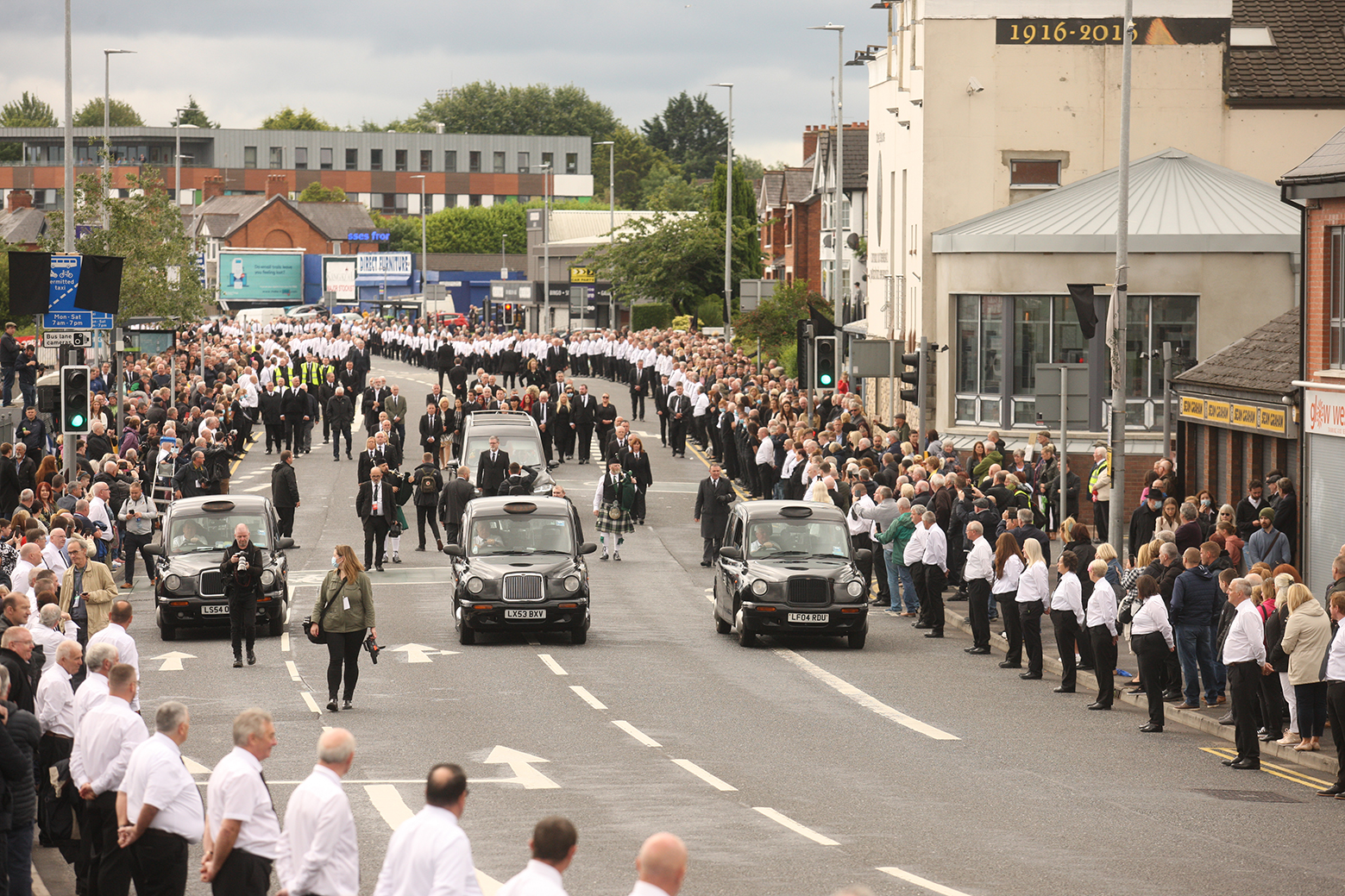 Thousands of people have gathered in West Belfast for the funeral of veteran republican Bobby Storey.

The 64-year-old, who died last week, was laid to rest following Requiem Mass at St. Agnes Church in Andersonstown.

Mourners could be seen congregating gathering near Mr Storey’s Owenvarragh Park home by as early 9am, with up to 500 gathered an hour before the 11am funeral mass.

The Police, having made a number of brief preliminary searches of the area, kept a low-key presence throughout. A sizeable team of volunteer stewards were also in place to manage the crowd and soon closed the Andersonstown Road to traffic.

As Mr Storey’s body was taken from his home, senior republican Seán Murray and Sinn Féin MLA Gerry Kelly draped a tricolour over his coffin.

A small procession made up of Mr Storey’s relatives, close friends, and a number of high-profile political representatives followed the hearse as it made the short journey to the church. The cortege, led by a pair of pipers and three West Belfast Black Taxis, was flanked by republican ex-republican prisoners including Foyle MLA Martina Anderson.

Finance Minister Conor Murphy, Donegal TD Pearse Doherty, and the family of the late Martin McGuinness were also in attendance.

The funeral of Óglach Bobby Storey leaves his home in Andersonstown. A republican leader and visionary. RIP. pic.twitter.com/CLoLeQAeSJ

In his homily, Fr Gary Donegan described how Mr Storey, who was born in north Belfast in 1956, was raised during “a time when communities were under threat and the army were constantly patrolling the streets" and his family “were intimidated from their home and spent several days sheltering in Girdwood Army Barracks".

Having joined the IRA in 1972, Bobby dedicated his life to the republican struggle, spending over 20 years in prison.

He was a key leader of the famed 1983 Great Escape by 38 IRA prisoners and in later years travelled Ireland with fellow-escapee Gerry Kelly to take part in talks on the breakout.

As well a being a leading figure in the IRA, Mr Storey went on to become chairman of Sinn Féin the Six Counties.

During Requiem Mass, Fr Donegan described him as a devoted partner to Teresa with a “gift of humour extended to all he met”.

“Rarely would you be in his presence, even in moments of extreme tension, without him making you laugh,” he said.

“It’s hard to credit that Bobby was on first name terms with the lady behind the face cream counter at Debenhams. There aren’t too many men here today who can say that.”

Fr Donegan told how Mr Storey’s 30-year relationship with Teresa “began to develop from the time of Bobby’s first parole in 1989”.

He said Teresa “spoke of Bobby the family man and the great love he had for his sister Geraldine and brothers Seamus and Brian”.

“She told us of the great mutual love shared between Bobby and her sons Emmett, Fergal and Sean,” he said.

“Over the years his character rubbed off onto them and Bobby played his part in making them the men they are today. Bobby was a natural with children.

“He came alive when he was with them. When it came to grandchildren, he took centre-stage. Teresa could cook and clean for them all day but when ‘Granda Bobby’ appeared she was shoved to one side and he became the centre of attention.

“He never forgot the birthdays of the grandchildren and his godchildren.”

Mr Storey’s funeral cortege was met with applause as it left the church.

A guard of honour made up of republicans from across the island of Ireland, who lined the entire route to Milltown Cemetery, then filed in to form a larger procession made all the more ceremonious by the limits imposed by social distancing.

Bobby Storey was buried in the republican plot at Milltown Cemetery where Gerry Adams delivered the eulogy.