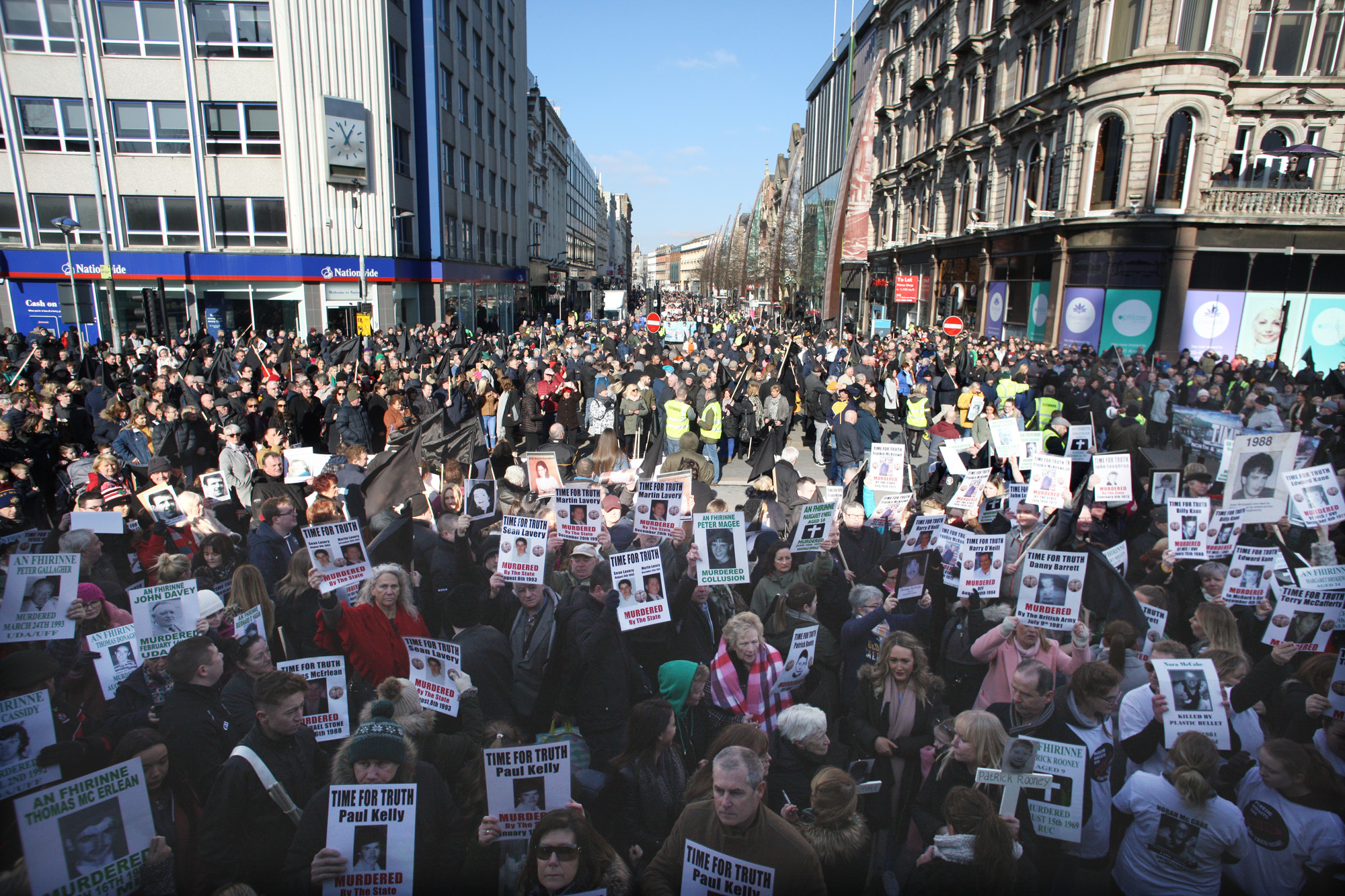 Thousands march on the streets of Belfast yesterday

THOUSANDS of people marched to Belfast City Hall yesterday to support the Time for truth campaign, which is calling for political action in dealing with legacy issues.

Speaking at the march Michelle O’Neill, Sinn Féin’s leader in the north, assured those gathered that funding would still be forthcoming despite the collapse of the talks.

Addressing the large crowd Briege Voyle said: “My mother, Joan Connolly, was murdered during the massacre of 11 people by the British Parachute regiment in Ballymurphy between the 9th and 11th August 1971.

“She was a wife, a mother of eight children and grandchildren.
She was 44 years old. She is my hero, but instead of being remembered as a hero she has been labelled a gunwoman.

“My mammy went to the aid of a young man who had already been shot in the back then she was shot and how personal could they get when they shot my mammy on a bright summers night, they blew the side of her face off and blinded her right away and left her to lie in that field for at least four to five hours afterwards as she bleed to death.

She added: “The British government and the media branded our loved ones as gunmen and gunwomen like those murdered on Bloody Sunday.
“We now know It was the same parachute regiment that killed our loved ones in the streets of Ballymurphy and Derry also on the Shankill road in 1972.

“It makes me so angry that we have to take to the streets to get the truth. But that’s why we are here today, and I want to thank all of you for walking with me and making our voices heard.”

Sinn Féin MLA Gerry Kelly called on the British government to release funding for legacy inquests and begin the consultation on the legacy structures agreed at Stormont House.
He said:“Today thousands of people stood in support of the families and victims, some of whom have been waiting over forty five years for truth and justice.
“This issue is not going away.
“The British government have a responsibility to start the consultation on the legacy mechanisms agreed at Stormont House more than three years ago and release the money necessary to the Lord Chief Justice to deal with the backlog of legacy inquests. After all the Lord Chief Justice stands outside of politics and is tasked simply with running the courts.
“It is unacceptable that some families have waited more than four decades for this most basic of human rights, the British government should move immediately to bring their suffering to an end.”
Also addressing the crowd were representatives of the Sean Grahams bookies massacre, Bloody Sunday, Loughinisland, McGurk’s Bar, Kelly’s Bar and Ballymurphy Massacre families.
John Teggart, one of the march organisers and spokesperson for the Ballymurphy Massacare families, said: “Yesterday was a very emotional day for everyone involved.
“Standing on the stage and looking out at the that sea of faces holding photos of their loved ones was heart-wrenching, it’s a sight I will never forget.”