Truth behind double killings is uncovered 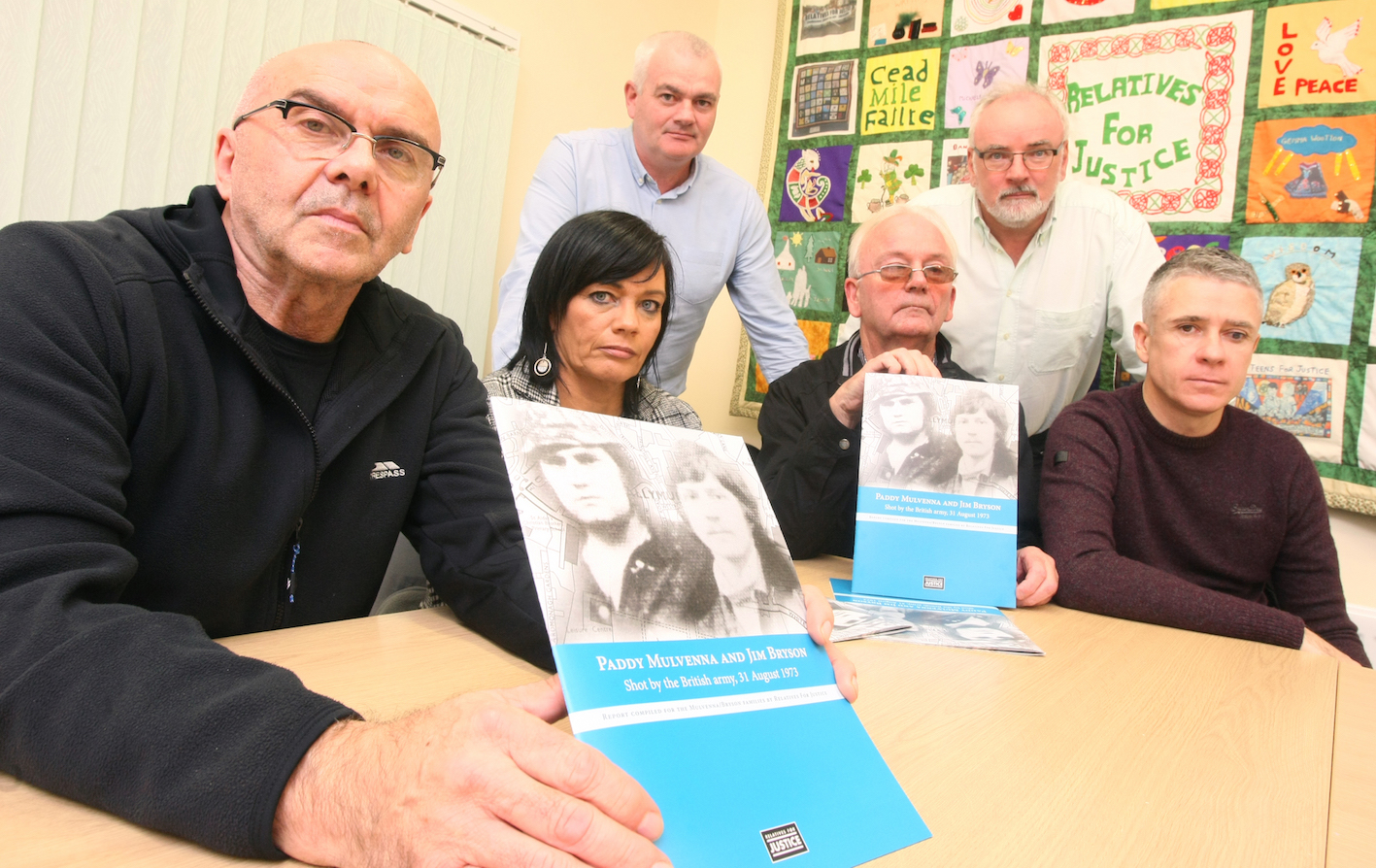 AN in-depth report will be launched this week into the controversial killings of IRA volunteers Jim Bryson and Patrick Mulvenna. Compiled and researched by victims’ support group Relatives for Justice (RFJ) on behalf of the two men’s families, the report is a full account of available information as to what happened to their loved ones.
The shooting of the two IRA men took place in Ballymurphy on August 31, 1973. The Official IRA initially claimed they were responsible – but since then have denied any involvement. It is now widely accepted that both men were killed by an undercover unit of the British army. 19-year-old Patrick Mulvenna died instantly in the attack. Jim Bryson, aged 25, died from his injuries three weeks later on September 22.
Patrick Mulvenna’s son, also called Patrick, was born on the first anniversary of his father and mother Frances’ wedding nine weeks after his father had been shot dead. Patrick spoke of how the families had previously engaged with the now defunct Historical Enquiries Team (HET) in their quest for truth and justice but that it had “raised more questions than answers.”
“Myself and Jim’s nephew Bill McComb started our own research into the killings and this report is to be welcomed. We have since found out that the soldier or soldiers responsible – and who we know by name and who were in the Royal Green Jackets – were awarded medals for what they done, that they went on to train other units throughout the world.
“From our end of things Jim and my father were IRA volunteers and we are proud of that. People have this thing, and rightly so, of ‘well, they were in the IRA, big boys games, big boys rules’. There was a war going on. The car that my father and Jim were travelling in that day could’ve been stopped, the shots weren’t fired at them until it came to a standstill. The British army was here to protect, rightly or wrongly, people got caught up in the conflict.”
An emotional Frank Duffy who was travelling with Jim and Patrick that day spoke of how the British army “took advantage” of the situation at the time.
“I was sitting in the rear driver seat, it was still daylight and we were leaving the area. I just remember being covered in blood, but it wasn’t my blood. I think the army needed a morale booster at that time and took advantage.
“I am happy with the report as I think it’s overdue.”
Jim Bryson’s nephew Bill McComb told the Andersonstown News that he believes the report “is as close to the truth as we are ever going to get”.
“It’s long overdue. There is still a whole raft of information that we don’t have access to, radio reports from that day for example. The particular narrative that has been set out by the Brits from the day has been a narrative of lies, it’s that that we want to challenge and have been for many years.”
Speaking on behalf of RFJ, caseworker Paul Butler said the organisation along with the families take the view that “Paddy and Jim were victims of a shoot-to-kill policy carried out by the British state”.
“The evidence contained in the report supports this view and includes British army impunity against potential court proceedings, two occasions when the British army thought they had shot Jim on previous occasions and the fact that both Paddy and Jim had been shot in a car that was moving away from the shooter who was in a covert observation post. The shooting was in contravention of, at the time, ‘Yellow Card’ procedures.
“The families and RFJ are aware of the identity of the soldier who fired the shots, who was serving in the Royal Green Jackets and was decorated for his actions.
“The families and RFJ have issues with subsequent ‘light touch’ investigations carried out by the Royal Military Police, an inquest and an Historical Enquiries Team (HET) report. All these so-called investigations were deeply flawed and got nowhere near the truth.
“The families and RFJ are seeking accountability and legal redress from the British state and Ministry of Defence for their loss. There was never a proper independent investigation into Jim and Patrick’s killings. They want to know the truth about what happened to Paddy and Jim rather than the constructed false narrative that was and is promoted by elements of the British state. The families deserve no less.”
The RFJ report will be launched on Friday at Gort na Mona CLG on Friday November 30 at 7.30pm.