Ulster Elite Boxing Finals: McGivern keeps it in the family with victory on a big night at Girdwood 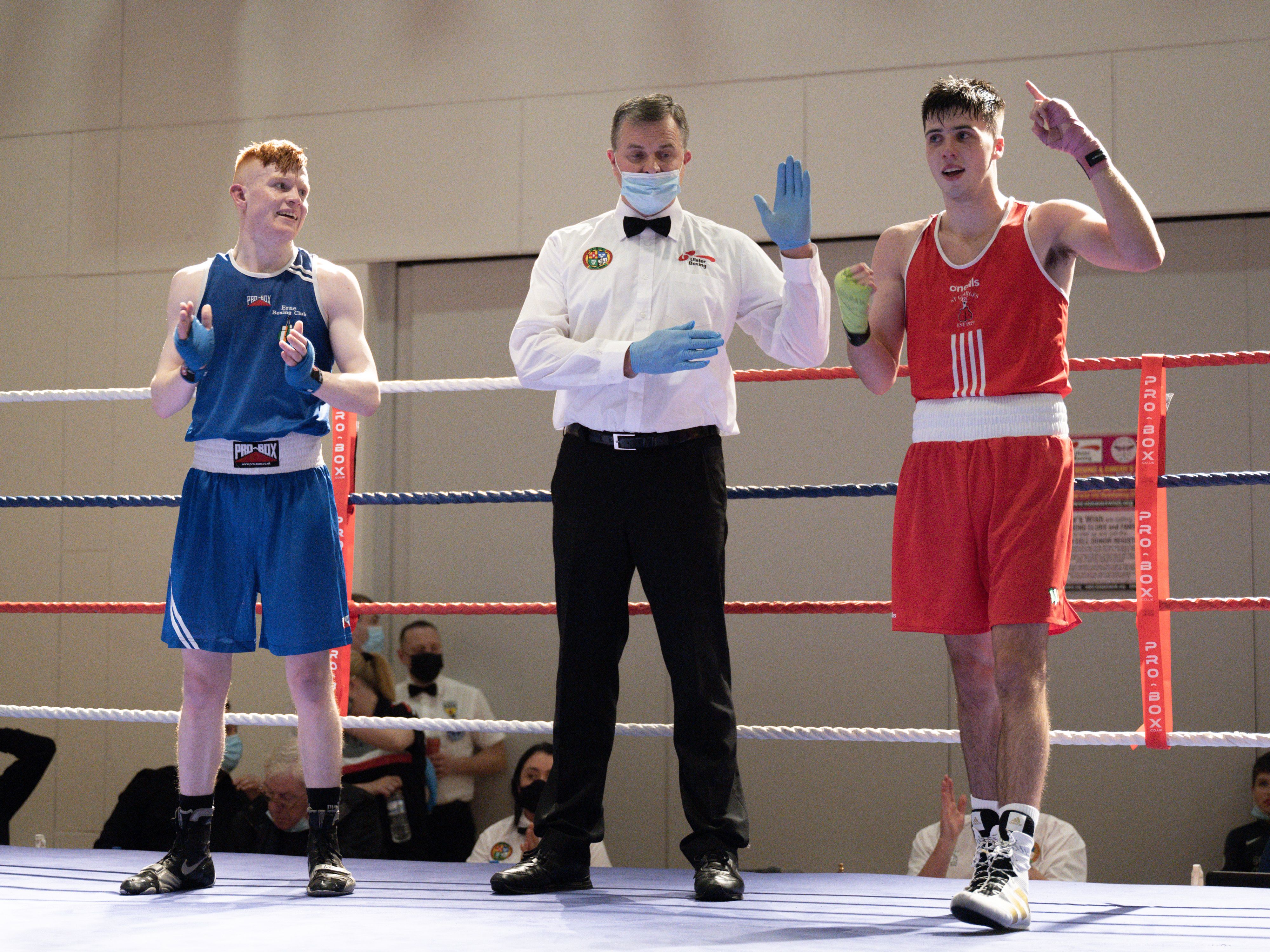 JACK McGivern emulated older brother, James as he out-boxed Erne's Anthony Malanaphy to bring the U'pritchard Cup back to the family and the St George's club with a unanimous victory in the Ulster Elite Boxing light-welterweight final at Girdwood Community Hub on Thursday night.

McGivern had a long road to the title having boxed three nights in-a-row, but put past disappointments behind him to get over the line on this occasion.

The St George's man just got the better of the exchanges in the opener and while the Fermanagh man continued to press in the second, the classier work was coming from McGivern who was picking his rival off with the left.

Knowing he held the advantage, it was a case of seeing it through in the final frame and he did so to take the verdict.

"I knew after last year I wasn't going to make the same mistake again and even if he had a sledgehammer, I wasn't going to get beat," said the Lower Ormeau man, who lost out in the 2020 semi-final to Dominic Bradley.

"I wasn't even going to enter as I had a chest infection, but I boxed three days and the show must go on.

"I was running about the house last night (Wednesday after the semi-final) covered in Deep Heat and woke up stiff as a board, but I had to get through it as this is all part of the build-up to the Commonwealth Games where you can box every day, so it's great to have that experience.

"I think there is a camp in America in January, so the hard work starts here and I'll just get back into the gym in a few days."

It was also a big night for Emerald's Gerard French who won his first Ulster Elite title, but had to come through a scare to get the nod over Rory Kinney in the light-heavyweight final.

French had come up short in past finals at lower weights and had even signalled he was set for a move to the professional code at the beginning of the year, but after an enforced absence, returned to the vest and the decision paid off as he opened this final well, forcing the pace but was unable to get to the Scorpion man as clean as he would have liked.

Still, he took the first round but seemed to tire a little in the second as both were winging huge shots with many off target, but the better work was coming from the West Belfast man.

French was unhappy with what he thought was constant rabbit punching but could have no complaints when issued a standing count late in the round when tagged and stunned with a right, but saw out the fight to claim a 4-1 win.

"To be honest, I expected that as it's my first fight in two years," he said.

"I was chasing the big shots a bit, but this is my first fight at light-heavy so I'm just getting used to it. He was a big lad and I was feeling it a bit.

"At the start of the year, I had plans to turn over (to the pros) but I got injured and that took me out of boxing for a while. I had a broken hand and when I came back, I just went back to the club and these were coming up, so I thought why not?

"I still have plans to turn pro over the next two years anyway, but I'll see what's happening with amateur boxing and the Commonwealths are coming up so there may be box-offs for that."

It wasn't a thriller in the 71kg decider, but John Boyd did enough to frustrate Emeka Onwuka from All Saints to nab a 3-2 win.

The Gleann man was on the back foot throughout, giving Onwuka little to aim at as he was left swinging at fresh air and the West Belfast man was doing just enough to nick rounds and have his hand raised.

"I didn't really get hit much, but that's all down to the lads in the gym. I listen to what they say and do it.

"He came out like a bulldozer in the second round but I listened to the boys and stayed out of danger. I've only turned 21 so next I'll be looking at the (Irish) U22s."

A return to the Commonwealth Games remains on course for Carly McNaul as she claimed the women's flyweight title.

McNaul, who claimed silver at the Gold Coast in 2018, had been out of the ring since losing an Olympic qualifier in March 2020 with injuries and a bout of Covid leaving her in doubt as to whether she would be back in the ring.

However, back she is and a controlled display saw her score a unanimous decision victory over Holy Family's Sionnan McKenna as she showed patience at times and then went through the gears at others to claim a unanimous win.

"I broke my femer, had an operation on my eye and then had Covid so it's just good to get back in," she said after.

"Covid was really hard to get over. I just drained me and at one points I thought 'I'm never going to get my fitness back' and it took until two months ago.

"I felt very relaxed in there. I've been working on a lot of things because I'm a really emotional fighter just charging in, so I took my time and it all fell into place. I just feel like I'm back and ready for what's next to come."

Immaculata's Nicole Meli was also celebrating on her return having been away for six years as she claimed the women's 54kg title with a dominant 5-0 win over Clodagh McComiskey from Gilford.

"I'm very delighted as I had been out for six years and got the job done," said the 'Mac Girl'.

"I came back two years ago at 82 kilos and didn't think I was going to be here today, but I have to thank the Immaculata coaches and boxers for helping me get there.

"I've had a lot of family things going on and this one is for my granda. I didn't think I would do it this year, but I'm glad I did come back.

"I hope my name is in the conversation (for the Commonwealth Games) but I understand that I've been out for six years and it may not be, but I've proven after six years I'm back and here to stay."

Emerald's Dominic Bradley put past disappointments behind him to claim the lightweight title.

The Swatragh native got through on a 4-1 split decision after a thrilling battle against Holy Family's Rory Lavery who looked to have momentum after the second round, but Bradley found the answer, sending him to the canvas in the third and showing his class to outbox his rival to claim a deserved victory.

"It was just that wee bit of class when it was getting a bit scrappy, but JP (Delaney) in the corner said it's about finding that one per cent to get over the line," said an emotional Bradley after.

"There were days I didn't find it but it was back to that line: finding calm in the heat of battle. That's two Irish Elite finals I've lost out on, an Ulster Elite final, so it just goes to show you that after three years' work being the man in the other corner, it's tears of happiness today instead of tears of sadness."

Bradley grew into the opening round after a cagey start, landing a solid right to underline his dominance.

Lavery upped the pace in the second and two hard lefts seemed to tip the scale his way as he finished the round on top, but Bradley's looping right early in the final round regained momentum.

With Lavery forced to go for broke, Bradley could step back and his uppercut came into play as he claimed victory.

The men's light-flyweight final was between boxers from two different St John Bosco clubs, but it was Ricky Nesbitt from the Newry version who got the better of Belfast's Padraig Downey, impressing all five judges for a rather generous unanimous win.

It was certainly a much closer contest as while Nesbitt enjoyed a fine opener, consistently catching Downey on the way out of exchanges, the Belfast man had a much better second, landing with two rapid combinations to the head that seemed to turn the tide.

It appeared all to play for in the final stanza, but Nesbitt shaded it as his work was a little cleaner as he took the title.

Cookstown's Craig Biggar was celebrating success at 52kg as he defeated Letterkenny's Paddy McShane on a 3-2 split, while a high-class 57kg final went the way of Jude Gallagher from Two Castles who edged out Monkstown's Conor Kerr on a 3-2 split.

Eugene McKeever completed a three in-a-row as he retained the welterweight title with a commanding win over Holy Family's Cathal Jennings, while Emerald's Jake Tucker came through a thrilling battle against Lex Weston from Ardoyne Holy Cross to edge the 75kg final 3-2.

At heavyweight, Monkstown's Charlie Boyle proved too big and strong as he took what Stephen McMullan from Newington Patsy Quinn had to throw at him to secure a 5-0 win with a polished display and in the final bout of the night at super-heavyweight, Cavan's Thomas Maughan edged home 3-2 against Carrickmore's Aaron Travers.

The opening fight of the night was the women's 48kg final where Antrim's Nicole Clyde just had too much quality for Canal's Chloe Fleck, while Amy Broadhurst took the women's lightweight title as she stopped Christine Gargan in the second.