JUDE COLLINS: Ulster’s ulcer flares up at US delegation arrives 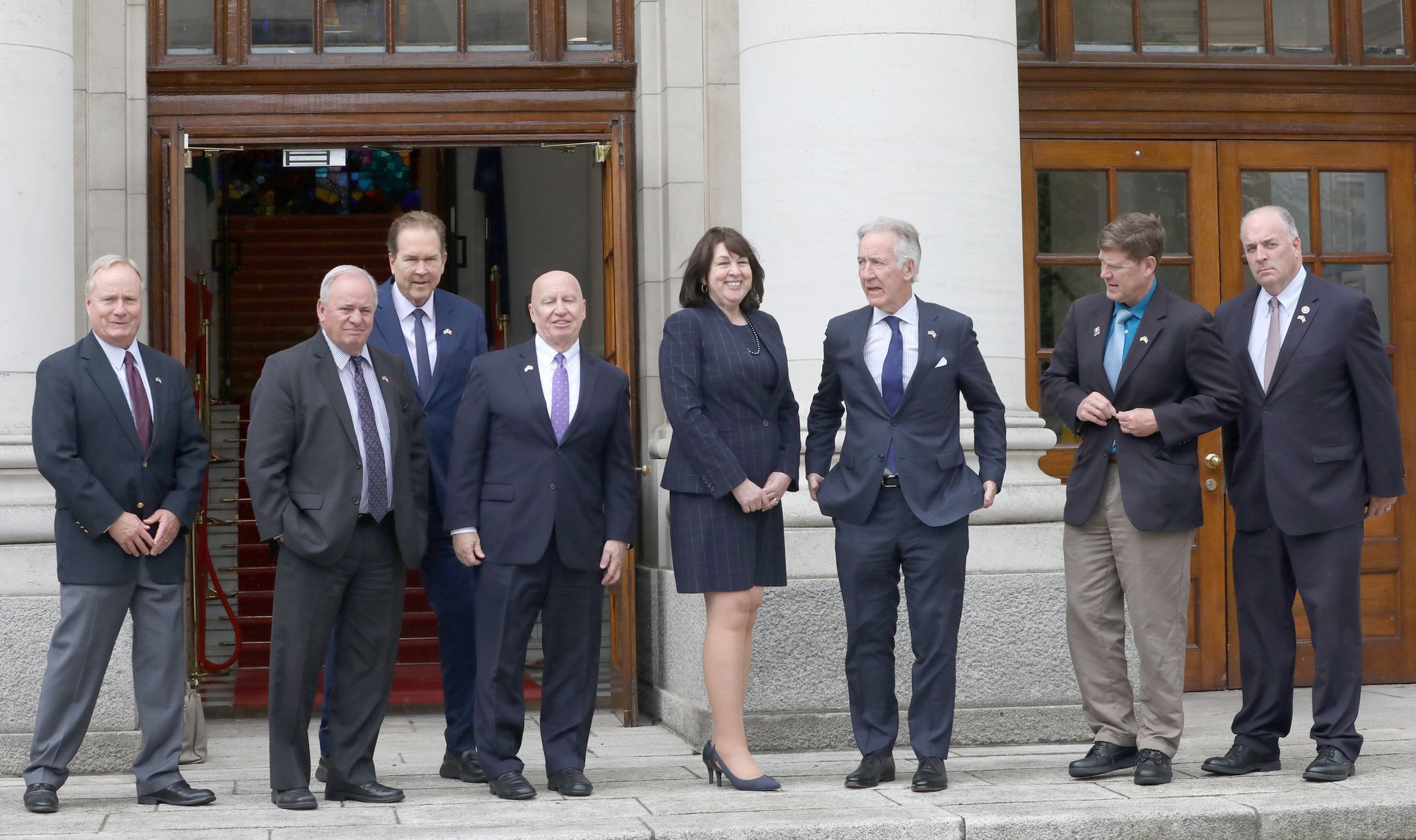 IN TOWN: The US delegation led by Richie Neal, third right, arrives in Dublin this week

IN this uncertain world, there are some certainties we can cling to: day follows night, holy water fonts in Orange Lodges are rare, and the DUP’s duodenal ulcer acts up when there is US intervention in the affairs of NEI.

The last of these certainties is because the DUP and Britain for several decades insisted that our Troubles were an internal matter, nothing to do with other countries. Especially that big one on the other side of the Atlantic. But then came Senator George Mitchell and the tortuous trail to Good Friday 1998. Like it or lump it, the US was centrally involved.

Which brings us to that pesky outsider Richie Neal, Chairman of the Congrresional  Ways and Means Committee.  In an interview I did with him in Washington in 2018, he said: “We are a guarantor of the Good Friday Agreement. It is our Agreement too. The American dimension is what made it possible to resolve that long-standing dispute”.

And now, four years later, here is Neal again, speaking in Kerry last Sunday: “The Good Friday Agreement has worked, and it has worked quite well. We don’t want to see it disturbed.”

If Richie Neal believes that distorting the truth about election results & ignoring the totality of unionist opposition to the protocol will safeguard the Belfast/Good Friday Agreement then he merely exposes his own ignorance & prejudice and slavish adherence to Sinn Fein dogma. https://t.co/7pVIvHOJvS

And what has brought Richie Neal and the nine-strong US delegation to our shores? Well, the actions of the Tory Party’s Foreign Secretary Liz Truss is part of it. Ms Truss is busy bringing forward legislation that will tear great strips out of the protocol, a key part of the Withdrawal Bill. She knows that this breach of an international agreement with the EU could have far-reaching consequences. But following the example of her master, she has presented this as being her way of saving the Good Friday Agreement. So what Richie Neal and his colleagues see as a threat to the stability of the GFA, Ms Truss sees – or says she sees – as a vital support  for the Good Friday Agreement. Hence her tweet on Sunday last:

“We [British government and US delegation] discussed our cast-iron commitment to the Belfast (Good Friday) Agreement.” It’s like a driver doing 90 mph and shouting over his shoulder to passengers that this is good for their safety, since it will get them to their destination quicker.

Leader of the Alliance Party Naomi Long in an interview with Sky television said that Britain is using NEI as a pawn in the chess-game with the EU. Like her boss, Boris Johnson, Truss has no interest or knowledge of here, beyond how it can be played as Britain asserting itself in the teeth of the bullying EU. And, given that Johnson is her boss, she’s showing that anything he can do she can do better.

If Truss’s claim to be giving 100 per cent support to the GFA is true, then Neal and Co have just taken a 2,000-mile journey for nothing. But of course Neal and Co know it’s not true: if the Labour Party in Blair’s time didn’t do God, the Tory Party in Johnson’s time don’t do truth.

So what now? Actions speak louder than words, as the leader of the DUP made clear. Fortunately for the DUP, the changes in the law around the protocol will not take effect until a year at the earliest. So as things stand, the good knight Jeffrey can stay out of Stormont and avoid the terrible humiliation of having to serve alongside (he’d see it as under) First Minister Michelle O’Neill.

Let me spell it out, Sir Jeffrey. You must try to protect yourself from two dangers: the jocular lies coming from  the prime minister in No 10 and the stupid assertions coming out of Foreign Secretary Truss.