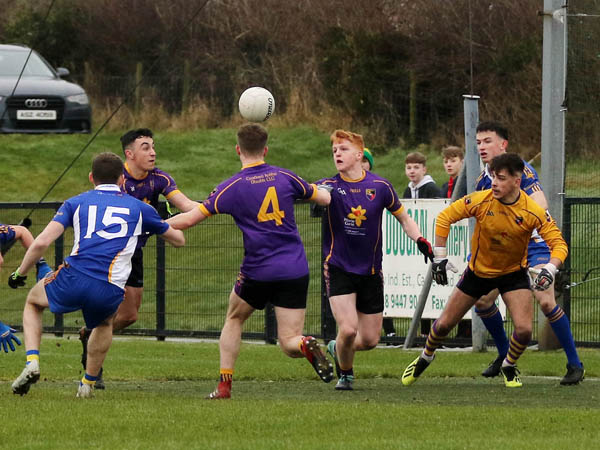 DANIEL Guinness was the toast of Carryduff on Sunday as his late point sent his side through to the final of the Ulster U21 Club Football Tournament at Creggan at the expense of South Belfast neighbours St Brigid's.
This unique local derby between the champions of Antrim and Down lived up to the pre-match hype as the teams served up a thrilling game with some fine scores and plenty of drama with the result in doubt right up until the last kick of the ball when Rory Brolly's late effort from distance sailed wide as he tried to find an equaliser for the Malone club.
In the end, Carryduff probably just about deserved their win as they were a little better in front of the posts with Ronan Beatty notching six points and having a hand in others to take the man-of-the-match award, while Owen McCabe was also in top form for the Down side.
St Brigid's had big games from Patrick Finnegan and Peter Webb, but they just found their scores a little harder to come by, although they certainly couldn't be faulted for effort as they stuck to the task and almost forced extra-time at the end.
Carryduff were first on the board from a Rory Anderson free after three minutes, but St Brigid's enjoyed a fine spell with Webb kicking a magnificent score in response off his left boot, while Peter Henvey, Rory Brolly and James Smith added points in quick succession to move the Antrim champions three clear after just eight minutes.
They would have to wait another 10 minutes to add to their tally as Carryduff settled into the game and they were on terms soon after when Josh Connery sold a couple of dummies to make a little space and he drilled a fantastic low shot into the net.
John McGough followed with a pointed 45 and Carryduff almost had a second goal straight away, but Pearse Laverty's shot flashed across the face of goal and wide.
Ronan Beatty opened his account from a free on 15 minutes to make it 1-3 to 0-4, while St Brigid's ended a barren spell with Webb kicking another beauty.
The teams went score-for-score for the remainder of the half with Beatty and Connery to the fore for Carryduff, while Webb and Smith raised flags for St Brigid's as the Down side went in at the break leading 1-6 to 0-7.
A Laverty free two minutes after the restart extended the gap to three for Carryduff two minutes after the break, but St Brigid's were level on 34 minutes when Patrick Finnegan was trailed back inside the area as he was about to pull the trigger and a penalty was awarded. Up stepped Peter Henvey and his shot was well-struck high into the net to tie the game at 1-7.
Carryduff made the perfect response as from the restart, they moved straight upfield with Beatty getting on the ball, finding Ciaran Sherry who broke through and squared for Darragh Connolly who rose to palm into the net and restore his side's three-point lead.
Beatty and Owen McCabe added points as it appeared Carryduff were set to pull away, but St Brigid's refused to break as John Blaney and Rory Brolly kicked scores to get them back to within three.
Beatty and Finnegan traded points while Beatty added another from play to make it a four-point game with seven to play, but St Brigid's were far from done.
Five minutes from time, substitute Paul Bradley gathered Peter King's long ball and waited for movement inside. He spotted James Smith in space and played a high ball that Smith rose to meet and brilliantly palm to the corner of the net.
Again, Carryduff went upfield and found the net when Beatty put Connolly in on the right, but while his shot was destined for the net, substitute Eoin Rooney decided to make sure of it by getting his foot to it. However, Rooney was well inside the small square before the ball and the effort was correctly ruled out for a square ball.
St Brigid's took full advantage as they swept upfield and Smith thumped over a great point to level with three to play.
Once more, Carryduff were able to respond. This time, Guinness created space 40 meters out and his shot curled just inside the post with the referee - standing right behind the shot - overruling the umpire who waved it wide.
St Brigid's still had time to save themselves, but they couldn't engineer a score as Carryduff broke away and almost sealed their win, but Rooney's shot crashed off the crossbar to give the Antrim champions one last chance. But with the whistle in referee Martin Conroy's mouth, it was now or never and Brolly had to shoot from an unfavourable distance, the effort tailing right and wide as Carryduff held on.