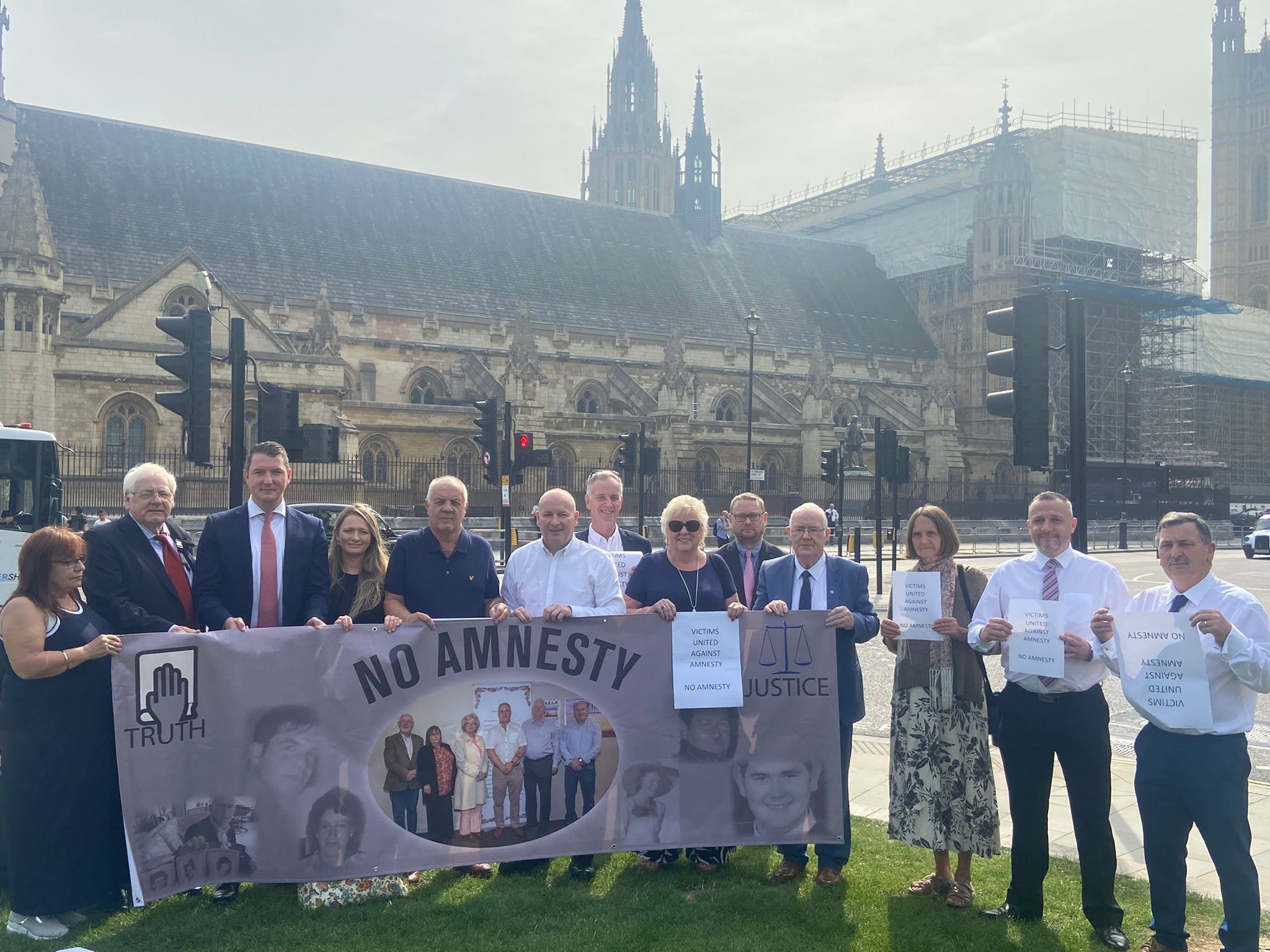 NO AMNESTY FOR MURDER: Relatives are joined by North Belfast MP, John Finucane at Westminster

RELATIVES of people killed during the conflict have held a protest in London against the British government’s decision to bring forward legislation to ban all prosecutions related to the Troubles.

In July, Secretary of State Brandon Lewis announced proposals to create a statute of limitations ending all prosecutions up to April 1998.

The legislation would apply to military veterans as well as ex-paramilitaries, and would also end all legacy inquests and civil actions related to the conflict.

The group included representatives of both state and paramilitary killings including the Ballymurphy Massacre Families, victims of the Sean Graham Bookmakers atrocity, Birmingham Pub bombings families, and Omagh bomb families.

Speaking to the North Belfast News, Raymond McCord, whose 22-year-old son, Raymond Jnr was murdered by the UVF in in 1997, said:  "Our aim is two-fold. Firstly it is to stop these disgusting insane proposals and secondly to highlight what victims and survivors really want.

"Investigations, prosecutions, inquests and civil and legal actions must remain, and there can no amnesty for murder. They are not for negotiation.

"The message and focus is simple, The present and future governments must allow proper due process according to the law to take place. Murder is murder and a crime irrespective of who is involved.

"Brandon Lewis has not spoken to or contacted anyone of us victims going to London and neither him or Boris Johnson speak on behalf of the thousands of victims and families these proposals will affect.

"It is clear they haven't listened to the victims. The British government is not sincere in  claiming they are helping victims and families whose loved ones have been murdered.   Bluntly they have lied to us and the public. They are trying to block and eradicate truth and justice for victims rather than help us.

"Logs and files of the security forces have disappeared relating to bombings and murders with cases of murders closed down for up to 60 years by the government enabling the government to hide their own involvement.

"Brandon Lewis claims the mechanisms in place aren't working. The reason being, the State agencies and successive governments have done everything to ensure they don't work, Ballymurphy and Loughinisland proved that. La Mon House bombing and Kingsmill are further proof of the state's failures which they wish to hide.

"Finally we victims know why the government want to pass these insane justice dismantling proposals, it is to prevent and hide the British government's and security agencies' involvement in murders and with terrorists in the pay of the state. It's certainly not to help victims move on."

Following Monday's events, John Teggart, whose father Daniel Teggart was murdered by the Parachute Regiment in the Ballymurphy Massacre, called for a meeting with the Taoiseach, Micheál Martin, and the Minister for Foreign Affairs, Simon Coveney.

Addressing them, he stated: "We are formally asking to meet Micheál Martin
Taoiseach and leader of Fianna Fáil and Simon Coveney TD Minister for Foreign Affairs and Trade."

"We hope we can forward our campaign with a meeting with you both in the very near future, either in Dublin or Belfast," he added.

The families were joined by North Belfast Sinn Féin MP John Finucane. John's father, human rights solicitor Pat Finucane, was murdered in 1989 by the UFF working in collusion with the British state.

Honoured to stand with families who lost loved ones as we deliver a clear message to British Prime Minister @BorisJohnson today.

The British Government proposals to deal with our past have inflicted grievous hurt & must be scrapped. pic.twitter.com/D9aX9T22Vz

"This afternoon I joined with victims of the conflict and their families who have taken their campaign against amnesty proposals to the heart of the British establishment at Downing Street," said Mr Finucane.

"They have handed in a letter addressed to British Prime Minister, Boris Johnson, outlining their complete opposition to his government’s ludicrous proposals on legacy.

"Signatories of the letter opposing the amnesty represent a diverse range of victims, from right across the community.

"Their demands are very modest; they want access to truth and justice for their loved ones.

"These British Government proposals are designed with one clear objective in mind, to put their state forces above the rule of law and to block families from taking legacy cases to the courts.

"This is in clear breach of the British Governments international human rights obligations.

"Many families have suffered terrible losses at the hands of the British state, both directly through their state forces and surrogates in death squads.

"The very least that victims and their families deserve, many of whom have campaigned for more than 50 years, is access to truth and justice.

"It is time for the British Government to stop insulting victims and their families and to fully implement the legacy mechanisms agreed at Stormont House in December 2014 in a human rights compliant manner.”