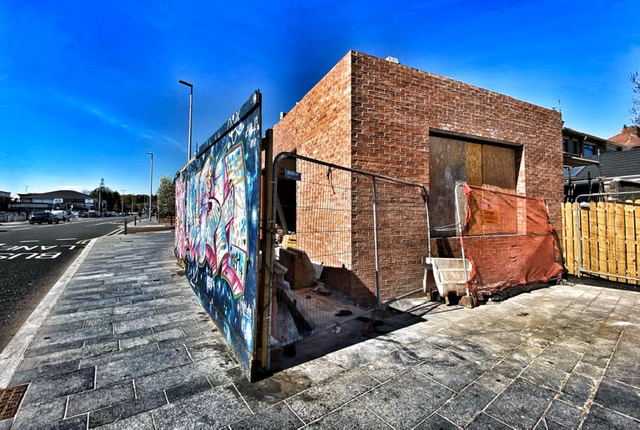 SHUTTERED: (Above and front) The shutdown construction site of the new Arizona Café on the Andersonstown Road.

As business leaders ponder the first steps on the return to normality, the hospitality sector is already weighing up the seemingly insurmountable obstacles blocking the revival of a sector which supports 20,000 jobs in the city of Belfast.

In discussions with pub, restaurant and hotel owners this week, BelfastMedia.com found them firmly united in the belief that bars and hotels could not open their doors as long as the two-metre social distancing rules were in force but at odds about what the future might look like.

"It just wouldn't work for us," says Bamber McMullan who runs Madden's Bar in the city centre. "A bar is all about being social and in a small premises like ours, we can't seat people at different tables wide apart from each other as you may be able to do in a restaurant. So if we are asked to open with reduced capacity, it just wouldn't be worthwhile." Bamber was hopeful that business-as-usual might return at the end of June. "If they keep bars closed until the end of 2020, then most won't survive."

Reacting to speculation that hundreds of restaurants could close due to the Covid-19 crisis, Joanne McKenna of James Street and Hadski's restaurants said patrons needed to better understand how tight restaurant margins are.

"And consumers also need to appreciate the value of eating out especially in terms of supporting local food producers. As we can see from the PPE debacle, if you don’t support local you don’t have it when your really need it."

Joanne said that next week Hadskis in the Cathedral Quarter will start offering takeaway. "While James St could, perhaps, operate with social distancing, Hadskis is much smaller and couldn't so we are we going to see if takeaway is an option."


With much of the developed world still in lockdown and airlines effectively mothballed — there are no passenger flights operating from the Belfast International Airport and just one-a-day on average to Belfast City Airport —  tourism chiefs are looking to 'staycations' as one future strategy. As foreign holidays are being put on the back burner by holiday-makers, breaks at home are being considered by many once normality returns. However, a major obstacle in Ireland is that the market on the island is less than seven million-strong.

"It's not just that people from abroad will be reluctant to holiday in Ireland at all when the Coronavirus is still rampant but even if we reach a stage where the disease transmission is under control, who will want to get on an airplane and sit beside 200 other people?" asked one Belfast restaurant owner.

"And while we are all busting to get the restaurants and bars back open, how do we remain viable if our capacity is reduced from 100, say, to 50 to adhere to social distancing guidelines? That's before we tackle the issue of waiters or bar staff having to wear masks. It certainly will be dining out in a whole new different way."

Patrick Magee of Havana Bank Square restaurant said he had repurposed his restaurant to provide food and soup to food banks, most notably the Community Food Bank in the Duncairn Centre in North Belfast. "But God knows when we will open up again," he said. "It could be two months, six months, who knows?" However, if government support was to end during the period when the business was shuttered it would put Havana Bank Square and the neighbouring bar Sagart "out of business". Patrick has been considering his options under a relaxation of the restrictions. "If we were told we could open but observe social distancing, our restaurant is shaped in such a way which would enable us to do that but it can't happen in the kitchen so really things are very much up in the air."


David Morgan, proprietor of Arizona café on the Lisburn Road, who has been self-isolating with coronavirus symptoms, said operating at half capacity to observe social distancing guidelines "wouldn't work". "Two metre social distancing will be a disaster for cafés," he said. "It can't be policed and if you take out half the customers, it's not worth being open. As staff can be furloughed until the end of June, it would be better to wait until then than to try a partial opening."

The Arizona owner said his Andersonstown Road outlet was just weeks from opening when the shutdown forced his construction team off-site. "I hope construction comes back first," he said, "as it's possible on a small site to observe social distancing and, of course, you are working outdoors which is safer. The workers on my site would be at more risk going to Tesco than in going back to work. I would like to see cafes and restaurants come back first and then, later, bars."

Harry Connolly of West Belfast tourism development agency Fáilte Feirste Thiar said a move to staycations could benefit the area if it managed to awaken the "sleeping giant" which is Southern visitors. "Recent research shows that we aren't getting our share of tourists from the South so that would obviously be a target," he said. "At the minute our focus is on providing as much support as possible to those in the local sector but I am optimistic that when things do come back, local people will support local hospitality businesses which are being hurt hard in this lockdown." Fáilte Feirste Thiar has produced a West Belfast Guide to help tourism and hospitality businesses survive the emergency.


One Belfast hotelier said that while social distancing could become part of life in lounge spaces and even at functions, a block on more than one person at a time using a lift would make it impossible to begin operations. "I can see us reducing the numbers per table at a wedding from ten to eight or even six and I can imagine granny agreeing not to attend due to the heightened risk to older folk but what I can't imagine is that people will dance together again. What a strange world indeed we are going to inhabit."

Yesterday, a £25,000 emergency grant programme for retail, hospitality and leisure businesses went live. But some businesses say that without a rates holiday for the rest of the year, they will be forced to close their doors permanently. Pete Boyle, owner of the 26-store Argento chain which closed its doors on 22 March, wrote this week to Finance Minster Conor Murphy to call for an extension of the three-month rate break which was announced last month.

"The announcement by (British Chancellor) Sanuk on St. Patrick’s Day left us feeling reassured that we would be able to get through this crisis," he wrote. "The understanding was that we would benefit from 12 months rates relief on all our stores and £25,000 payment for each qualifying property. This money would offset against the rents and other overheads which continue to payable and for which Landlords are currently demanding payment in full. Our quarterly rents bill for Argento is about £215,000.

"Until looking into this last week, we were totally unaware that this package is not being applied in NI, despite being available to all our competitors in England, Scotland & Wales. This puts us at a massive disadvantage in terms of economic recovery here in NI or indeed being able to stay afloat in these challenging times. As it stands Argento’s 26 stores will only qualify for 3 months rates relief and one grant of £25,000 (less than £1,000 per store) and the full closure of Let’s Go Hydro will not qualify for any grant help. This is a 94 per cent reduction in the assistance being paid in England, Scotland & Wales."

Pete Boyle also called for landlords to be told by the government that rents would be paid three months in arrears rather than three months ahead, as is normally the case, during the crisis.