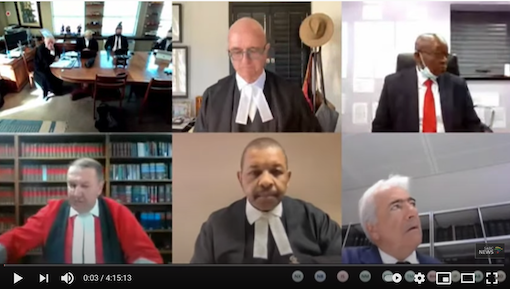 SOUTH Africa has been burning over the past week. There is massive youth unemployment in the country, which was under apartheid rule from 1948 to 1994. The  former President of South Africa, Jacob Zuma, was jailed last week for contempt of court in a corruption case.

He had refused to hand himself to the police after the courts had convicted him. It is reported that Mr Zuma delayed his arrest by some nine hours, which was basically the negotiation period the cops had used to convince him to go to the gaols.

As predicted, Zuma’s supporters formed a human shield to protect the former African National Congress leader from arrest. A few days into his 15-month jail sentence, thousands of people in South Africa have taken to the streets protesting and demanding Zuma’s release. It is also a civil protest which in hindsight questions what apartheid rule did to the people of South Africa, the black population.

Apartheid was up there with slavery and colonialism – the lie that blacks are inferior to everybody else. This system of economic development in South Africa physically separated the blacks from whites and other races. Millions of young black people in South Africa today do not have jobs because of apartheid.

To the protesters, the problem with the arrest and jailing of Zuma is unequal justice. They are angry that thousands of white people who were part of the inhuman apartheid and who committed heinous crimes and pillaged the economy for themselves are walking free every day.

This is a fact. The other problem is a transition to black power from the minority white power. Very few blacks are enjoying this power in South Africa. The majority of the so-called ‘Born Frees’ (the youth born after 1994) cannot afford a decent meal. 75 per cent are unemployed. It is a ticking bomb ready to go off.

Then you have some, but not all, post-apartheid right wing South Africans saying things like “shoot the protesters” There are many right wing apartheid era South Africans and some of their descendants who have never woken to the reality that a black woman or man can be their boss in the new dispensation. Their racist mindset does not allow it. So many of this type moved out of the country, mostly to Western Europe and mainly the UK, to feel better.

Not all of them have this weird nostalgia, the type who think their colonial supremacy years were glorious.

They did not know that they were fighting for the landed nobility of England and other places.

I have met a number of elderly veterans of the 1950s British Army in Kenya. When they talk about their war against the African liberation fighters the Mau Mau, they do not feel entitlement. One told me that they sailed into the Port of Kilindini, Mombasa, to fight a war that only protected landed white upper class gentry who had settled in Kenya from Britain.

At 18 all they wanted was a job, they did not know any better until they encountered the Kenyan rebellion.

Racism is deeply rooted in the United Kingdom. I would like to think of just one week when I won’t write about it, but that is a dream. So, after England lost the Euro 2021 football finals to Italy on penalties, the racist brigade did what they do best on social media. There are hundreds of wild, illegal comments typifying blacks as subhuman because the three English players who lost the penalties are not white. These racial comments were everywhere on Northern Ireland social media.

There is a particularly disturbing video of four young women here in Northern Ireland who headlined their video “Always the f****** n******” in protest at the results of the Anglo-Italian game. It is morons like this who really need a lot of help to respect themselves, they are on video and people know who they are and this will be remembered forever.