When sport really does change lives 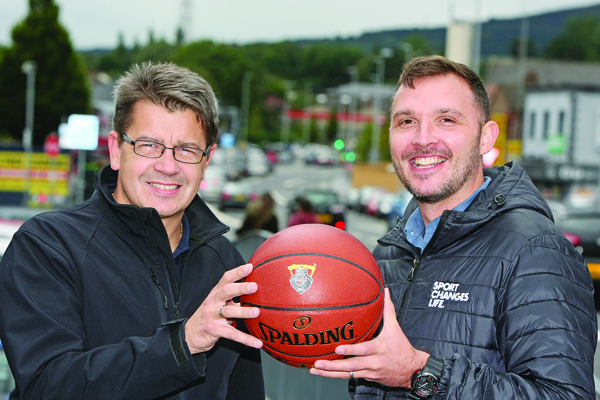 IT may be something of a cliché, but that doesn’t make the notion that sport can change lives any less true.

That is certainly the mantra adhered to by two West Belfast natives who have used the Sport Changes Life foundation to make a positive impact in communities throughout Belfast.

La Salle past pupils and ex-Irish basketball internationals, Gareth Maguire (CEO and founder) and Marc Mulholland, have used their collective love of hoops to help young people throughout the city realise their dreams.

Their marquee event, the Basketball Hall of Fame Belfast Classic will take place for the second time from November 29-December 1 at the SSE Arena and will double from four to eight NCAA College teams over the three days.

This is not an exercise in personal glory, as Sport Changes Lives is now as it always has been – making a difference to the lives of young people throughout the city.

“The Sport Changes Life Foundation that has been working for the past eight years was always about working with young people,” said Marc, Executive Director of the Belfast Classic.

“Coming from West Belfast, one of the big things that hit home for us was working with the young people in our local community.

“The idea was that when working with young people, we wanted to find a better way of inspiring people through our two main programmes – the eHoops Programme and Victory Scholar Programme.”

The eHoops is a 24-week engagement with young people from disadvantaged areas, running in tandem with Victory Scholars, which is a programme where scholar athletes from the United States travel to study at Ulster University.

“Sport Changes Life is all about trying to create opportunities,” said Gareth, who set up the foundation with his wife, Professor Deirdre Brennan and Mark Marais.

“I think one of the key elements what we wanted to do was to try and utilise the key elements we experienced of community, togetherness and support – all the mechanisms you get in West Belfast and we use sport to do that.

“We are there for young people and to help them, no matter what their background is.”

Around five years ago, Marc and Gareth received a call from an eHoops member who was dealing with a mental health issue.

The pair arranged to meet the young man outside TK One on the Andersonstown Road and while waiting, the conversation turned to what inspired them growing up and their common love of basketball.
“What we had, in the words of Terri Hooley is that ‘Belfast has the reason’ and we had the reason,” added Marc.

“We wanted to give young people from Belfast the opportunity to see something different that may inspire them, so the Belfast Classic was born.

“What we are doing is trying to raise money so we can go and help these young people and convey the positive message we are getting across, because we are seeing massive changes.

“We ran an eHoops Programme over in Jordanstown for a lot of the young people who were hanging about there in Andersonstown and it was a massive benefit to not only them, but the whole community as now, you don’t have anywhere near the same number just hanging about.

“They wanted jobs or a career path and that is what Sport Changes Lives essentially does.”

Of course, an event of this magnitude did not happen overnight.
It has taken a lot of blood, sweat and tears with both men virtually organizing the whole event themselves, although they do credit Belfast City Council, Tourism Ireland, Tourism NI and the Rory Foundation for their help, as well as patrons such as recently retired Kerry Gaelic footballer and Irish basketball international, Kieran Donaghy.

One major stumbling block was actually getting the teams to participate, but thanks to their links with athletes who have taken part in their programmes, Mark explained: “For us, it was basketball and through the Victory Scholarship Programme, we had partners in the Mac Conference (Mid-American Conference) who helped us work with the NCAA to change some rules so we could have this event.

“It was a key thing as last year we had the first NCAA basketball tournament with four teams in Europe. This time we’re having the first ever eight-team tournament.”

While the accents on the court may be indisputably North American, there will be a local feel with the two groups, comprising of four teams each, aptly named Samson and Goliath fighting it out for a Belfast Crystal Trophy.

The event, broadcast throughout the United States by television network CBS into around 60 million homes, has put Belfast on the map and coveys the overall message that sport can indeed change lives, be they personally or that of a city.

“It’s been a hard road to get to this point as cash is very difficult and we have no Stormont,” added Gareth.

“We have a great opportunity to create something global for this city.
“The event is about promoting Belfast, letting the world know what a wonderful place this is and also raising the aspirations of kids.

“I think what has happened is that the expectations weren’t there and there was a lot of shock in terms of the return we got for that (2017) event.

“There is no doubt the final will be sold-out, but we have basically had to do this on our own.”

While the opportunity to give people of the city the opportunity to watch top-class sport is of course a major factor in the event, there is also a bigger picture and the hope is that the estimated 26,000 who will take in the event over the three days can come away feeling inspired and with a positive outlook to take into their daily lives.

“For some of the kids, this may even just mean they meet new friends and it gets them out of the environment they are stuck in,” Mark outlined.

“In the age of social media where people are so connected we have never been as disconnected so this gives us the opportunity to pack the SSE Arena out over three days.

“NCAA basketball is all about fast-paced excitement, so if we can create that positive energy in some person’s life, that gives us something to build on throughout the year.”