Who can use the new bus lanes? 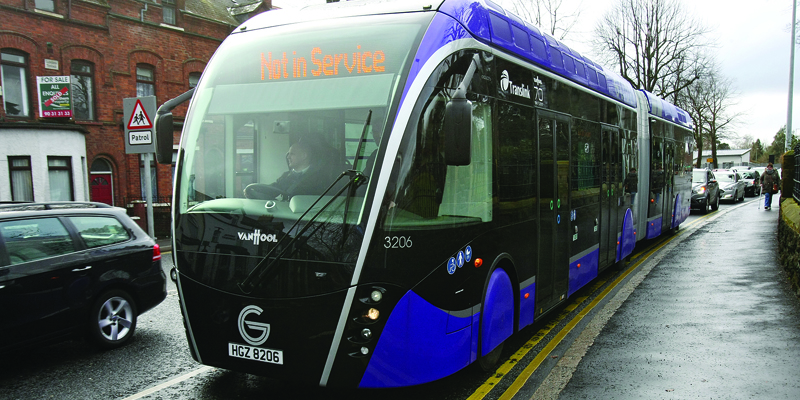 ON THE ROAD: The new Gliders will be operational in West Belfast in two weeks’ time

WITH just weeks to go until the launch of the Glider, as part of the Belfast Rapid Transit system (BRT), the 12 hour bus lanes to accommodate the new transport system are up and running.

However, there is still confusion over just who can and cannot continue to use the bus lanes inside these 12 hours.

A spokesperson for the Department for Infrastructure explained there is specific legislation in place for each bus lane, which determines when the bus lane is in operation and which vehicles are permitted to use it.

“Normally the bus lanes can be used by buses which can carry more than eight passengers,” he explained. “The bus must therefore have 10 seats or more, including the driver – this includes coaches and minibuses.

“Motorcycles (including with a sidecar, provided it has less than four wheels and the unladen weight does not exceed 410kg) and cycles.

“A bus, cycle, motorcycle or permitted taxi may only wait in a bus lane long enough to enable a person to get in or out of the vehicle. The maximum period of waiting is two minutes.

“There is also a four hour period between 10am and 2pm for loading and unloading and for blue badge holders to drop off and pick up.”

Bus lanes are enforced by fixed CCTV cameras and a mobile CCTV camera vehicle recording unauthorised vehicles illegally driving in bus lanes and the PSNI through police officers on the ground along with traffic attendants.

For a general guide to how bus lanes are enforced, including CCTV camera locations, who can use bus lanes, and under what circumstances you can use one if not usually permitted visit https://www.nidirect.gov.uk/articles/enforcement-bus-lanes-and-bus-only-streets