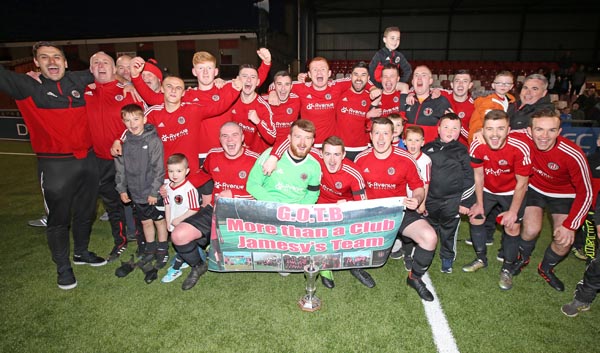 Willowbank’s players and management celebrate following their 2-1 win over Ballysillan Swifts in the final of the Cochrane Corry Cup final at Seaview last Wednesday night. The win secured a remarkable treble for the West Belfast club

Fast forward 12 months and Willowbank have secured a remarkable treble in their first season in the Northern Amateur Football League.

Having secured the Division 2C title and the Junior Shield, Willowbank returned to Seaview last Wednesday night to take on Ballysillan Swifts in the final of the Cochrane Corry Cup.

A 2-1 win for Gerard Murray’s men sealed a stunning treble for the West Belfast side and the Willowbank boss was quick to praise, not just his players, but the entire club for their efforts over the course of the season.

“It’s been fantastic. This is our first year in the amateur league and we’ve won the treble – the league, the Junior Shield and the Cochrane Corry Cup,” said Murray.

“It has been a very successful year, not just for the first team. Our second team also won their league as well.

“The Junior Shield was the big one for us. We beat Harryville Homers in the final.

“They’ve probably been one of the most successful junior teams in recent years.

“We beat them well and that was probably the biggest of our achievements.

“We beat Nortel to the Division 2C title and the competition was tough.

“It has been great to get in to the amateur league and to demonstrate what we can do.”

In reflecting on the achievements of this season, Murray also paid tribute to club legend James Moore, who passed away last year.

“Everybody at the club can take a great deal of pride in what has been achieved this year,” added Murray.

“I’d like to dedicate the success of the first team to James and his family.

“He was a much-loved character and he was a fantastic footballer as well.

“It was a huge blow to everybody last year losing James. It is great to have the success this season to honour his memory.”

Murray, who returned to Willowbank last year, feels as though the right structures are in place for the club to make further process in the years ahead.

“I came back to the club during the summer. I played for Willowbank when I was a teenager,” said the Willowbank manager.

“They won the double last year in the Belfast and District League. We’ve built on that success and we’ve kicked on from there.

“The likes of Geordie McCabe (chairman) and Jim Kettle (secretary) have really worked on the junior set-up and it is a coach’s dream to come into this set-up. Every age group is successful and is winning trophies.

“We had a lot of games postponed early in the season, which meant we had to play 13 games in 25 days in April.

“I had to rotate the squad and I think I used maybe 40 players throughout the season, but we won every game in that period.

“It was crucial and that was down to the strength-in-depth of the squad.

“I’ve a great team around me as well, the likes of Declan McCrory, who I’d say is the best coach in junior football.”

However, it wasn’t all plain sailing for Willowbank this season. With no ground of their own, Willowbank were forced to play their home games at Suffolk Park.

Club officials are understood to be working behind the scenes to secure the use of Coláiste Feirste in the near future.

“The challenge for us moving forward is getting sorted with a pitch,” stated Murray.

“It would be great to have a pitch suitable for the type of football we play.

“We had initially agreed to get the use of Coláiste Feirste, but the pitch markings that were put down on the soccer pitch didn’t meet the amateur league requirements.

“It means that we can’t use a pitch which is right on our doorstep which is an absolute shame.

“I know that some of our local elected representatives are working with the school to try and find a solution to that.”