‘You look back and wonder how different life would have been’ 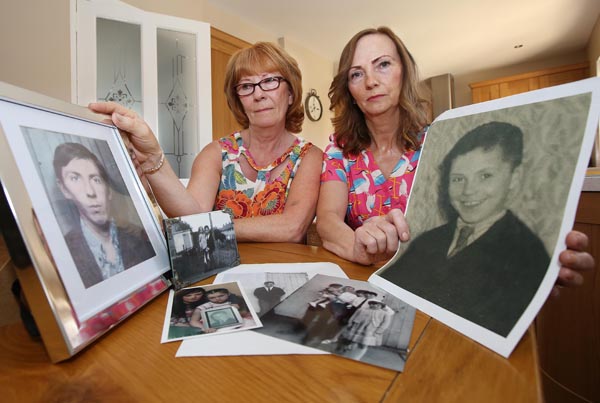 John Laverty was born on the 3rd of April 1951. He was the fifth child of eleven to be born to parents Mary and Thomas Laverty. Originally from Ardoyne, the large family was delighted to be allocated a house in the new Ballymurphy estate.

John was six feet tall, and his height earned him the name ‘Big John’. He will always be remembered by his family as thoughtful and good-natured. Before his death he worked for Belfast City Council and got on well with all of his workmates. He never drank alcohol but he loved a bet on the horses. He loved music and even fancied himself as a bit of a singer. John would often be heard singing ‘Needles and Pins’ in his bedroom, which resulted in his sisters banging the walls as they didn’t fancy his talent as much as he did.

When internment started and trouble broke out in Ballymurphy in August 1971, John left his young sisters at the local community centre where they had to wait on a bus to transfer them to a refugee camp in Kildare. They returned home on the August 13. John was buried on August 16.

At roughly 4am on August 11, the 20-year-old was shot and killed by soldiers from the British Army’s Parachute Regiment. The Parachute Regiment’s account states that John was firing at the army and was killed as the army responded. John was unarmed and ballistic and forensic evidence tested at the time disproved the army’s testimony.

“When we were growing up our four boys all shared a room, until our Tommy got married in 1970,” recalls Rita. “The craic, the banter and the laughs from that room are something we will always remember.

“The noise in our house was unreal when we were growing up, you had to go outside to get a bit of peace and quiet. The boys did nothing but play jokes on each other and us. But when our John was murdered a lull came over our house, the fun and laughter just disappeared.”

On the night that John was murdered, he and his brother Terry had heard the bin lids banging and had gone out to see what was going on. Terry was arrested and charged with riotous behavior, he served six months in prison. After years of campaigning the charges were dropped and Terry’s name was cleared.

Rita said: “Our Terry was arrested the same night John was murdered. There were 36 hours – almost two days – when my mummy had no idea where her two sons were. She paced up and down the path, when the curfew was lifted mummy and some neighbours tried to find out what happened to John and Terry. The Paras shot at them, mummy remembers crouching and hearing a bullet whizzing past her ear. She later said ‘Little did I know my son was lying dead at that stage’.

“My friend told me that she will never forget the morning that mummy was told John was dead, she said she heard a piercing squeal. She said by the time she got to our house my mummy was being held down on the settee, she was frantic and devastated. She thought both her sons were dead, the doctor had to sedate her.”

Rita continued: “We never saw our John dead, so it’s hard to take. For the first few years my mummy used to think, ‘maybe that was somebody else because I never saw my son in a coffin, I never seen him dead’. It was her only comfort.

“I found out when we were in the refugee camp in Kildare. I saw my sister Susie crying, the priest was with her, Carmel was outside oblivious to what was going on.

“The priest then told me John was dead but I didn’t believe it, I was convinced it was a mistake.

Carmel added: “I can remember mummy pleading with my aunt Lena – she wanted the coffin open. She had her arms round the coffin, pleading, she needed to see him.

“She then started saying ‘that’s not my John in that coffin; he could be lying somewhere with amnesia; they’re holding my son somewhere; look how long they held our Terry for’.

Describing how Terry found out the devastating news about his beloved brother, Rita said: “We heard Terry was being held in Townsend Street and he was up in court. My daddy ended up having to go and tell him. I have no idea how we got through those months.”
Carmel added: “Our Terry is a victim, the turmoil he went through, we will never know. Over the years he has told us bits and pieces.

“Terry’s clothes were ripped to pieces. They took his shoes and socks off him and made him walk over glass. He was spread-eagled at St Aidan’s school and they threatened to shot him, they clicked the gun but there was no magazine in it. He was made to run the gauntlet in Girdwood Barracks where they also flushed his head down the toilet, and that’s only fragments of what happened to him.

“People talk about ripple effects – in 2015 our Terry was cleared of riotous behaviour, he was completely vindicated of any wrongdoing. Terry’s wife Lily died three weeks later, she didn’t even live to see the triumph of it all. Terry’s family still suffer to this day, the trauma will never leave him.”

Rita added: “When Terry got out of jail he slept on the sofa, he refused to sleep in bed. Mummy always tried to convince him to go upstairs, but he couldn’t go up to that room that he once shared with his brothers, it was too painful for him. He was jailed for six months, he should have been with us for those months, grieving, that always gets me more than anything.”

Carmel continued: “When John was murdered Rita was 14 and I was eight. Mummy used to collect me from school and bring me straight to the grave yard. I was also brought to Mass all the time. I was the youngest so I was brought everywhere with her.

“I remember the January after John died, for some reason one day I wasn’t collected from school and I walked down with my friends and daddy said ‘just you sit here with me love’. I asked where mummy was, I later found out mummy was inside smashing all the dishes.
“She had been putting the plates out for dinner and had put a plate out for our John. She just fell apart.”

Rita said John’s murder took its toll on their father.

“He was 61 when he died, it was as a repercussion of John’s death. A lot of focus goes on the woman when something tragic happens to a child, but John and Terry were our daddy’s sons as well.

“They didn’t just murder our John and sentence our Terry, they sentenced an entire family. You think back and wonder how different life would have been. Would we have been over anxious mothers if this hadn’t happened? Both myself and Carmel don’t drink and that’s because we like to be in control. I need to make sure everything and everyone is safe and okay.”

Rita added: “We have to keep fighting to clear our loved ones names, that’s why we still to this day are asking for any witnesses to come forward with information no matter how big or small. We owe it to our loved ones. The truth needs to be told.”