A dragonfly for every county 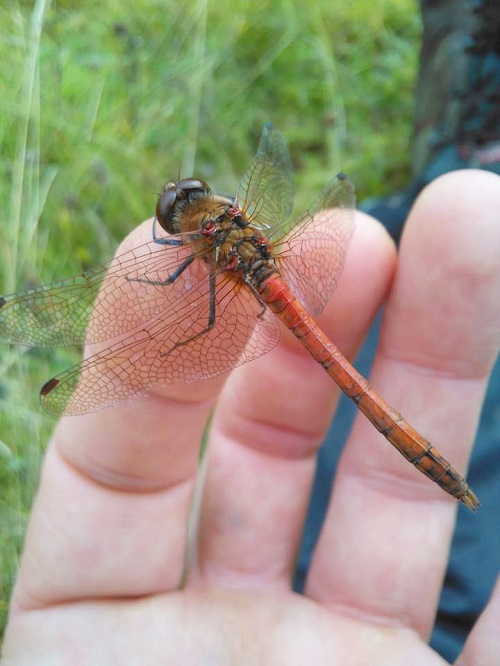 This a creature that inevitably creates a smile on everyone's face. And it's probably that we are all thinking: just how can nature produce something so beautiful? This dragonfly landed on the hand of a West Belfast hillwalker who goes by the name of Rob Smith and he was able to take this incredible picture with his mobile phone near Colin Glen.

Dúlra doesn’t know much about dragonflies but he can identify this one no problem. It’s the only one of Ireland’s 32 dragonflies – an easy fact to remember as it means there’s one for each county – that is red, and hence the name the large red damselfly, béchuil dhearg mhór in Irish. It’s officially a damselfly rather than a dragonfly – damselflies are smaller – but to everyone but the experts, they can all be lumped together as dragonflies. One of the characteristics of a dragonfly is that it has transparent wings, something that can be seen clearly in Rob’s picture.

These creatures are certainly among our most beautiful – they're like the insect equivalent of the kingfisher – and every time one crosses a walker's path when out in the countryside, they are still stunning enough to elicit a “there’s a dragonfly” comment with a finger pointed towards the insect. Everyone will then see it – and be momentarily buoyed by the sheer wonder of it.

Dragonflies are never far from water, where they lay their eggs – up to 1,500 of them who then spend months growing as larvae before climbing up a reed and metamorphosing into an adult by splitting their skin and emerging as a fully grown dragonfly.
They may look beautiful to us, but to smaller creatures they are fearsome beasts. They bite flies and beetles on the head and then carry them by the legs to a perch – or dinner table – where they eat them head-first.

One thing that always surprises Dúlra when he comes across a dragonfly on his danders across the Belfast hills is their speed. These see-through wings seem to power them along – swallows are among the few birds that manage to catch them. The good news about dragonflies is that they are getting more common. Not everywhere, but just in northern regions. It’s believed that global warming is extending their territories and today many species that were once only found in the warmer south of Ireland, like the small bluetail, are making their way north. On the other hand, three species that are found in Ireland on the southern reaches of their European habitat are becoming rarer.

And none of our 32 are threatened with extinction even though it seems our wetlands are getting less common – in fact we’ve got four new species since the year 2000 thanks to rising temperatures. One of those newcomers goes by the name of the migrant hawker. Fifty years ago it was unknown even in England, but it has slowly made its way from continental Europe, arriving in the Isle of Man in 1998 and recently it has been seen in north Down.

Dúlra always keeps an eye out for this shiny blue fly, although he has spotted its cousin the common hawker on Colin Mountain. It’s always great to see a dragonfly. The one thing that Dúlra can’t work out is how Rob got it to land on his hand. Dúlra can do this trick with robins, of course, but the dragonfly is one step better again.