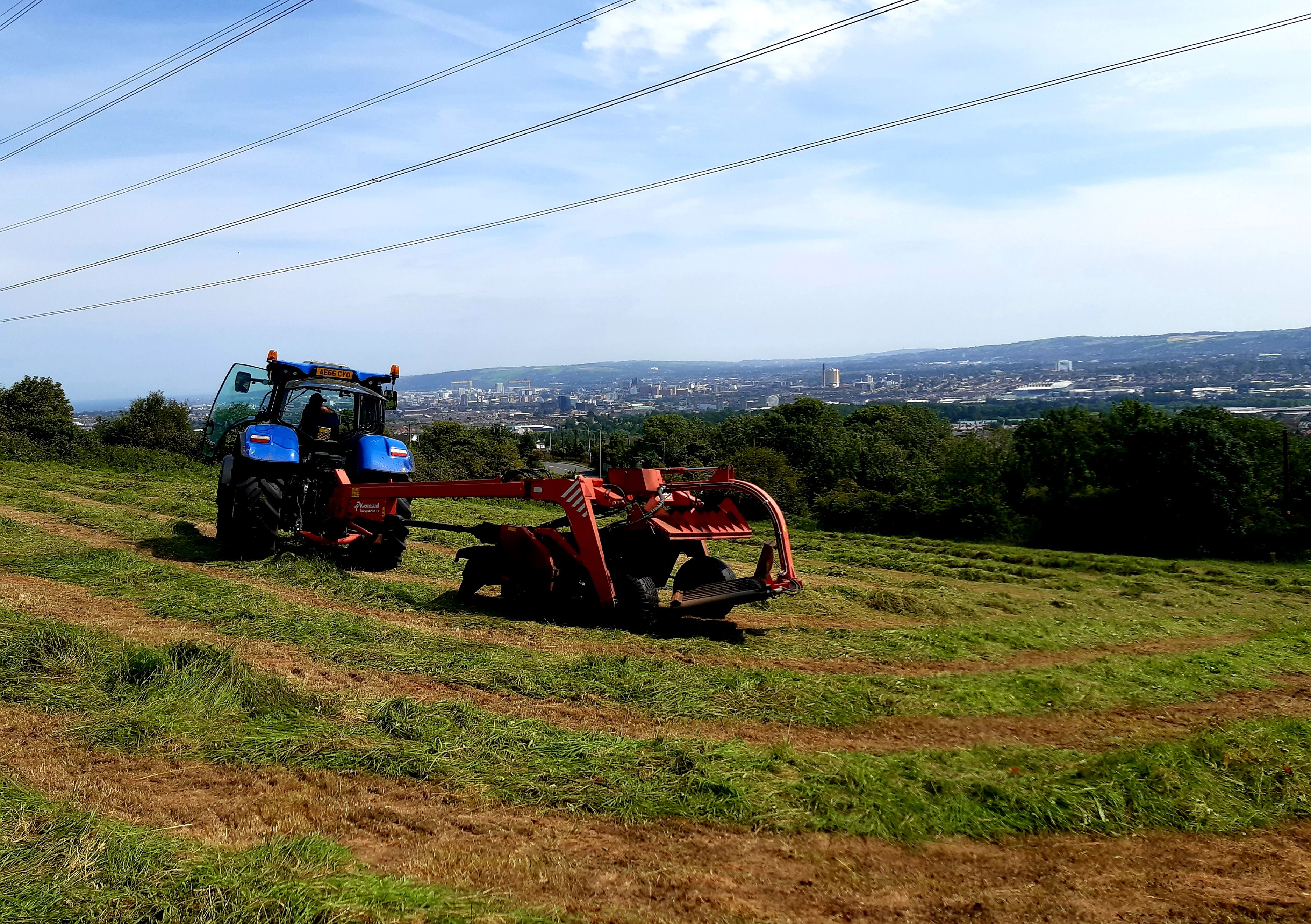 OFFICE VIEW: Farmer Edwin Reid at work in the sun

The wee field here had just been mowed and Edwin Reid was waiting in his tractor for the baler to arrive and finish off the job.

“It’s a great place to be, just admiring that incredible view,” he told Dúlra as he looked over the expanse of the city below.

Crickets still called from the mown grass, their world suddenly turned upside down. But otherwise there was a serenity about this place. On the upper slopes of Black Mountain, wilderness reigns supreme. The hedgerows here are how they looked all over the country just a decade ago before the advent of tractor-mounted cutters that turned Ireland’s famous hedgerows into little more than ornamental boxes.

On these slopes, the hawthorns have been allowed to breathe, with brambles creating ditches on the ground beneath them.

Dúlra was on his way to the old limestone quarry here that’s visible from all over the city. When we were young we called them the ‘White Cliffs’ – but of course they are little more than a scraping on the mountain’s green face.

Dúlra always loved this part of Black Mountain. Its steepness means that people rarely venture here. Even as a fit teenager, his shin muscles would strain at the relentless upwards walk, which was like climbing a giant green ladder.

This week he had to struggle through a mini-forest of hawthorn and hazel which have claimed this hillside. All the while he could hear the sharp squeal of a buzzard overhead – he couldn’t see it for the trees. But onwards he walked until finally he emerged exhausted at the old cliff-face. And there above him was not just one buzzard, but an incredible six of them, all circling like eagles in the blue sky above.

It was a wondrous sight – and Dúlra just rested his weary bones on the grass and admired these fabulous birds of prey – clamhán in Irish – that are multiplying in number all over the country.

It brought back memories of another day long ago at the ‘White Cliffs. It was lunchtime at St Mary’s school below and Dúlra and three pals decided to take the afternoon off. Why sit in chemistry class with the sun splitting the trees? And so Dúlra led his party to his favourite spot high on the mountain above.

When we reached the cliffs we threw a few stones at each other for a while – as you do when you’re 13 – before lying on the thick grass and taking a well-earned break under the summer sun. There was no nicer place in the world.

Chemistry teacher Brother Gallagher never had much time for roll call – as vice-principal he was used to compliance. And so it transpired that we weren’t missed at all.

He was wont to pace the classroom while teaching, and this very day he happened to stand at the window with his back to the class. And there’s no prize for guessing what he spotted on the hill almost a mile away.

We knew nothing of it until he emerged – red-faced and wearing his black ankle-length cassock – from the trees at the bottom of the cliffs. He was too exhausted to roar at us – almost.

He clipped our ears the whole way back down to the school and two weeks’ detention awaited.

But it was worth every minute of that glorious afternoon under the sun on Black Mountain’s white cliffs.